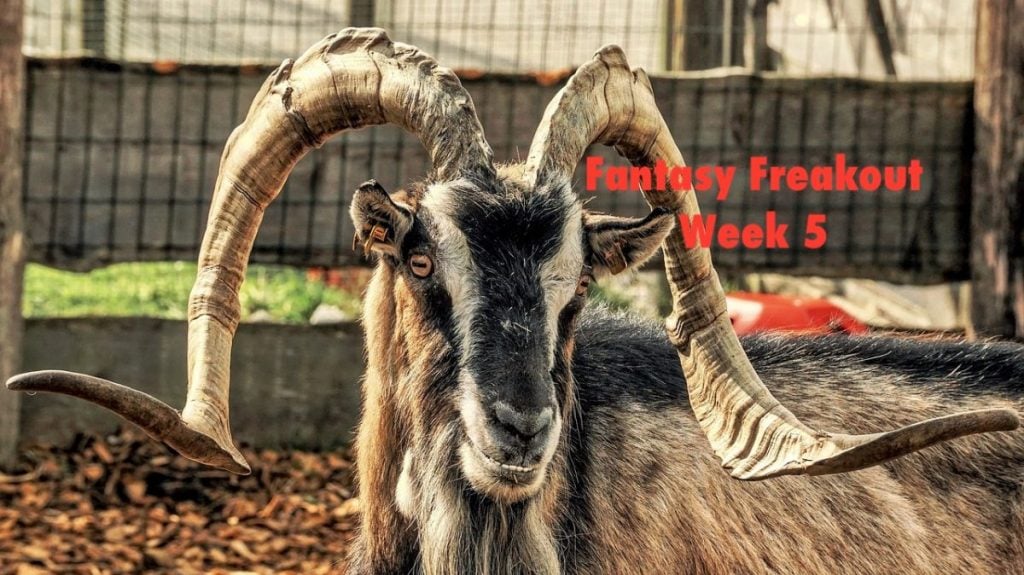 The NFL season is rapidly advancing, and trends are starting to develop — some good, some bad. Meanwhile, some things aren’t turning out like anyone expected. This week in the Fantasy Freakout, John Reinhold tries to make sense of it all.

Week 4 was exciting, and honestly a complete 180 in a lot of ways. We had quite a few players go full Beast Mode and put everything on their backs. Actually carrying people by their knees into the end zone – BEAST!!.

Rookies heard the call, y’all. The Rookie QBs impressed across the board. Mac Jones (Pats) had 19 completions for a record. He looks great on reads, and seems to be fitting in nicely in that system. Even in a loss he was decent; it looked like Brady gave him some support after the game as well. Trevor Lawrence (Jags) looked pretty good even in a loss.  He had no turnovers, had two TD passes, and also ran it in once. You can see the talent, and I suspect if the coach and ownership get their heads straight, good things are in the future. His coach, Urban Meyer, may have lost that locker room, but maybe Lawrence can bring the team under him. He seems to have his head screwed on tighter than his coach. Trey Lance came in to relieve Old Jimmy G, put up two TDs and flashed that big arm.

Two of the best performers were Justin Fields (Da Bears) and Zach Wilson (Jets). Fields had a big bounce-back week that was so refreshing. Bears offensive coordinator Bill Lazor was given back play-calling duties, and wow: he actually put Fields behind center! Coach Matt Nagy’s odd shotgun plays were all pushed out, and Lazor came in with movement and rollouts. Big-arm plays to Mooney and Robinson then happened, as many of us hoped. He was looking downfield for the big play — something us Bears fans have not seen in a long time. David Montgomery was rolling, and basically was the MVP in making it all work.  He went down with an injury that looks to keep him out a few weeks. Fields was named the permanent starter after some head-scratching press conferences with Nagy. A hard road is ahead, and now it’s all on the rookie’s shoulders. But he seems to handle the pressure quite well.

Zach Wilson had probably the biggest week of his career. We knew he had special talent. You can see it in his zip passes. He took it all on his back and just willed that win. Very impressive. Some of those rollouts and passes looked crazy; with defenders in his face, flicking 60 yard passes on the money. He got his win and hopefully they all build from it. Not much to say for Davis Mills (Texans), who had a really tough day against a good defense. He was 1/7 at one point, with 4 interceptions. It was BAD bad. Historically bad, even. But he has been thrust into this position with with little help. Worst loss in franchise history (40-0), and the Bills Defense just came and destroyed.

Tom Brady’s return to Foxboro to play the Patriots actually lived up to the hype. I knew there was no way Brady wouldn’t play his heart out for this one. You see that weird hug from Bill Belichick? It was like the hug you give your relative as a kid because you have to. In watching it on replay, Tom’s reaction was like “Really Bill?” I did hear that he went into the locker room and talked to Brady after the game, however, so maybe that was just Bill being Bill. So much history there — you gotta imagine that their is some real respect.

Is there a bigger MVP QB than Kyler Murray (Cards)? He is just on the level right now. Meanwhile, the Rams took their first loss, and looked a little off. I suspect they will be hungry come next week. Cardinals and Murray are the only 4-0 team. In Pittsburgh, Big Ben is not looking good. It might be time to pull that plug. Coach Mike Tomlin sure seems to think so. You see his look at Aaron Rodgers? They had a moment. Tomlin gave him the “Yo, dude. You’re fire, and it’d be nice to have you here” look. Check it:

Cowboys look good, Dak is locked in and they have so much talent. The line and running game is in sync. Dan Quinn the D coach has the defense playing top notch. Parsons is crazy good. They may finally have it put together and make a run. Carolina was two different teams in this last game. The first half they played so solid; second half was a full collapse. I do have to mention Darnold’s beast mode moments in the first half. He had two power running scores and lots of quick runs. This was an exciting game, at least in the first half. Darnold seems like the comeback player of the year so far.

The Saints lost a tough one to the Giants. Unexpected. There was a beast mode play from Taysom Hill, the second QB/wildcat option guy. He had half the other team on his knees as he dragged them into the end zone. It was wild. You gotta see him breaking like seven tackles.

However it was a tough loss for them. Giants crawled back and just made it an overtime win, with Saquon Barkley putting in the work.There was some chatter about Saints coach Sean Payton’s decisions in this game. Jameis was doing well, and they did good using Taysom as a gadget play. However, it got a little too cute, and resulted in a turnover. I expect this is just a tough loss and Sean as usual will get things straightened out. I personally don’t take issue with his use of two QBs.

Meanwhile, the Colts remembered that Jonathan Taylor should be running more. The Dolphins are a disaster on offense, they can’t get it figured out. The once great Defense has sunk to the bottom of the league. But I don’t think that’s actually the defense’s fault. Time of possession has been tiring out the defense.

Ravens ran, then ran, and continued to run. As they do. So coach John Harbaugh caught some heat on getting the rushing record by running for those last three yards to keep the streak going. I can’t really blame him. Yeah, it’s a little uncouth, but he wants to keep it up and I get it. Broncos coach Vic Fangio was not pleased at all with this, though.

Seahawks got the win against their rival. This gave Russell Wilson a record as fastest player to 100 wins. They have a big game against the Rams coming this week. That’s one not to miss. Chiefs got the win over Philly in a game that saw No Punts. Fourth game to ever have this happen. Mahomes was his usual amazing self. Andy Reid, his coach, became the only coach with 100 wins each for two different franchises.

And finally, Washington had a great game against Atlanta. They hung tough and played hard. Taylor Heinicke is surprising us all; he is making a case to be the future. They won this game not on defense but completely on Heinicke. He was rolling out, making plays with his arms and feet. The defense is still playing below its level, so they should be giving their QB all the love and working towards figuring out pressure issues. Tackling has been an issue, and that feels fixable at least.

Lets get into some fantasy plans…

Play your best players. If you have to decide between a few people, here are some decent matchups on paper. Check injury status as always.

OK, good luck again, everyone. Week 5 has some possible blowout games — keep an eye out.

Fantasy Freakout Week 4: The Good, The Bad, and the Ugly

This week on the Fantasy Freakout: with his actual favorite football team rapidly imploding, John Reinhold attempts to find solace in the... READ MORE

Fantasy Freakout Week 4: The Good, The Bad, and the Ugly

This week on the Fantasy Freakout: with his actual favorite football team rapidly imploding, John Reinhold attempts to find solace in the... READ MORE