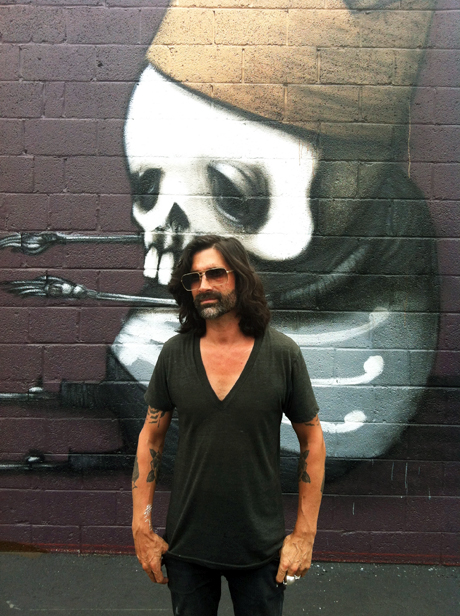 Idle Hands Are The Devil’s Playthings: An Interview With Australian Muralist Stormie Mills

Stormie Mills likes to keep busy. When he was in town for the Richmond Mural Project back in July, we’d scheduled him to do two murals. He ended up doing eight. Opportunities kept coming up, and this Australian artist is not one to say no to work. He even did one piece in a secret location, for Richmonders to discover sometime in the future. Clearly the man loves what he does.

Stormie Mills likes to keep busy. When he was in town for the Richmond Mural Project back in July, we’d scheduled him to do two murals. He ended up doing eight. Opportunities kept coming up, and this Australian artist is not one to say no to work. He even did one piece in a secret location, for Richmonders to discover sometime in the future. Clearly the man loves what he does.

Stormie Mills has been painting for over 25 years, and shows no signs of showing down anytime soon. Originally making his name in his hometown of Perth, he’s been around the world, showing work in London, New York, Tokyo, and Miami, even as he’s continued to build his reputation in Australia, with solo shows over the last two years in Perth, Sydney, and Melbourne. His constant themes of isolation and community vs. conformity are made literal in his work through a restricted palette of black, white, and grey, as well as the use of substances designed for graffiti removal. We discussed his themes of conflict and alienation, the Australian art scene, and what goldfish have to say about life in this conversation recorded while Stormie was in town this summer.

How did you get involved with the Richmond Mural Project?

I got an e-mail from Shane [Pomajambo of Art Whino] just saying, “Would you like to come to Richmond to paint some walls?” At first I thought it was Richmond in Melbourne and then I was like, “What’s this VA thing about?” And it was like, “Ah, Richmond in America.” Of course.

What do you think of Richmond so far?

I really like it, it’s pretty cool. The people are really nice. Cities are cities, it’s people that make a difference. Everyone here seems pretty cool.

Did you start off as an illustrator or have you always been painting? Did you do any graffiti before?

Yeah, I’ve drawn characters of people since I was a little kid. About ’82 I got introduced to the New York style of graffiti, and then I did that for quite awhile. And out of that evolved what I do now.

You do a lot of solitary characters in internal conflicts. You were explaining to me about the goldfish piece you did. You said something about kids getting goldfish. Could you relate that story?

I’m not sure if they still do it, but when I was a kid at a fair you could win a goldfish. I read this thing once–this guy who wrote an article in the New Yorker about the same thing and how he got a goldfish for his child and it’s one of the most simple ways children learn about life and death. The goldfish are pretty hardy fish, but their life is still fragile and when they actually die is when I guess parents talk to their children about how everything dies and why certain people aren’t around or whatever, and explain life and death. I think for me, the idea of a goldfish is a really good metaphor for fragility of life.

To be honest, I’m not 100% sure. My work has always been about isolation. I like to keep to myself, so I kind of just do my own thing. There’s a few people painting walls, but I don’t think it’s huge. It seems that If someone gets motivated to do something, everybody else gets involved, but it’s so sporadic. It’s like they’re do one thing every so often, whereas I like to keep busy. Idle hands are the devil’s playthings. It doesn’t keep me off the streets, though.

Are there any other street artists that you are looking at? Any that you admire or are following now?

There’s a good friend of mine that I’m doing the show in LA with named Matt Doust who’s an amazing oil painter. [He’s] a 25-year-old kid. He’s from Perth originally, then he moved to the US two years ago and he’s like the most talented person I’ve ever met, and he’s an amazing guy. When he lived in Perth he used to go to my studio and I’d go to his studio and look at each other’s work and critique each other’s stuff. [NOTE: This interview was conducted in July. Sadly, Doust passed away on August 28 of an epileptic seizure.] For me, to like someone’s work, I need to like the person. Obviously, [if] it’s their work and it stems from them, a lot of it is about them. And I think if you look at a lot of people’s stuff, if you like it, there’s something you like about them. We look for affinities with each other–that’s how you get along with people and enjoy the same things. The art is probably a visual, easy way to do that.

Do you enjoy gallery work more than mural stuff?

I like them both. There’s a really strong dialogue between what I do on walls and what I do on a canvas for a show or a gallery. I learn things from painting on walls that I put on canvas and I learn things from canvas that I put on walls. For me, the whole idea of painting a wall seems easier than painting a canvas sometimes. There’s already lots of layers and lots of texture on the wall that the surface is inherent with that. With a canvas, you got to mess with the canvas to get those layers and then you start working. I like them both the same.

When you were working on the wall, were you using graffiti remover to smudge it? Your stuff looks like pastels on the walls.

I used to do graffiti and I used to run a lot of projects and programs for kids who wanted to do graffiti. It lead me to be interested in the psychology of those people and what it is that leads them to want to eradicate every sense of human interaction with the rest of the city and why is their belief more important than others. Being involved in that and being harassed by people led to the idea of using graffiti remover, because spray paint was invented as a tool to do something and then they’ve invented all these other things to get rid of graffiti and what people do with spray paint. So, graffiti remover is just another thing that’s been invented and I’d like to somehow incorporate that with my work. For me, it’s a lot like oil painting, but a lot less intimidating.

Are you traveling right now doing murals all over the country or all over the world or are you just here then going back to Australia?

I’m just here for this then going home. I’ve got another big project for Brisbane festival that starts the beginning of September, so I’ll go home for a couple of weeks and then go to Brisbane. Then I’m doing an installation project that goes around the whole city. Then I go from there straight back to LA for a show, and then I get home again at the end of September or early October.

See all of Stormie Mills’ pieces for the Richmond Mural Project at the following locations: