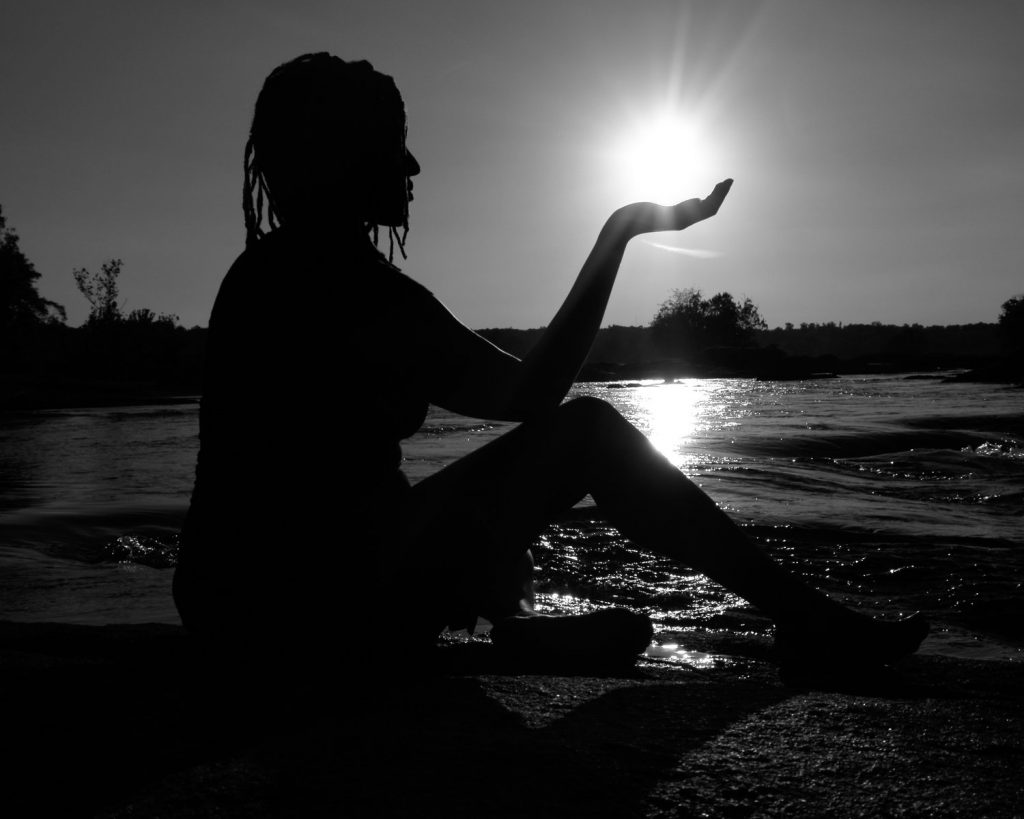 This evening, celebrate women with an art show at The HofGarden, a benefit event for Safe Harbor, a Henrico County-based nonprofit that serves survivors of human trafficking and sexual assault. The show centers around the theme of Intersectional Wonder Women, creating a space that stresses inclusivity and the diversity of experience and identity.

“When women support women, amazing shit happens,” said Sylvia Mallory, owner of Girl Gang Media and a founder of the event. “We have a beautiful show. I’m really excited to share it with Richmond.”

The project is eight months in the making and began largely as a response to the 2016 election. It is a direct action for change, an effort that started small but grew into a project with an extensive team, more than 20 featured artists, and a long list of sponsors. Mallory said it’s a completely, 100 percent donated event. The community came together to put on the show without any prior funding.

“I should say it surprised me, but it really didn’t. Everybody wanted to pitch in any way they could,” said Mallory.

Among those who joined the project is Kortenay Gardiner, a community organizer for the Virginia Interfaith Center for Public Policy, who has become a key team member and chairperson of the show. “It’s really important with where I work, with Safe Harbor, and even our theme, to envision a better world,” said Gardiner.

I sat down with Mallory and Gardiner on the third floor of Richmond’s all-women coworking space, The Broad. Everything there is women made, created, and conceptualized—from the light fixtures to the art, to the books on shelves. Even the music playing over the speakers features all female artists.

It’s a primer for the event to come, and though the space is modern and comfortable, with enough aesthetic appeal to be the “after” shot on a home renovation show, it’s a reminder of how few spaces exist exclusively for women.

Mallory and Gardiner emphasize that this is not just a show to promote women, but to promote inclusive representation of all women, embracing a diversity of race, age, religion, and sexual orientation. That’s where intersectionality comes in.

“Intersectionality is an analytic framework. It tries to look at the interlocking system of power, and its impact on the most marginalized,” said Gardiner. “It’s about the challenges we share, along with the differences.”

“It’s about awareness, recognizing your privileges, and moving to action,” said Mallory. “Sometimes the best course of action is to provide space and get out of the way.”

Intersectionality has been a buzzword these last few years, and it’s a crucial step in resetting the assumptions that are often made about feminism. Feminism that is exclusively about white, cis, straight women, isn’t feminism, and the Intersectional Wonder Women art show is a testament to that. Like The Broad, like the Rihanna playing over the speakers and the passion with which Gardiner and Mallory speak about the event, it carves out a space that says ‘I hear you, I’m here. I’ve got your back.’

The HoF is donating their venue for the night, and each $10 ticket will go directly to Safe Harbor, while each art sale offers a 20 percent direct donation. There will be gift baskets available to win in a drawing that is comprised of almost $4,000 worth of donated goods and services from around the community.

Richmond artist Virginia Strobach donated all of her services–including the illustration of the event poster–and her art, as well. Women-matter donated “Face Behind the Mask” for the drawing, a piece valued at $2,000 by Kraft Art. 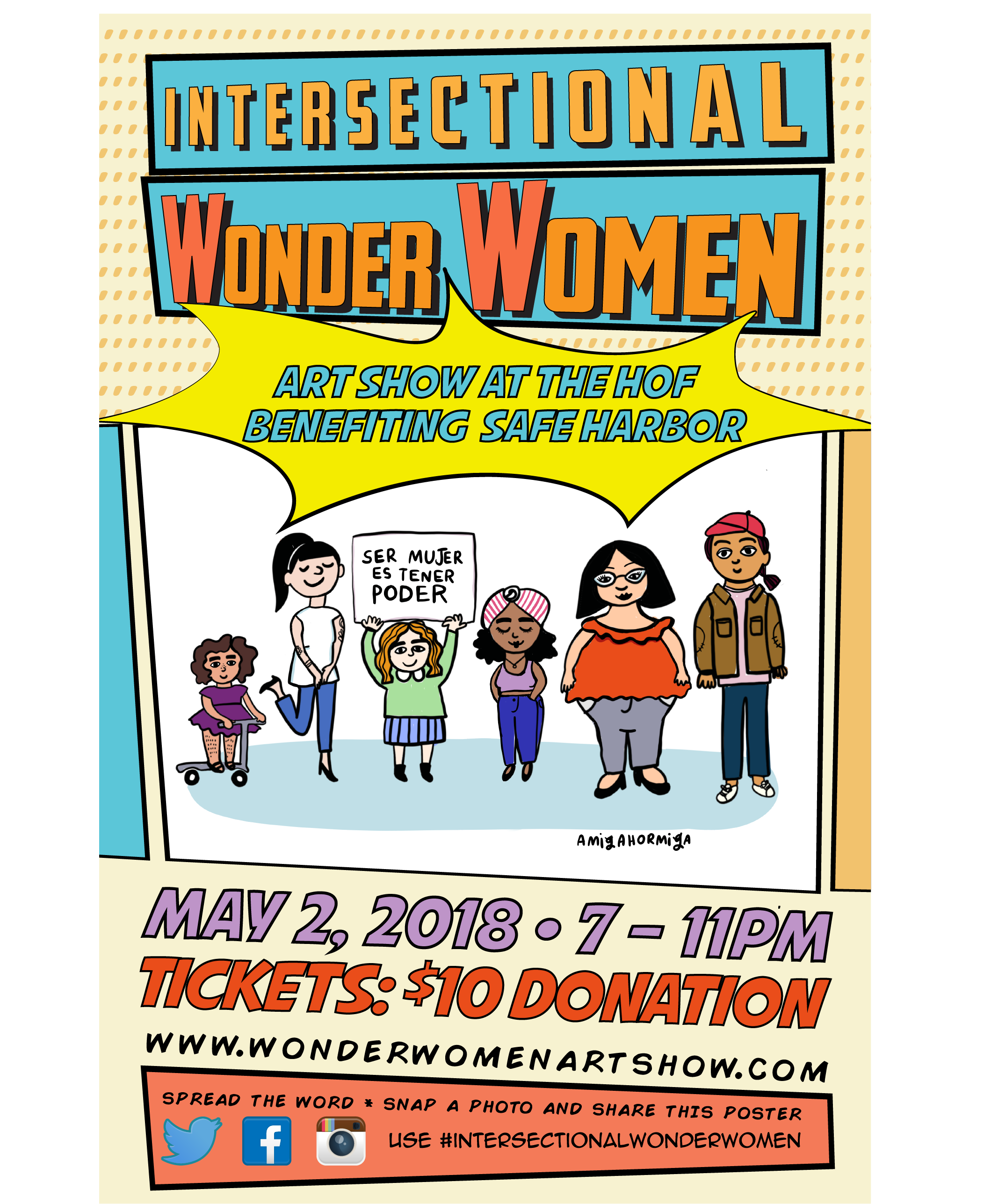 The work itself is diverse, ranging from multimedia, paintings, illustrations, ceramic work, and photography. “Every time I look at them, I fall in love with each one over, and over, and over,” said Mallory.

A favorite of hers is Rebecca Whitson’s piece “don’t grab me by the pussy,” a mannequin donning a necklace of bloody tampons. Mallory said that’s a work she wants to spend some time with, especially because of the dialogue it creates. “It felt like I was re-traumatized all over after a self-admitted rapist was accepted and put into office.”

“Each person’s story is really unique, and that’s obviously shown through the artwork that the artists are going to be exhibiting tomorrow night,” said Maupai.  “We are all phenomenal women in our own right.”

Box office hit Wonder Woman dropped in 2017 as the team was voting on the theme, and while the three of us agreed that we love the movie–it’s hard to resist an island of Amazons, after all–this art show exists to further the social narrative the film introduced.

It’s not tied to any arbitrary hetero plotlines, lack of women, or racial erasure.  “The intersectional part of Wonder Women is reclaiming it,” said Mallory.

“It’s to correct for the erasure of black women in the movie, in the media. Changing it. Centering it a little bit more around us, balance,” said Gardiner. “I want someone to see the superhero within- indestructible no matter what happens. You have the ability and the possibility to overcome.”

The show is about a community of women, a community of people. Gardiner and Mallory say they have Intersectional Wonder Women to thank for their friendship. Maupai, who has been working closely with the team to plan the show, said the same thing: she wouldn’t have met these women, formed these connections and had these conversations any other way.

“Hopefully some of those conversations will not only happen tomorrow night, but they will be carried home and will start a deeper dialogue about the way we perceive each other, how we treat each other, and honor in each other’s story and journey,” said Maupai.

The Intersectional Wonder Women Art Show takes place tonight, May 2 from 7-11 pm at The HofGarden on West Broad Street. You can buy tickets here.

We Need To Talk: The Poe Museum And Mending Walls RVA Sta...

When the Poe Museum boarded up its windows and doors last month, they used it as an opportunity to collaborate with Mending Walls RVA and... READ MORE

We Need To Talk: The Poe Museum And Mending Walls RVA Sta...

When the Poe Museum boarded up its windows and doors last month, they used it as an opportunity to collaborate with Mending Walls RVA and... READ MORE