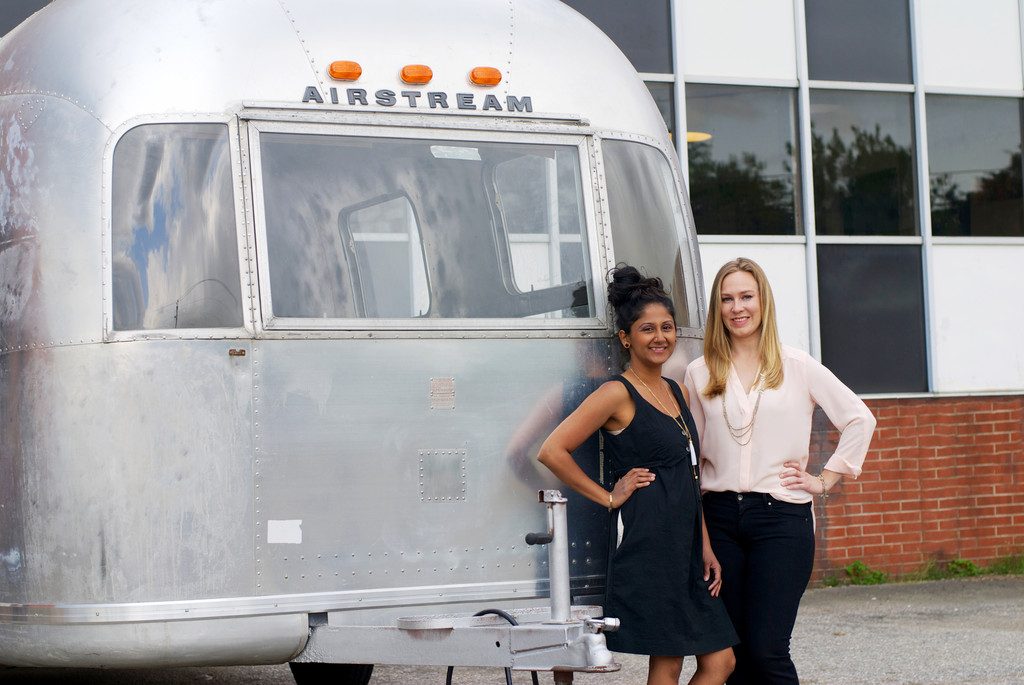 Two local women have taken a 1969 Airstream recreational vehicle and transformed it for their environmentally-friendly new business, Love This.

Two local women have taken a 1969 Airstream recreational vehicle and transformed it for their environmentally-friendly new business, Love This.

Rupa Singh and Amber Lantz wanted to raise awareness for conscious consumerism and combined it with their love for design to launch a collection of handmade jewelry, accessories and home décor from socially conscious brands.

The co-founders started Love This in April 2013, and for the last two years they’ve sold their products online and at festivals, house parties and pop up stores.

Needing a bigger outlet for their fair trade goods, Lantz and Singh launched an indiegogo campaign last year in pursuit of the perfect vessel for their cause and managed to raise $8,600 to purchase and deck out an AirStream RV.

The pair officially got the Airstream rolling this month selling their goods at Hardywood Park Craft Brewery for the A Good Day in RVA music festival, and will continue to travel via the Airsteam to festivals, corporate campuses and house parties.

“We are a retail shop but we’re also about educating the consumer on being more of a conscious consumer,” Singh said. “Finding out who made your products, how did they get them, from x to y and just making sure they understand that, you have the money, you have the power to build with where you spend your money. So if everyone made a conscious decision on what they were buying then we could change the way our supply chain works and make everything fair.”

Lantz and Sing created this brand as an impetus for change and said while they plan to hold onto the Airstream, they hope to eventually have a local storefront.

“We knew that a brick and mortar shop wouldn’t be within our financial reach when we started,” Singh said. “So we thought if we could come up with an idea that would be cost efficient and would let us travel around Richmond. We could introduce people to the movement that we’re trying to be a part of, rather than expect people to come to where we were.”

Singh and Lantz met as volunteers at Ten Thousand Villages, a fair trade retailer in Carytown, where they quickly realized they had similar styles and values.

“We clicked really well,” Singh said. “We just knew we had to do something together. With both our kind of interest in design, background in design and interest in fashion and just our world view on being conscious consumers, and being people who really wanted to change the world by doing something in our lives.”

As the daughter of an interior designer, Lantz would peruse the stacks of her mother’s magazines and “soak up every design element” she could. She has also been a strong activist since her days at VCU.

“In college, I became very socially active and I got involved with the fair trade movement,” she said. “Shortly after graduating I was like, I really want to find something that I can do that melds my interest in design and art and style with making a difference in the world and making a positive impact.”

Lantz joined the Peace Corps where she worked with local artisans in Cameroon developing and marketing their products.

Singh majored in architecture at Virginia Tech and said she’s always been a socially conscious consumer. Aside from her volunteer work at Ten Thousand Villages, Singh served as a Court Appointed Special Advocate for children and volunteered with the Better Housing Coalition in Richmond.

The Airstream will hold items from brands like Sseko Designs and 31 Bits, which help empower the women of Uganda. Both companies employ women in Uganda to design, produce and market their products.

Love This is also partnered with environmentally-conscious brands Faire Collection, Hand in Hand, Goods that Matter, Half United, and Raven + Lily.

“So many people in RVA have been a part of this mobile shop,” Lantz said. “We really wanted to build a community into our business so as we grow, so it feels like everyone’s business if that makes sense.”

Love This will hold its next event at Lamplighter on Addison Street May 29 for the coffee shop’s pop up art festival.

Miss America Brings Her Title-Winning Talent To the Scien...

Miss America Brings Her Title-Winning Talent To the Scien...