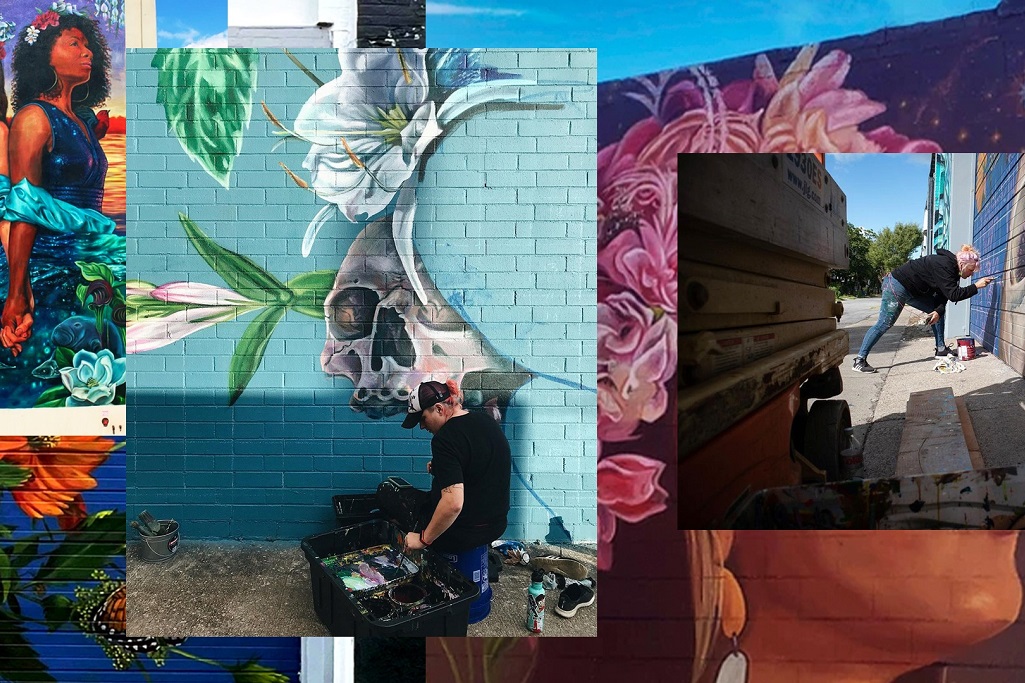 Richmond loves a good mural, and for many of us, the recent occurrence of RVA Street Art Festival’s tenth anniversary reunion at the Canal Walk just whets our appetite. It’s for us, therefore, that Three Notch’d RVA Collab House hosts the Leave Your Mark Mural Fest at their Scott’s Addition this Friday. The plan was originally for the event to last the entire weekend; however, it’s now been downgraded to just Friday due to the impending weather rolling in as Hurricane (now Tropical Storm) Ian makes its way up the East Coast.

So yeah, if you want to be there for this, you’re gonna have to make Friday count. The one-day event will remain the official kickoff of CultureWorks’ artoberVA, a month-long celebration of Richmond’s artistic culture that will last throughout October. There will be an official release of, and toast with, their collaborative beer, Stipple, featuring $3 draft pours at 3 PM. Plus, a limited number of to-go cans will be available, with proceeds from their sale going to Art On Wheels and CultureWorks Richmond.

But if it’s the muralists you really care about, there’s just as good reason for you to show up. There’ll be a meet and greet with the five local muralists who will be decorating Three Notch’d as part of this event: Nico Cathcart, Wingchow, Humble, Dathan Kane, and Prentice Carroll. With the event reduced to one day, we can’t say for sure how much live mural creation there will be to see, but it’ll still be worth it to talk to these five creators, all of whom are either currently located in or have ties to the Commonwealth.

Before the late-breaking truncation of this event due to impending weather, we spoke to the folks over at Three Notch’d to learn about the connection between their brewery and the local art scene, and why they wanted to bring murals by local artists to their walls. Here’s the conversation we had:

What was the inspiration for the Leave Your Mark mural fest?

Our tagline, “Leave Your Mark,” can mean so many different things depending on personal interpretation, so we felt like it was a perfect fit as an artistic theme, and was interesting when juxtaposed with the process of creating murals. We treat our brewing process as an art and our Brewmasters as artists, each with their own style and approach to crafting unique beers. Given our location in Scott’s Addtion and the vibrance that we have seen murals provide to streets around our brewery, we knew there was a killer opportunity to create an event that brought some exposure to the expansion of the new space and our ongoing “Beer is Art” releases, featuring artists collaborating with our brewmasters, galleries/shows and [working on] label/merch design with artists [who are then able] to gain exposure and promote from within our space to our fans/visitors.

How did you choose which artists to work with on this project?

Serendipity. I was driving around Scott’s Addition to find parking one day and saw Nico [Cathcart] on a lift painting a neighborhood mural. I shouted at her while blocking traffic 🙂 We exchanged IG info and I reached out immediately to share with her what we thought was an awesome concept based around local art/artists and the energy their expressions create.  We commissioned Nico for her work inside of the brewery and developed a strong trust in her right away.

Rather than our team making decisions on the artists [for the mural fest] from an office, we asked Nico to help us identify a mix of talent that represented the diversity found in RVA and artists who would bring positive energy to the project. After reviewing some of the artists’ portfolios and learning more about their personal stories, we landed on an incredible mix of five artists that we felt were a perfect fit for the space based on style and diversity.

What sort of themes and guidelines will the artists be working from when they create their murals?

Almost NONE 🙂 We are firm believers in allowing artists to create without guidelines. One of the founding principles of our company is individual expression and the freedom to create without rules/guidelines. We only asked for a few rough sketches to ensure there weren’t any potential issues with the city or our landlord. Otherwise, what you will see being painted during the mural fest is solely a product of the artist and their expression.

During the planning process, we were introduced to Art on Wheels, and after learning about their mission, we immediately knew that the addition of a community mural made perfect sense. Allowing for a tangible “hands-on” experience that requires participation in exchange for the freedom to “Leave Your Mark” permanently on Scott’s Addition just seemed like a no-brainer. How cool is it that people can not only watch some incredibly talented artists working real-time, but they can actually get involved and have a lasting memory to share with friends, family, and everyone in the future?

What can people who come to Three Notch’d this weekend expect from the experience of being at a brewery while six different murals are being created before their eyes?

People rarely get a glimpse of the “process” and fail to understand and appreciate the beauty of the effort required to create incredible art. Often the process itself is as interesting and rewarding as the finished product, but it seldom gets the same attention. If you are an aspiring artist, or just someone who simply has a curiosity or appreciation for painting at a large scale, you get to see in real-time just how different each of the artists approach is to their work. People can grab a beer and hang out while viewing something they may not have ever seen before, happening live right in their own neighborhood! Active participation in our community mural with Art on Wheels is encouraged, and we hope people grab a brush (and a beer) to join in the fun.