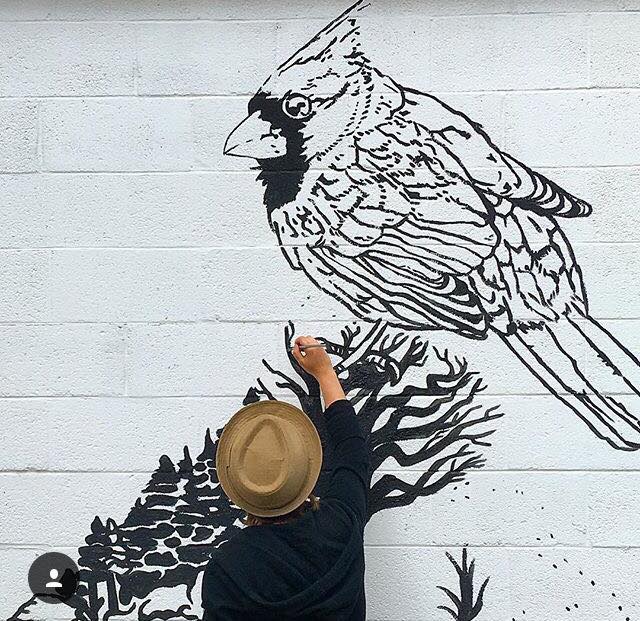 Amelia Blair Langford won the 2016 RVA Street Art Festival Contest back in April for her mural depicting Virginia wildlife. Her winning design is a black and white landscape illustration of indigenous Virginian trees in the shape of the state, topped by an enormous, colorless cardinal bird.

Amelia Blair Langford won the 2016 RVA Street Art Festival Contest back in April for her mural depicting Virginia wildlife. Her winning design is a black and white landscape illustration of indigenous Virginian trees in the shape of the state, topped by an enormous, colorless cardinal bird.

The mural is located at 1 Manchester Rd at the silos, near the flood wall and Mayo Bridge. The piece was originally designed as part of Langford’s “The Treasure Hunt” project, in which she used illustration to represent a locality through art.

“I pull in the inspiration from the community or location that I’m at, so I do site-specific illustrations that finds the treasures from within that community,” said Langford. “I’ll do a lot of research, whether it’s going to a museum or even on a hiking trip to pull what’s unique to that community and do illustrations based on that.”

Langford’s visual representation of Virginia is impressive not only because of its accuracy and familiarity to natives of the state, but also because it is extraordinarily and painstakingly detailed.

The meticulous time and effort that made Langford’s piece worthy of winning at the Street Art Fest becomes doubly remarkable when considering the fact that her design was originally drawn small enough to fit on an ordinary 8×10 sheet of paper.

Depending on the level of detail and the size of the piece, Langford estimates that an 8×10 illustration like the one she enlarged for the festival could take her as many as three weeks to complete. This is because Langford’s art is composed of thousands of minuscule dots and lines, spaced in relation to each other in such a way that they resemble texture and shade, a technique known as stippling.

“There’s just something gratifying knowing that every little hair and every little dot is there on purpose,” said Langford. “The hours that are put into it are a form of expression.”

Langford focuses on one square inch at a time, and finds that this infinitesimally accurate method both relaxes her and realizes her artistic vision. Most of her illustrations are created with ink on paper using a Micron 005 pen, whose precise tips are nearly as sharp as a needle at only .22mm around. Langford also uses graphic design to digitally color or enhance her drawings, some of which she enlarges and paints as murals.

The inspiration for Langford’s art is drawn from the environment around her, and the relationships that she observes between the human and animal worlds.

“A lot of my work is inspired by the connection between animalistic and human interactions,” she said.

Natural perfection inspires her appreciation for meticulous art, and is part of the reason why the majority of her work depicts the natural beauty of wildlife. Langford is also inspired by the ways that nature and folklore have become intertwined so that some animals have come to take on a sort of mythical reputation as a result of human imagination. According to Langford, much of human interaction is based on historical stories and folklore.

Her piece “The Vessel,” (seen below embodies both Langford’s fascination with animal life, and folklore, in the form of a giant octopus.

“I think it ties in my appreciation and love of folklore and the stories that are derived behind vessels, and the idea of what a vessel could be,” said Langford.

Tales of giant sea monsters have struck fear in the hearts of seamen and delight in the eyes of adventurous children for generations. Giant octopuses like the legendary Kraken were said to pull entire sea vessels down to Davy Jones’ locker with the flick of a single tentacle.

Langford decided to turn this narrative of an animal attacking helpless sea vessels on its head by depicting the enormous octopus as a vessel itself, containing tiny sea creatures as passengers inside its body. She achieved this by transforming each of the octopus’s suckers into portholes, as in a submarine, with a different sea creature pictured within each circular window.

“The Vessel” represents Langford’s favorite piece to date, because it combines her passions for nature and folklore in a stylized and subtle way. Langford was commissioned by J KOGI, a Richmond Korean restaurant located at 325 N 2nd St, to paint a mural of “The Vessel” on their interior.

As a native Richmandian and professional artist, Langford has had her work displayed in dozens of local shows since 2011. She has hosted galleries through her artist collective Bonfire RVA, illustrated published books and magazines, and even designed clothing for The New Normal Apparel Company (seen below). Through various projects and residencies, her art has reached audiences across the nation, including showings in New York, South Carolina, and Iowa. Currently, she is working for VCU as the manager of the Grace Street Theater, a position she has held and loved since graduating from the school of the arts in 2012.

To view or purchase Langford’s artwork, visit her Etsy shop here or attend one of her shows.

Upcoming exhibitions of her art include the “Great Southern Season 2: Art Show” in Richmond, Virginia, “Bern the System” in Washington, DC and the “Rurally Good Festival III” in Grinnell, Iowa.

She will also be a participating artist in this year’s “The Sketching West Tour” presented by The Sketchbook Project and Faber-Castell.