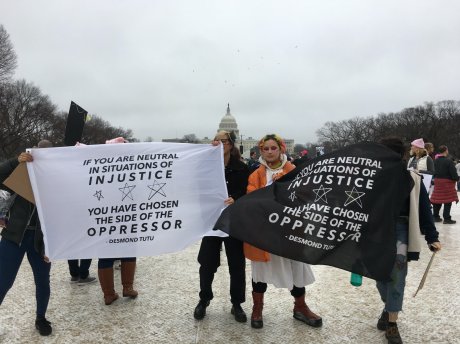 RVA Mag #28: Guards n Flags take claim in the politics of the personal

“I like taking up space. I want to take up so much space because I’m not supposed to,” says Elisa Rios, one-half of the creative force behind Richmond-based screen printing business Guard n Flags, when asked why she and co-owner Emma Barnes started printing flags specifically.

“We’re thinking about taking up space in a certain way, and private vs. public in a certain way,” says Emma. “I truly, really believe in the idea that personal is political and in putting that on display.”

Guard n Flags, which operates out of community art space Studio Two Three, has been in business designing custom flags since August of last year. They’ve worked with Quirk Hotel, Tiny Space, and The Bettys, as well as a multitude of individuals, designing and creating bold, abstract flags, banners, and prints.

Flags of all types, as we know them, have existed for thousands of years. Their origin is a bloody one, soaked in warfare and possession. The notion of taking that back, of reclaiming this large, tangible symbol of proprietary rights — a symbol largely exclusive to the patriarchy — and offering it up to the underdog, is the very crux of Emma and Elisa’s business goals.

“We look at it as taking this thing that has always represented ownership and making it about self-representation,” says Elisa. Emma agrees, adding that flags can go even further for individuals. “We also see waving a flag as taking a stand. Taking things that you deeply connect with emotionally and putting them out there. Personal is political on so many levels.”

With the current political climate, people of all beliefs are finding it more necessary to link the personal to the political. More and more each day, it’s becoming clear that a person can’t exist in our society without being political, not with the divide being this stark, with anger, aggression, and concern constantly and passionately flowing from all sides. Both Emma and Elisa recognize this growing sentiment with Guards n Flag existing as a way to channel this indefinite sentiment.

“I think it was the day after the election that we decided to make the Desmond Tutu flag,” says Elisa. “I wanted it to be huge.” The famed quote, “If you are neutral in situations of injustice, you have chosen the side of the oppressor,” is printed in simple block letters across a commanding 3 foot by 5 foot flag. It’s powerful and it’s emotional and it cannot be missed.

“It’s funny; we had those at the Studio Two Three Winter Print Fair — I think we made ten of them — and we apprehensively hung them up,” says Emma. “We didn’t want to alienate people. But it was crazy. We nearly sold out of them, these huge flags. It was sort of shocking, but it was more so really cool and encouraging.”

When asked how they felt about seeing that particular flag at the Women’s March in January, Elisa’s response is both terse and rooted in ethos: “That’s where it should be.”

As fearless and empowered as the duo can get, Guards n Flags also focuses on the soft and fun aspect of business — on lighthearted quotations and sentiments that bring about feelings of joy and familiarity that can lead to solace. Their catalogue includes Nicki Minaj lyrics (“let’s get lit without a lighter, let’s pull an all-nighter”), a nod to Ginuwine’s greatest hit (“lookin’ for a partner” printed above two ponies), Emma’s own take on the so-mom-it-hurts-but-you-secretly-love-it with “wine a bit,” casual phrases like “Happy Fall Y’all” and “Grin And Beer It,” as well as buntings, cards, and garden flags littered with brightly colored florals.

Guard n Flags operates under the very strong belief that art should be accessible. It should be affordable, even on a large scale. “Print making isn’t viewed as fine art: it’s not a painting, and there are usually multiples, so it’s not valued as much,” says Emma. “But it’s more accessible, it’s cheaper, and it can reach more people. And that’s something we value. We like the idea of having something big that you can hang in your house, that is art, but that isn’t going to cost an insane amount of money.”

To the duo, their business also operates alongside their own interests, as seen by their foray into astrology. Some of their best sellers in fact are zodiac flags, a subject matter that is primarily viewed as feminine, queer, and somewhat frivolous. Correspondingly, it’s something the two feel very strongly about. “Astrology is an icebreaker — it’s a way to get to know people,” says Emma. To Elisa, it’s also a way to break free of her own drawbacks. “As someone who is socially awkward, the zodiac is something I’m obsessed with. It helps me relate to people easily.”

The pair recognize the uneven reputation astrology carries, but feel strongly about their business focus on something so personally intriguing to the two of them. “I know a lot of people hate on the zodiac, and first of all, fuck them. We made flags about it and we’ll wave them in your face,” says Emma, unknowingly uttering what could and should be the official slogan for Guards n Flags.

Elisa is more skeptical on people’s own personal belief. “I think more people like it though. I think most people are into it. Anyone that I’m friends with, if they don’t really understand or believe in astrology, tell me one year later that they’re not asking me about their sign’s compatibility with their potential hook-up’s.”

Astrology can be therapeutic. It can be helpful. For some, it’s calming and enlightening to be able to relate a recent rough period with Mercury’s retrograde. “It’s really about self-reflection,” says Emma. “Which is really important, to be a person in this world and to be self-reflective,” Elisa quickly adds.

“Sorry to white men who don’t do that,” they both say… with volition.

Guard n Flags manages to exist in a space where not many businesses do: they’re fun, they’re silly, and they’re sweet, yet they also fiercely announce and claim their progressive politics. As a business, they represent the feelings and the dichotomy a lot of young-non-cis-white-male people grapple with: wanting to exist as an ebullient entity while powerfully and relentlessly demanding space for themselves and their voices to be heard. And when that space is finally given or taken, their stirring flags will be there representing just what each stands for… in a way that no one can ignore. 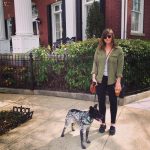