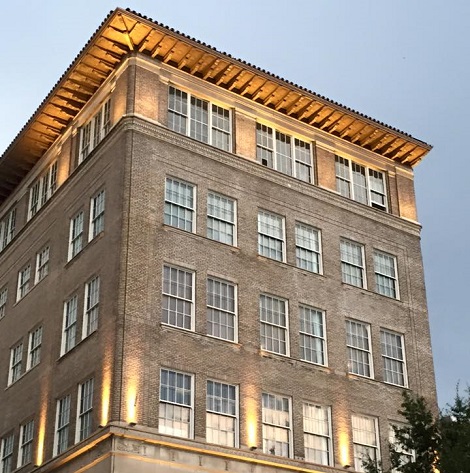 Broad Street’s growing Arts District has welcomed a new addition with the opening of Quirk Hotel. The hotel’s opening, Sept.

Broad Street’s growing Arts District has welcomed a new addition with the opening of Quirk Hotel. The hotel’s opening, Sept. 17, occured just in time for the commencement of the UCI World Road Cycling Championships, and offers visitors a prime example of Richmond’s growing reputation as an arts and culture destination. Co-owners Ted and Katie Ukrop want Quirk Hotel and gallery to serve as a gathering place for both locals and visitors.

“I want locals to love it, and come hang out, and I want out-of-towners to come and realize all the talent we have here,” said Katie Ukrop. The opening of Quirk Hotel and gallery offers a glimpse of Richmond’s thriving new downtown. There have been similar revitalization projects downtown buildings recently, but according to Kate M. Brown, Director of Sales and Marketing for the hotel, the process has been a “labor of love.” A quick tour of the hotel shows that sentiment is very much true.

The six-story, 60,000-square-foot building, which now contains 74 hotel rooms, was originally constructed in 1916 as one of the city’s department stores, J.B. Mosby & Co. In constructing the hotel, many of the elements of its time as Mosby and Co. have remained.

Each of the hotel’s 74 guest rooms will feature artwork by both local and national artists alike. Several room pieces including pink ice buckets, scoops and vanity trays by artist Tina Frey will be for sale. Pillows and bedding will also be for sale. Pink is the signature color for the hotel, reflected in the signage and room numbers.

Next door and accessible from the lobby, is the relocated Quirk gallery. It occupies a former toy store built around 1903. The first thing noticed about the building is the roofless atrium. The new gallery also features a beautiful open-air courtyard. The floor is made of three-inch thick slabs of marble, weighing 100 pounds each. The space can be rented out for weddings and special events.

Traveling back to the lobby, guests can dine at the hotel’s Maple and Pine Restaurant, named for the original wood floors featured in several of the rooms. The restaurant is headed by Chef David Dunlap and focuses on artisan cuisine featuring local ingredients and classic southern traditions. About 30 people will encompass the food and beverage staff. Menu items include a breakfast parfait with blackberries, and for lunch, fried chicken with a potato puree, a corn and bean succotash, and bay leaf crumble.

For locals and visitors looking to book a stay, the rate for a room is $269 a night midweek and $289 a night on weekends during the busy season. It will drop to the high $190s during the soft period — November, December and January, said Brown.

Check out more about Quirk Hotel, which is located at 201 W Broad St., here.