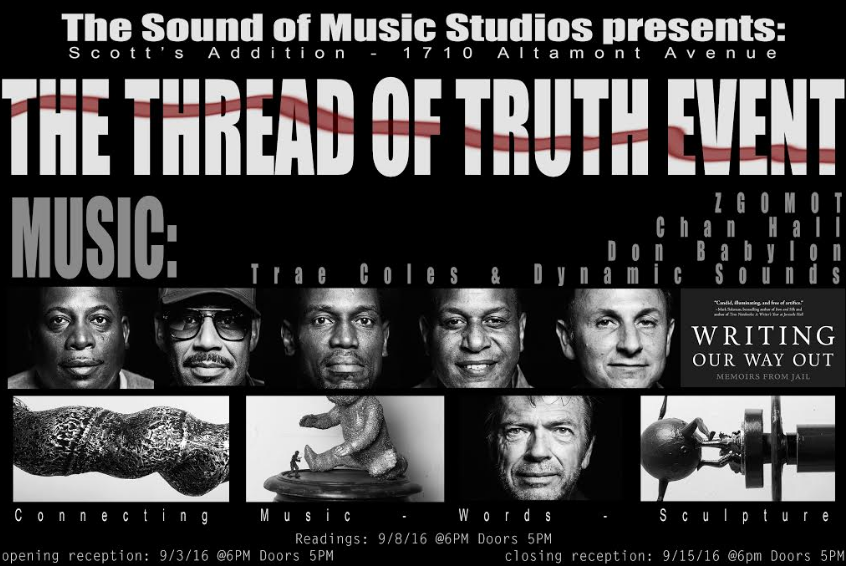 Developed separately, their projects will interact in the event space from September 3rd through 10th, informing each other in a meditation on truth and actualization.

Jim Maris is exhibiting ~12 new works of his assemblage-style sculptures in a narrative of age and unlikely beauty.

VCU professor, Dr. Dave Coogan, will be sharing selected readings from his book Writing Our Way Out: Memoirs from Jail—the memoir of his teaching ten men at the Richmond City Jail to write their ways out of the cycle of crime.

“Were the lives of humans ever to be fully realized, I believe there would be neither a desire nor a need for art of any kind,” said Maris in a statement released with the show announcement. “In the meantime, I exist as a member of the community of artists known as sculptors. My work is an ongoing attempt to shape platforms that encourage and allow metaphorical”

As for Coogan, he’s aimed to detail the formative and transformative memories of ten men with Writing Our Way Out. He considers it the creative culmination of a writing class that began in the Richmond City Jail in Virginia, and grew into a journey of re-entry.

“In a decade process from the first writing class to published book, the writing workshop started at the jail, evolved into a pen pal program when the men were sent to prison, and culminates when they were released to begin their new lives,” he said. “This is a work of creative non-fiction. Itʼs my memoir of teaching a writing class to prisoners. Itʼs ten prisonersʼ memoirs, written with this hope in mind: that each man might understand the story of his life, and in so doing, change its course.”

Coogan will be accompanied reading with some of his students involved in the Writing Our Way Out project on Thursday Sept. 8th Opening and closing receptions will be held on each respective Saturday, as well as a Second Thursdays reception on the 8th as part of the Scottʼs Addition Boulevard Association Art Walk—with accompanying musical performances and refreshments.

Suggested donation of $5 for event entry.