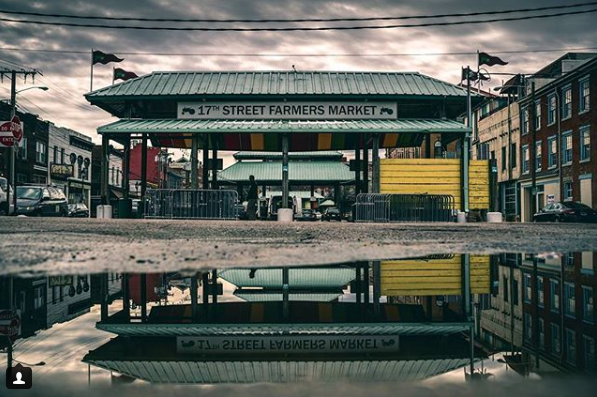 Richmond-based photographer Chris Smart clearly has a unique aesthetic. From the surface, it looks dystopian and reminiscent of films such as 28 Days Later, Ghost in the Shell, and anything that Phillip K. Dick ever thought to put his cyberpunk hands on.  However, upon further investigation, this is not necessarily the case.

Smart, from the start, never had a choice but to be involved in the arts. Between his mother’s singing, his uncle’s tattoo art and artwork, and his musicians’ uncles one could say he was genuinely born with a desire to create. While he experimented with other arts such as drawing and graphic design, photography was the last puzzle piece as an artist.

Upon first glance, it is easy to assume that what inspires him is a lot of EDM and the Blade Runner Collector’s Edition box set, yet that’s just a small fraction. When speaking with Smart you get the sense that he is genuinely inspired by just about everything in the world around him.

“I would be wrong in saying that there was any one or two things that inspire me,” said Smart. “Because I wouldn’t be able to portray my thoughts on my beliefs and my thoughts on the visuals that I like without literally everything that I see and hear and do on a daily basis.” He went on to say that without that motivating factor his art just “wouldn’t exist”, leaving the work without something that it might need visually and creatively. Smart’s dark, edgy style was not something that he set out to find, but rather something that evolved organically as he went along. It’s easy to see it as being a pastiche of cool post-apocalyptic aesthetics, but there is a lot more to his vision than that.

“I try to take a lot of what I see out here, and try to find a way to show people, said Smart. “People are always talking about the future and, ‘Where’s the flying cars?’ ‘Where’s this stuff?’.”  He went on to say that he thinks people don’t take the time to really appreciate the fact that we’re already there as a civilization. “We may not have the flying cars, but we’re already in that future that everyone is looking for…but on the turn of a dime it could go the way of that dystopian future everyone thinks about.”

Nonetheless, the dystopian vibes that his work unceremoniously yields are mostly based off of perspective rather than intention, mainly vibes rather than actual visuals.

“To me, most of my visual have more to do with rebirth and tranquility and being a part of something bigger than yourself,” Smart said when describing his work. “That’s why a lot of times you’ll find when I do the manipulations I have parts that are escaping from themselves. I look at it as more connection to everything around us, than I do dystopian, honestly. But I can definitely see where everyone’s getting that dystopian vibe off of everything.”

It is images like his 17th Street Farmer’s Market piece that achieves this effect the most. Between the low-level view of the structure, juxtaposed against a perfect mirror reflection fixed underneath, it could almost be a still from the TV show, Black Mirror. While feeling post-apocalyptic, it just is just as easy to see Smart’s views on rebirth and tranquility in his wonderfully captured image.

Smart himself and his breathtaking photography is no stranger to the Richmond tradition of First Fridays and will be showing this work this upcoming Friday. With so much going on what is his favorite part of participating?

Most definitely hearing people’s reactions and interacting with his audience.

“I think that’s where I get to [see people’s reactions]. People can comment and like, three, four, five hundred times on a photo, but how many times do you catch yourself scrolling on a whim and not even paying attention to it?,” said Smart. “I need to see the thought process, and what you’re thinking, the wheel’s turning. Even if you don’t buy anything, to me, standing there for ten minutes, talking to whoever you’re with? My job is done.”

With so much going on in his work there is clearly a lot to process and take away. But what is the one thing that he would love for his audience and viewers to take away?

“See the world differently,” said Smart definitively. “I think that’s a simple enough statement to cover it,” before adding that he wants people to see what is happening around them more critically. “Whether you see good, bad or indifferent in whatever I do. If it’s got you seeing things from a different perspective, that’s it for me.”

It’s very easy to hear the words “dystopian” or “futuristic” and think something very specific or even negative; like clinical steel. Even in today’s social and political climate, dystopian has become a tossable buzzword spilling out of everyone’s mouths between discussing how disgusting the current political arena is, and comparing the world to such series as The Handmaid’s Tale and Black Mirror. Smart’s work might just be what we need to remember that we can actually take a detour from the dark into the love and positive after all.

Chris Smart will be showing this week at First Friday on Friday, May 4th from 5:30p to 9p at 9WG Studios located at 9 West Grace St. He will be showing with Opensvrgery for their show, Converge. They will also be having a free raffle with prizes from both of the artists as well as from Alqmey Apparel and The Richmond Experience.

All photos by Chris Smart