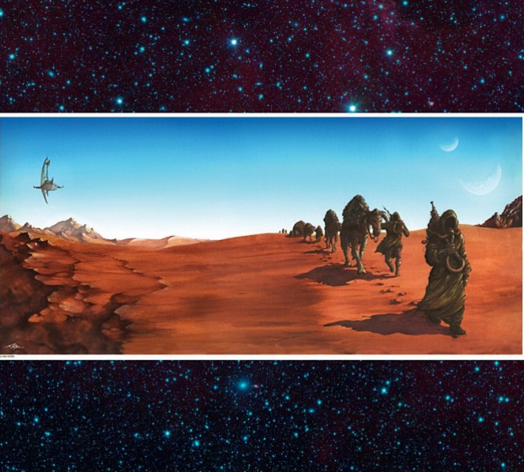 Successful illustrator and painter Arik Roper, who is now based in New York City, was raised here in Richmond in the 1980s.

Successful illustrator and painter Arik Roper, who is now based in New York City, was raised here in Richmond in the 1980s. As a teenager, Roper found himself mesmerized with the psychedelic blacklight posters that hung in Spencer’s Gifts, finding a sort of passion with fantasy illustration and graphics.

That passion has now turned into a career allowing Roper to make quite a name for himself in the realm of illustration and graphic design.

“It’s pretty evident today that I am somehow still affected by the blacklight stages that I had as a kid,” Roper said. “But with sticking to my interests in my adolescent ideas of wizards, and trolls, and fantasy landscapes, I was able to maintain an identity.”

"Snakehandler in Afterlife". Gouache and Ink illustration from around 2012. A rare example of a color piece that was unrelated to any hired work. I don't usually have time to take it to color of it's not part of a gig. I found this one shelved away in the stacks of sketches.

Roper’s identity and style is as distinct as the mentioned blacklight posters from his youth, with his modern work coming off as psychedelic-fueled and fantastical.

The other-worldly images Roper creates garner attention that extends out and beyond his New York studio and his Richmond roots.

Working as an illustrator and creating personal friendships with bands like Sleep, as well as having a client list that includes MTV Animation, Sony/Columbia Records, and VICE Magazine, Roper’s visions are more than just distinct, they’re highly sought after.

“A lot of the work I do is commercial and is published on records, in magazine, or on t-shirts. I’m not so much of an abstract or fine artist, though I have an appreciation for technique and how an artist creates their piece. When people see art that is not entirely digital they appreciate it; like a relic,” Roper said. “Fortunately the market has grown in my favor, despite other parts of my career being really involved in underground or lowbrow.”

Backtracking a bit to the 1990’s, Roper’s early years put him right at the epicenter of the New York graffiti art movement. Roper befriended graffiti writers and artists that pulled him into the scene.

“After I got to New York, I was influenced by an urban style of art that was not exactly mainstream yet. Eventually graffiti was to be seen on the walls of fine art galleries…” Roper said. “And from there came skateboard artists who became visual artists/filmmakers or spawns of Larry Clark (director of 90s cult film KIDS). And I just happened to be in the middle of that scene right before it exploded.”

The urban art scene further allowed Roper’s interests to develop as an illustrator and flourish into a career while he attended the School of Visual Arts in NYC.

“I was then so influenced by urban art, but I was still drawing more or less the same things that I’ve always drawn,” Roper said. “ In general, if you look at the stuff that I drew when I was 13, my skill improved drastically but my content was never a world apart.”

Single page sequential strip from around 2001 I think. It was mainly done as a personal color exercise using liquid watercolor inks. Later licensed for a Dinosaur Jr. skateboard graphic for Alien Workshop. @davesweetapple

With the recent boom in graffiti murals in our area, and art shows that collect young artists, Richmond thrives from its own and other art movements and worlds that have, for a long time, existed.

“I’m happy to see that the Richmond art scene is gaining more interest with VCU and some new blood that is keeping the interest vibrant to a degree. Sometimes Richmond may shoot itself in the foot with city planning and politics, but Richmond has really changed a lot in the past five to seven years,” he said about RVA’s arts community. “There’s a lot more people making really high quality art and making a name from themselves. The media has allowed scenes in Richmond to develop and it doesn’t have to be in New York or L.A to thrive. It’s changed for the best.”

Microcrab. Ink and pencils. 6.5"x7.5". Another for the Tiny Trifecta show at @thecottoncandymachine tonite! All works are $100 and the lineup of artists is nothing short of mind melting. I'll be there, so should you!

Sticking to his guns, Roper has continued to work on his established career. But what also is never too far from his mind is the city where he grew up, with the blacklight poster shops and its own progressive art movement.

He even lent his talents to RVA metal heads Windhand on their new album Griefs Eternal Flower. He met them while the band was on tour with Sleep. Roper had done album work for the legendary doom-rockers Sleep, and when he heard Windhand, and heard they were from Richmond, he was pumped to do the cover for them. “[It] seemed a like a great match,” he said. “The whole project turned out well. I think we’re happy with the way the art and music compliment each other.”

With Roper’s work, take part and fall into the fantasy world that he’s created as he has recently opened an online store that will allow you to buy artwork directly from him.