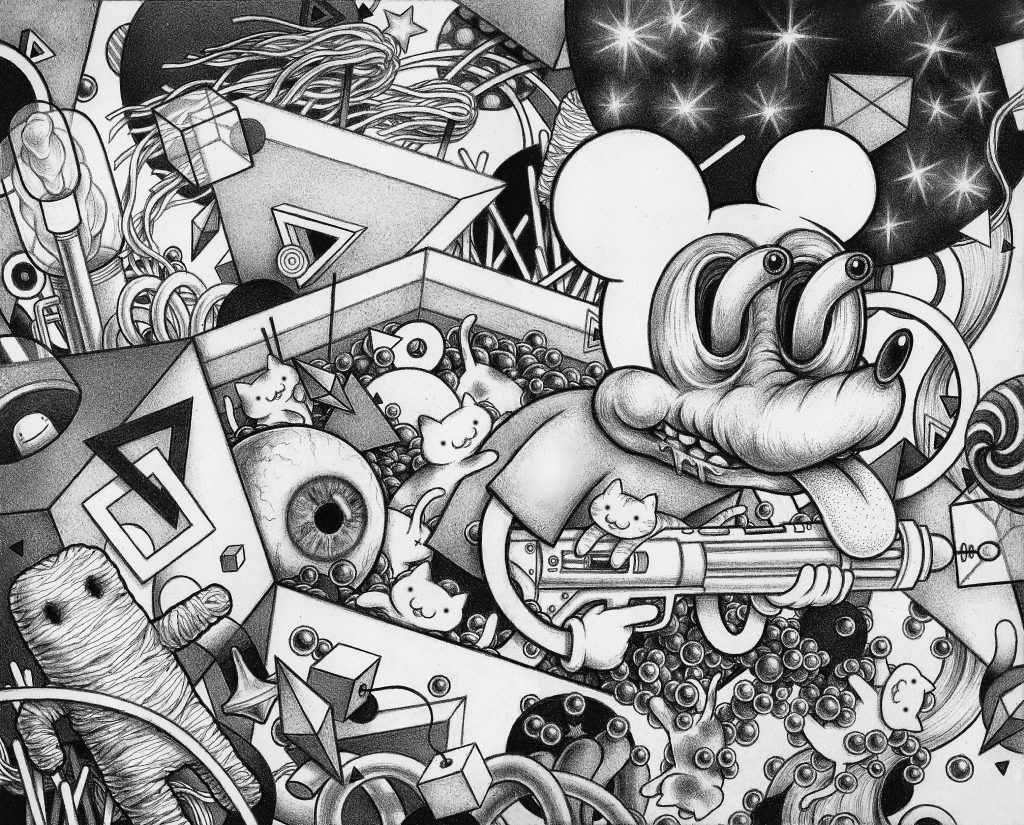 Like Alice down the rabbit hole, it’s easy to get sucked into the fantastical world that Richmond-based painter Wingchow creates in her abstract paintings and illustrations. Her superb use of color and value create a hypnotic sense of dimension, drawing the eye to lines and shapes around the canvas.

Wingchow has been drawing as long as she can remember, but she started working with paint in high school, she said, describing it as part of a life-long interest. “Making art has always been my number one interest, so when it came to college, art school was the only thing that made sense,” she said, telling RVA Mag about her artistic background.

Following graduation from the Virginia Commonwealth University Department of Painting and Printmaking in 2014, Wingchow partnered with Ian Hess and Eli McMullen to form Endeavor RVA art gallery. Wingchow said the collaboration began as a cost-effective studio space she shared with Bonfire, another art collective, until they moved on. Her co-collaborators saw an opportunity. She said, “Ian and Eli jumped to take the spot. They asked if I wanted to stay and be a part of their new collective.” She did. The trio worked together to develop the logo, name, and manifesto. She summed up the partnership by saying, “They’re all great guys and it’s been a lot of fun.”

Consisting of amorphous organic forms rendered with a diverse color palette, Wingchow draws visual inspiration for her paintings from human anatomy, forms found in nature, sweets, and cartooning Thematically, her work draws from the idea of “play”, she said, and communicates transformation and movement. She described her work as “whimsical and visceral” and says she attempts to “keep things fun” in her pieces.

In addition topainting, Wingchow is a master of ballpoint pen illustrations. These illustrations possess the same intricate detail and masterful craftsmanship as her paintings. On a current piece she is working on, she’s dedicated more than a hundred plus hours. Wingchow said that the bulk of this time is spent on creating the delicate gradations using multiple layers of ink. The process and critical thinking in creating her illustrations and paintings exist in two different forms.

“In painting, I do things that I can only do with paint, and the same goes for a ballpoint,” Wingchow said, talking about her use of two mediums. “I’m trying to push both forms of making, but they have very different properties so naturally, they result in different paths of thought and different imagery.”

In her abstract works, Wingchow’s method is often unplanned and dependent on the movement of her hand as paint is laid down. “I’m drawn to colors first, and the forms I make became intuitive somewhere along the way,” she said. She enjoys the freedom of working with no notion of how the final pieces will appear and works without reference. When it comes to pieces in which she has an idea or theme she wishes to pursue, she take a slightly different approach. “In those works, my method could be described as a push and pull process between improvisation and its corresponding calculated response,” she said.

Often times her paintings change in orientation as the composition alters. Creating her paintings is as much of a journey to create as it is for her audience to view.

She was accepted into the annual New Waves show at the Virginia Museum of Contemporary Art, a juried exhibition that draws the best artists in the region to the Virginia Beach institution. Her piece, titled Float, came out of “experimenting with colors and shapes that exist as an object,” Wingchow said about the work. She hopes to pursue more gallery shows as well as expanding her work with murals; the most recent of her murals can be seen at North End Juice Company.

It is easy to be enthralled by her large body of work and the plethora of things she wishes to accomplish in the future. When asked how she maintains her ability to constantly create work, she said, “The starting is the hardest part. Once you start it’s like a rolling snowball.”

To see more of her work, check her Instagram account, @Wing.Chow, and her upcoming solo show opening late August at Artspace Gallery in Manchester.

Vivienne Lee is a graphic designer and arts writer at RVA Magazine. She majored in Communication Arts at VCU and has worked with Richmond Magazine. She enjoys pugs, boba tea, and has an moderately impressive collection of Star Trek memorabilia.