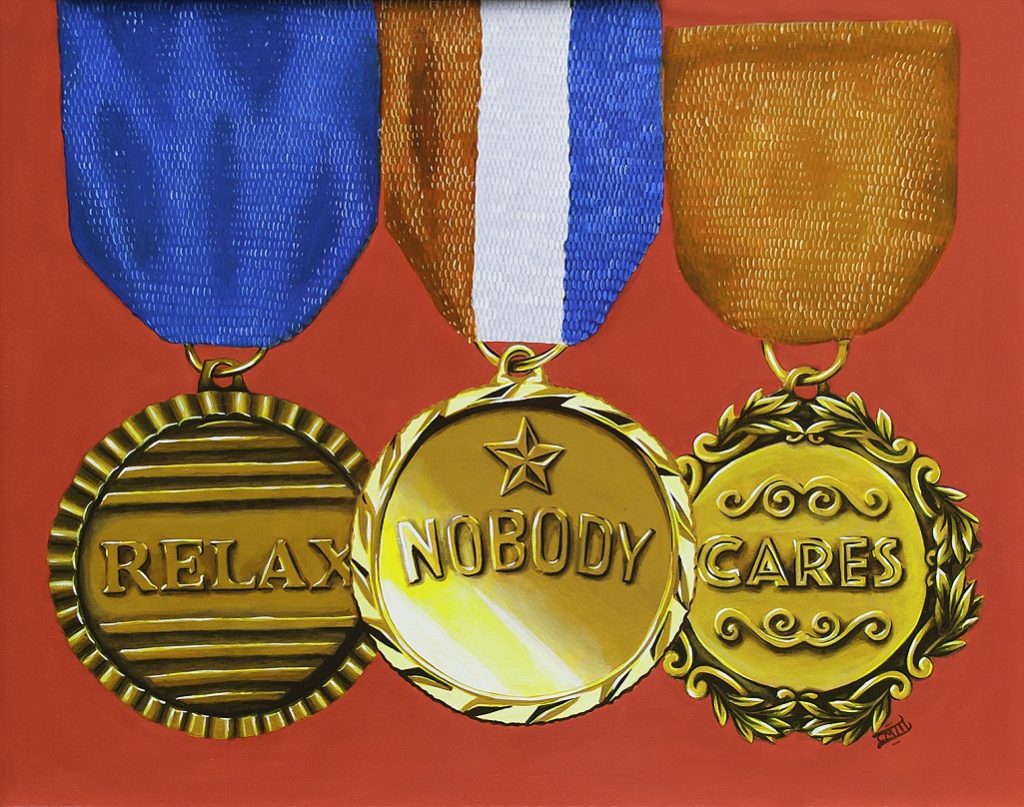 The Norfolk-based artist and VMFA fellow marries pop culture to comedy in his work, leaving the dialogue open to viewers on political and satirical topics.

The Unpopucultural work is made to turn cultural references on their heads. In his 2015 “Get Rich or Die Voting” piece, the painter saw a host of reactions from many breeds of viewers.

“There’s always this taking a side, even with the best political art,” Medley said. “I wanted to make something so ambiguous that it would say something to everybody. The reaction I got was incredible.”

People from all walks of life would look at it, Medley remembered, and nod their heads and laugh. Rather than inciting a narrative, the open-ended piece lets viewers take their own meaning like much of Medley’s work.

“What was really interesting is that later after the presidential election last year, the reactions to it changed drastically,” Medley said. “Now people look at that piece and it’s sort of funny, but almost a dagger-type of funny. It’s pretty sad….but it’s stuff like that I’m interested in doing, where I present this awkward moment to everybody, so let’s address it.”

Medley was recognized with a painting award in this year’s Virginia Museum of Fine Arts Fellowships. Medley was awarded $8,000, along with 12 other professional artists. Four other artists received awards for painting among the total 26 artists honored by the VMFA.

“The VMFA Fellowship was very exciting, admittedly it was kind of a shock,” Medley said. “While you take the approach, you’re doing it for the courage of putting yourself out there, doing your due diligence. When you get selected, it’s a great momentum booster.”

Richmond isn’t the only place where Medley’s work is in the public eye. In Norfolk, he painted a two-story collaboration mural, “Bloom,” in his duo Fang Gang NFK with artist Charles Rasputin.

“It was cool to be representing my own city,” Medley said. “I remember when I got picked…I love where we live, but it was one of the first moments where I felt proud to represent something in my city. To be able to pull something off like that and still stay true to what I like to do was a real accomplishment.”

With a 50-foot mural under his belt, Medley still remembers where he started. His current graphic-design like style kicked off with his “You Tried” balloon painting, and moved into other pieces like “Get Ill Soon” and “Adequate.”

“It’s meant to be the bare bones,” Medley said. “The ribbon that says ‘Adequate’ — there’s this part of society that’s like, do we overemphasize mediocre success and smother our kids with rewards? Or do we not give ourselves enough credit?”

Medley likes the uncertainty. In all his work, the answers are up to the viewer.

“You could look at it and go either way, and I’m not saying one thing or the other,” he said. “Someone said the best part is pencils down, when you’re done working and get to see the reactions to it. People are either confused, or think it’s great, and granted it’s not for everybody.”

While many of his Unpopucultural pieces deviate from each other, the majority have humor in common. A child of the 80’s, the personality in Medley’s work approaches the world through his upbringing.

“Humor was always there,” Medley said. “Really good times, really bad times, whenever there was something awkward or confusing or emotional…you could always break that moment with making somebody laugh, even if it wasn’t the most appropriate thing to do at the time.”

Medley made his way through most of his childhood as an artist, trying out different styles and searching for his own.

“When you’re young it starts out with instinctively doing things,” he said. “When you get older, you want to be part of the art crowd and do stuff that’s deep and meaningful. And after that you start doing what’s popular and what’s cool, but then you realize you don’t have fun doing that.”

He didn’t find his artistic beat for several years, until his brother commissioned him in 2007 to do a portrait. He wanted a painting of his dogs, but with their heads on British Victorian-era boy bodies. That year, Medley realized the work he wanted to do was work he found humor in.

“If nobody buys this I’ll have to hang it in my own house, so I might as well like it,” he said, laughing at himself. “Not everything I do is laugh out loud humor, but there’s always an element of it, whether it’s dark humor or something that’s kind of like…yeesh.”

For aspiring artists, Medley echoed his own lessons.

“Above all else, just do the work that you want to be doing for yourself,” he said. “That’s been my saving grace. And try to learn your fears, understand what they are and leverage what makes you afraid.”

Just in the last two years, Medley confronted his fears of stepping out of his comfort zone by working with other artists on collaborations (which turned out to be some of his favorite work). He’s also stopped fretting over whether people will take him seriously.

“If I like it, there’s got to be at least one other person in the world out of billions of other people who will like it,” he said. “When you put it in perspective, there are way too many people in the world for me to make this and no one like it. If there’s absolutely nobody who likes your work, congratulations, because you’ve accomplished even more. ‘I’m the most hated person in the world! I did it!’”

Moving forward, Medley wants to continue making murals and working outside his hometown. Richmonders can look forward to seeing more of Medley’s work in upcoming festivals and projects around town.

To keep up with Medley in the meantime, find him on Instagram here or visit his website to see his full portfolio.