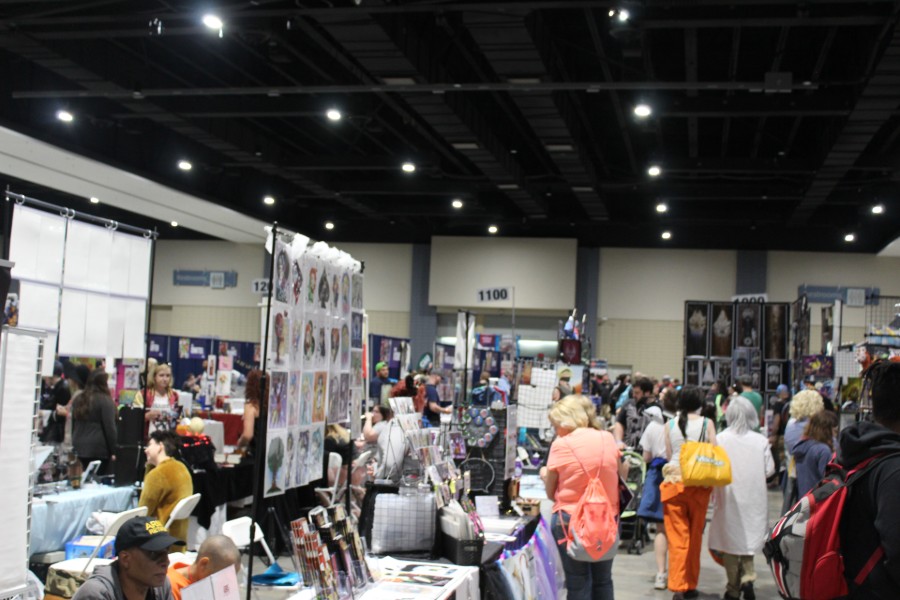 Happy not-yet-rainy Tuesday, comic fans of the greater River City! Welcome on back to issue number twenty-one of your RVA Comics X-Change, where every other week we talk about what is on the radar in comic world and pop culture. This week we take a big stroll down Artist’s Alley – GalaxyCon’s Artist’s Alley that is.

One of my absolute must stops when I go to conventions is always Artist’s Alley. Sure, it’s really cool to walk by vendors, go to panels, or quickly run past your heroes at meet and greet tables and hope that they noticed you. But what really makes it for me is meeting independent artists, writers, and creators of all mediums, who are not only passionate about the same fandoms that you are, but are also excited to share their original works with you and the world.

This week with Comics X-Change we’re going to take a different turn in the road; instead of check out the comics coming out this week, or that are already out and deserving of a second glance, we are going to talk to some of the folks who made GalaxyCon so special. I talked to illustrators, writers, and creators of all kinds who were passionate about everything from general fantasy to anime to sci-fi and everything in between. It is my privilege to introduce you to some of the biggest names of tomorrow.

Andrea Rose Washington has your new favorite novel to get sucked into. Originally from the DC area, the author of Adalithiel and Elendil heard that GalaxyCon was a good one to come to. After she heard that GalaxyCon had not been to the Richmond area in, well, a minute, her interest was piqued.

“I’m a sci-fi writer, [and] my first book took me about five years to get it done completely,” said Washington. “The next one took me about a year to do, so [I’ve been] writing officially for five years.”

Jordan Kincaid is a local illustrator who lives just around the corner here in Richmond. She focuses on whimsical fantasy elements, and knows how to make your childhood favorite stories look like absolute art. When she heard that GalaxyCon was going to be coming to the city, she was happy to support a really good convention that we were in need of.

“I think that [tabling at artist’s alley] helps get our name out there, and with our social media prescence,” said Kincaid. “It’s just a really good learning experience for newer artists as well. It’s a good opportunity to slowly build on what you already have.”

Steve Howard is another DC favorite who made it down south to share his skills with us. Howard is an illustrator and designer who does a lot of comic styled art, among other skills. He was looking for another convention to hit when another artist recommended GalaxyCon. When he isn’t at the table, you won’t catch him doing any window shopping, but he will be found meeting fellow artists and networking.

“Anybody doing anything creative, especially if it’s just you and the people around you, artists, writers, and craftsman, they need to have their ear to the ground,” said Howard. “Most of the time when we do this, we’re in the studio. We rarely get to interact with the public. I think it’s important that every once in a while artists get to meet their public. It’s very important to meet people and find out what they like, or what you could do that they could see. On the other side, especially with comic artists, people may know your style but it’s always an extra added to treat to put a name to your face of these pictures you like.”

Grace is another Richmond local who is probably the ultimate Pokemon fan, at least while the Richmond area is concerned. Not just a collector of merchandise, she ended up with the biggest collectible she could have – one of the only ten Pikachu Volkswagen Beetles ever made. She is still in the process of fixing it up, but got it up and running enough to take it to its very first convention. This is her first big convention, and one of the best parts was surely talking to people about the history of the car and answering questions.

“It’s a piece of Pokemon history,” said Grace. “Even though it isn’t perfect, I wanted to show it off, and people seem to be really enjoying it.”

Mackenzie Lemoine is an illustrator and artist based out of Raleigh who specializes in the cute, pink, and spooky. Prints featuring subjects such as Mothman, ghost Pokemon (including a tattooed, punk rock Jigglypuff, naturally), and Tim Burton-styled Totoro decorate her table, proclaiming her really cool aesthetic. Much like the other artists here, she is excited to be in Artist’s Alley, and for all that it brings to the art community.

“It’s really good to meet the people who want to see your art and are interested,” said Lemoine. “It’s good for artists to have that face to face interaction with people who enjoy their art. For me, whenever I started illustrating, illustration is my safe place to go. When people come up to me and go ‘It’s so much pink! That’s so cool!’ It’s so good for me and my mental health.”

Bridgett McPherson, aka Celestial Fawn Designs, is another illustrator out of North Carolina who came up to the convention to see what GalaxyCon was all about. Her designs focus a lot on color and pop culture, and have their own way to make some of your pop culture favorites like Kiki’s Delivery Service your new treasured piece of art. She is a big fan of seeing the costumes as they go by, and as an artist who does a lot of pop culture based work, she truly enjoys seeing the things she draws in real life.

“I think nostalgia is what grabs me the most, because you can do crossovers with your art and make stuff with everybody,” said Bridgett. “It’s cool to see dads go, ‘Hey look, there’s that thing from when I was a kid!’ It’s easy to talk to the parents who intimidate you, but are bringing up our future so that when we get old they’ll be into the good stuff.”

There were so many more artists and creators that we talked to that we could not fit in here, but we’ll see some of them in the future for more issues of Comics X-Change, sharing their picks of the comics out there right now.

Until then, a word of advice: if you’re tired of the same old stories of Superman vs Deadpool, please take a break from the vendors and panels and just take a good stroll down Artist Alley. Not only will you shake up your own aesthetic, but you will leave with so much knowledge you wouldn’t have otherwise gotten.

Until next time, comic fans!