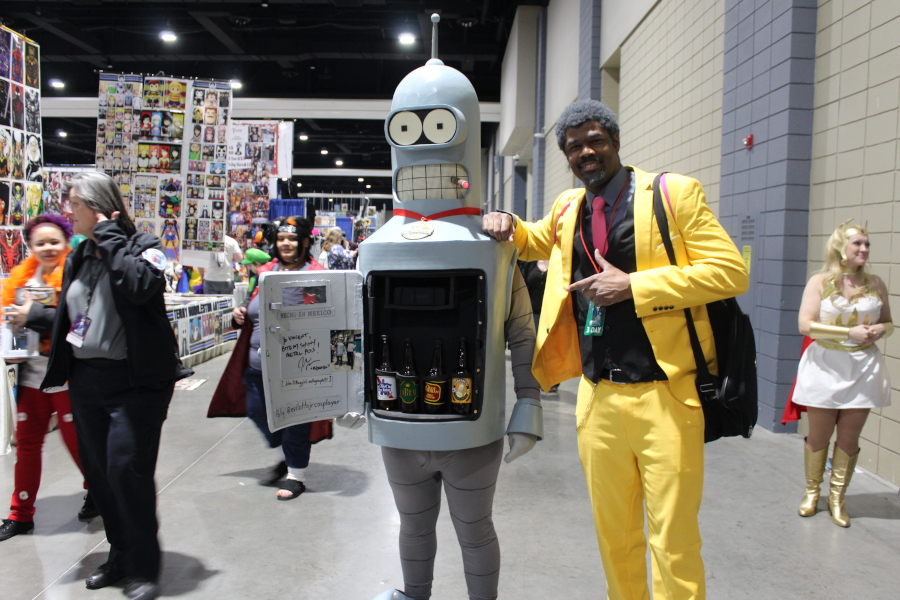 Happy Tuesday, comics fans! Welcome back to your favorite bi-weekly go-to for comics news and talk in Richmond. Not only that, we are your best go-to for in-depth coverage of the biggest annual comics and pop culture event in the River City – GalaxyCon Richmond.

Conventions are beautiful events for many reasons; they bring people of all walks of life and interests together under the same roof, and also allow said people to experience the media that brings them joy in a new way. From artist alley, to vendors, to question and answer panels, to even shaking your favorite actor’s hand, conventions are full of magical events for so many people.

Naturally, this year’s GalaxyCon Richmond was no different. If last year’s line-up of celebrities and creators was excellent, then this year’s topped it as a solidified supreme. The unofficial theme of the year must have been “reunion,” as many franchise’s actors and creators joined forces once again, some having not each other in years.

From the central cast of The WB/CW’s Smallville to Disney’s Aladdin and even nerd king Kevin Smith’s View Askewniverse, many different casts were reunited on the floors of GalaxyCon. It was a mighty good time to be a fan of, well, almost anything.

Linda Larkin is best known to many children of the 90s as the speaking voice of Princess Jasmine in Disney’s Aladdin (1992). If her fans thought that they were the ones most excited to meet her and the cast, they have some competition. While she travels the convention circuit a few times a year, no one was more excited to be at this convention, and see the Aladdin cast reunion, than the princess of Agrabah herself.

“It’s really nice for [the cast to be back together],” said Larkin. “It’s just really nice to be able to meet people that love the movie, and all of us [to] be together when that happens. It’s really nice. ”

The best part for Larkin was certainly meeting the fans. Voice actors usually don’t record many parts of their script, if any at all, with other actors, so getting to see and meet other people who share the passion for her projects is her favorite. If you grew up with this film and let her know, she was just as excited to talk to you as well.

“It’s very moving to me,” said Larkin. “It’s very touching when I see another person across from me, and they’re telling me, and I can see in their eyes that this movie imprinted on them in a way that is lasting. I just feel really lucky to be a part of that for them.”

The event Larkin was most excited for was without a doubt the question and answer panel with the remaining members of the cast – Steve Weinger (Aladdin himself), Gilbert Gottfried (Iago), Jonathan Freeman (Jafar), and Frank Welker (Abu and the Cave of Wonders). Rarely are they ever together, and even then it is usually in smaller groups. It has been a long time since all of the remaining cast has been in the same room together.

The event was held on one of the main stages of the Greater Richmond Convention Center, which meant that the panel was held in a very large, almost stadium-sized room. The projection screens on either side of the stage were gratefully appreciated. Families, small children, and adults in their twenties and thirties filled the packed room, with barely a seat left to spare. With five minutes until the panel was set to begin, the long line to ask questions was already filling.

The cast answered a variety of questions, ranging from favorite recording memories to casting memories, and even their favorite lines from their individual characters. Two subjects, however, were the most popular in rotation – the shock of the film’s immediate and long-lasting popularity, and working with the Genie himself, Robin Williams.

Most of the cast remembered Williams just the way we as fans assumed he was – kind, supportive, and hard-working. Weinger recalled Williams improvising parts of a scene with him, where Weinger’s Aladdin (in disguise as Prince Ali) is still trying to woo Princess Jasmine, while Williams’ Genie (in disguise as a bumblebee) advises him to just “beeeeee yourself.”

Of all the memories, the one that got many of the adults who are familiar with Gottfried’s long stand-up comedy career was when he recalled sharing the stage with Williams at a comedy show. When Gottfried was kicked further down on the lineup, Williams fought for him by insisting that he himself go early instead of Gottfried, because he had “friends who were here to see Gilbert.”

As per usual at conventions, there were many cosplayers walking the exhibition halls. From Sailor Moon to Rey and Supreme Leader Kylo Ren from the Star Wars series, there was something for everyone. Among the booths and events were even tables and events specifically for the cosplay bunch.

A few tables were set up for cosplayers to quickly mend their costumes, or fix hair and makeup. Many cars were in attendance for fans to pose with, such as K.I.T.T. from Knight Rider, the Metallicar from Supernatural, and the Ecto-1 from Ghostbusters; plus, for the anime fans, Grace Klich’s Pikabug was hanging out as well.

Not only were there multiple costume contests, costumed pro wrestlers had a strong presence in the back of the exhibition hall as well. Who will win in a battle of Link versus StarLord? Only the headlock will tell.

Pulling a strong audience amongst the question and answer panels was the reunion of some of the View Askewniverse’s favorites. Kevin Smith’s beloved franchise saw a new addition last year with the Jay and Silent Bob Reboot, starring Smith and Jason Mewes. As Smith recently finished up the Jay and Silent Bob Reboot Roadshow tour to promote the film, some of the cast, including Mewes, came back to Richmond to say hello.

Friday night’s View Askew Reunion Q&A panel was attended by Brian O’Halloran (Dante Hicks, amongst others), Shannon Elizabeth (Justice), and Mewes (Jay). Like the Aladdin cast, much of the cast of the films had not seen each other in person in a while. That was not true, however, of O’Halloran and Mewes. O’Halloran joked that he “sees this motherfucker all the time.”

O’Halloran and Mewes answered the majority of the questions, which ranged from favorite memories of the series (mostly centering on Jay and Silent Bob Strike Back, the only film aside from Jay and Silent Bob Reboot in which all three of them appeared), to filming, and of course what it is like to work with Smith himself. O’Halloran fondly recalled that filming the View Askew films is much like “what [he] imagined summer camp is like.”

Of course, the biggest questions centered around Clerks 3. There are always some theories or mystery around Clerks 3 and whether or not it will happen; quite frankly, there have been for many years. Allegedly there was a script previously written for it, but a test audience found it to be entirely too dark, so it was scrapped.

However, O’Halloran confirmed during the panel that the film is a go, and the usual cast of characters are just waiting on Smith to finally finish the script.

That does it for this week, comics fans! We hope you enjoyed part one of our coverage of GalaxyCon. Stay tuned for more, as we dig deep into Artist Alley, talk with some of your favorite comic creators, and present a very special interview with the men of Clerks themselves, Brian O’Halloran (Dante Hicks) and Jeff Anderson (Randal Graves), as they talk to us about the convention and the future of the series.

All Photos by Ash Griffith