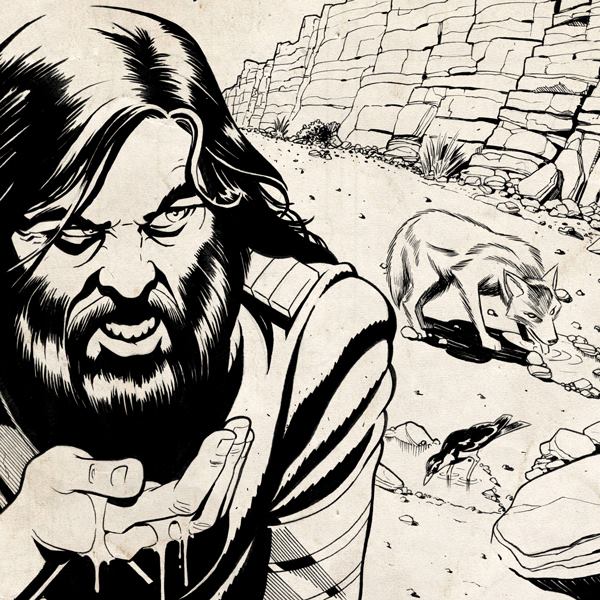 As our worldview continuously grows darker with every news broadcast, our thirst for dystopian media grows thicker. Luckily for us, local author Ian Bodkin’s has just released the third installment of his comic, The Savage Lyrics, to satiate this need.

Equal parts 1984, Under the Dome, and that one season of The Walking Dead with the Governor and his weird town thing, The Savage Lyrics #3 weaves together a post-apocalyptic story that Stephen King himself would be proud of. Set 100 years after a bomb is released, survivors come together to form a community called “The Town”. Forced to live under the totalitarian rule of a group called “The Ministry”, the series follows these events and of the titular character, “The Savage” and the quest to find out who he actually is.

With the murder of an entire family and a new sheriff, the people of the Town are paralyzed by fear as they suffer under the rule at the hands of The Ministry. This third installment comes in with well-known thief and often drunk, Sal Qureshi, cast out of the town by the Clerics, into the dead lands where he meets his new mysterious companion, The Savage. The two head west where the sun falls, the light dies, and the Town sits on the brink of its own destruction.

“The first two issues starts with a lot of mystery. Who is The Savage? What is his purpose?” Bodkin said. “In this one, it starts to become clear why he threatens the status quo of this post-apocalyptic society. But also he is arguing for something more important than survival. The need for art, the need for just living more than just living day to day, the need for experiencing life.”

Bodkin said that while his inspiration stems from a variety of places, he has always been a big fan of comic books and science fiction.

“I’ve always liked apocalyptic, post-apocalyptic writing,” Bodkin said. “Most of my work takes a lot of inspiration, too from The Gunslinger [by Stephen King]. I guess in some ways that whole idea of the whole way of how the story can continue over and over again and be told in different ways.”

Needless to say, the city of Richmond itself played an important part in inspiring parts of the series, as well. Despite the fact that the series, which is published through Sink/Swim Press, takes place in the southwest, Bodkin could have easily stuck in a random landmark or even a cameo from our beloved Wonton. But the writer found it more important to relay the work ethic and morals of the city and its people.

“It was always fascinating to me just sort of the do-it-yourself mentality of Richmond,” said Bodkin. “It doesn’t matter if we don’t have the big publishing houses or these sort of giant platforms, people just want to create for the sake of creating which I think is a really cool thing. But also the way the city celebrates artists and writers and really comes together for a lot of different things.”

It isn’t news that various media such as The Handmaid’s Tale, The Walking Dead, and other dystopian science fiction franchises have had a stark rise in popularity in the last couple years. Whenever society is shrouded in great times of discord humans just want a simple reminder that it will end peacefully, that we will genuinely survive and be okay.

Bodkin believes that The Savage Lyrics is not any different in that regard, despite the fact that we were in significantly more positive times when he started writing the series a few years ago.

“We always know that humanity has the capacity to lose control,” Bodkin said. “I think we want to know that even if we lose control beyond belief there is still hope out there. There is the fear of ‘Will we be able to handle this?’ and I think that is the question that is central to The Savage Lyrics. What is the essential thing to carry on?”

The Savage Lyrics Issue 3 marks the halfway point of the six-issue schedule. With such a complex, interesting series full of twists and turns, it can only be imagined how fun it has been to craft the road that has led fans of the series to this point. Bodkin’s favorite part of working on the series has been just watching the comic unfold and working with both William Bennett (illustrator for issues 1 and 2) and new local illustrator, Christian D. Leaf, for this issue.

Leaf isn’t the only new addition to this series. Scott’s Addition brewery Three Notch’d RVA Collab House got involved for the release of the third comic to craft a beer around it. Last week, Bodkin and Sink/Swim Press collaborated with the brewery to create “Humanity’s End”, a crisp saison brewed with serrano and habanero peppers, and wow does the aftertaste really bite you hard in the ass. I am no craft brewing newbie, and I can chuck them back with the best of them like the classy broad I am, but with this brew’s spicy kick and intensity, I had to take it a little bit easier. I think it’s secretly called Humanity’s End because if you do just chuck it back you are going to feel like you are dying as you got punched in the throat. That being said, it is easily the best beer I have had in a long, long time. Just make sure you gently sip this one and really take your time so you don’t end up crying at the bar and making your bartender uncomfortable.

While creating the beer, Bodkin was hands-on with Three Notch’d to create something the series’ fans would definitely love.

“Getting to go in and make the beer there with Stefan [McFayden, Head Brewer] was really awesome,” Bodkin said. “He explained all of the parts of the process. We basically spent a whole day just brewing the beer together which was a lot of fun. I’m really excited for people to come out and try it.”

Even though the series is set far away from our beloved east coast city, it really is all about the people of the city that really make it happen. From the conceptualizing of the series itself to a collab with a local favorite brewery, the franchise gets it right in that Richmonders will always come out to help and support when and where they can. Even if we do somehow make it to some kind of World War III shenanigans, it’s safe to say that the River City will always find a way to thrive by sticking together.

The Savage Lyrics Issue 3 is available now and can be purchased on at Sink/Swim Press or at Velocity Comics.