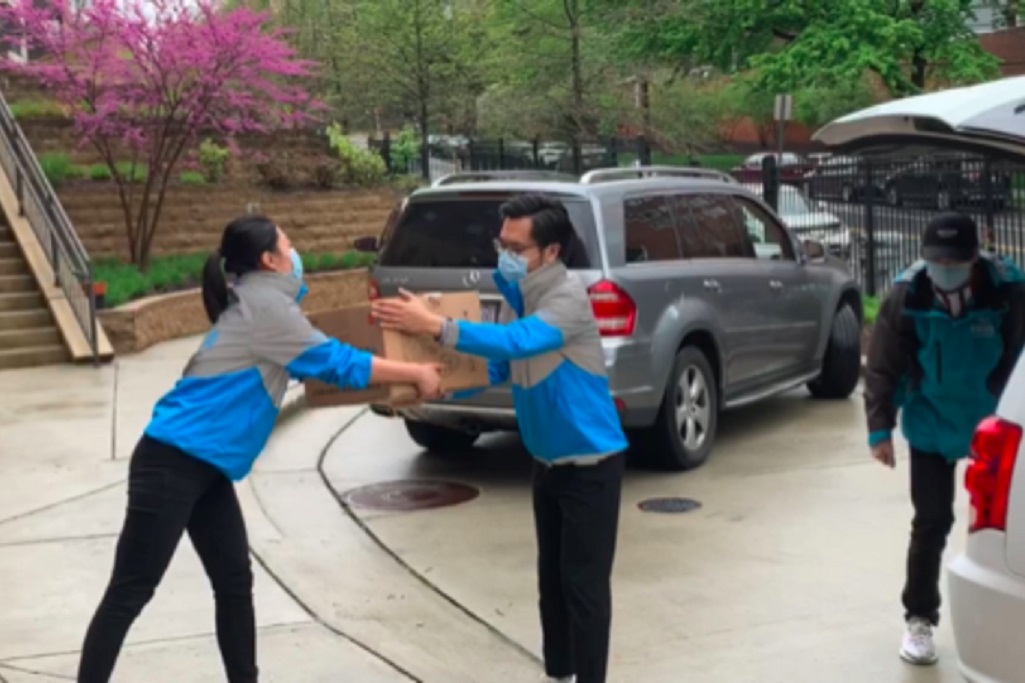 Hungry Panda, a food delivery serviced focused on Chinese food, has been working with the Chinese embassy in Washington, DC to distribute COVID-19 prevention supplies to Chinese students in the US.

Every few weeks, a small caravan of minivans pulls up in front of a building in Northwest Washington owned by the Chinese Embassy and begins loading boxes of supplies that recently arrived from China.

The vehicles belong to Hungry Panda, a restaurant delivery service. But instead of food, the cargo includes face masks, hand sanitizer, traditional Chinese medicine, and other supplies.

Hungry Panda was founded four years ago with a mission to deliver authentic Chinese food to Asian students studying in Europe and the U.S. After many states across the United States implemented stay-at-home orders in response to the coronavirus crisis, Hungry Panda has taken on the added role of helping the Chinese Embassy distribute to the students packages that contain protective equipment and health supplies.

Delivering popular food entrees such as Szechuan spicy dishes and Chinese barbecue remain the company’s main source of revenue, while deliveries of the health kits on college campuses is provided free of charge. The supplies are sourced by the Chinese Embassy, flown in from across Asia and kept in the facility in Cleveland Park.

Each day, Hungry Panda delivers more than 350 packages to universities in Washington, Maryland, New York, Massachusetts, and other campuses on the East Coast.

The Chinese Embassy came up with the idea of assisting its student nationals in early April, after hearing that some students were having trouble finding the supplies they needed.

“COVID-19 related supplies are hard to come by these times and shipments from outside the U.S. sometimes won’t work. Even for some students who had stocked up on health supplies, their portions (were) running out,” said Jinyun Zhang, a sophomore at The George Washington University and also president of the university’s Chinese Students and Scholars Association.

At GWU alone, over 1,000 students from China applied to receive the health kits. But it wasn’t clear how the packages would be distributed.

Zhang said the Chinese Students Union, which was in charge of signing up students to receive the kits, initially planned to have students pick up their health kits. But some were concerned about the risks of spreading the disease using a pick-up method that required large numbers of students to gather in the same place.

After hearing about the Chinese Embassy’s mission, Hungry Panda contacted the embassy and volunteered to take charge of the delivery on much of the East Coast.

“We volunteered to make rounds,” said Brian Sun, manager of Hungry Panda’s East Coast operation. “We have an AI-powered dispatch system that automatically calculates the most efficient routes for each day based on where students are located.”

While the deliveries are made to individual students utilizing Hungry Panda’s drivers and technology, students can receive the free embassy supplies without ordering anything else. By the time the first batch of supplies from China runs out, the platform will have made over 3,000 deliveries.

Zhang said students appreciate the service because it not only helps reduce the risk of the virus spreading, but also confers relief to students at a time when most are still struggling to adapt to the realities of being locked down.

As the number of Americans laid off from jobs has climbed to historic levels across the United States, Hungry Panda has had a surge in hiring of both drivers and office workers in response to the increase in the number of people staying at home and ordering meals. The company currently has around 500 drivers on the East Coast.

“Until now, both our total revenue during the outbreak, and the total number of drivers, have gone up by over 50 percent compared to the same period last year,” Sun said. “I really appreciate drivers who are doing their best on the frontline.”

“I don’t want them to run into any issue so we make sure to give plenty of protective supplies,” he added.

All of Hungry Panda’s drivers are self-employed Chinese expatriates or locals who have signed contracts with the company so that they can keep their routines and make deliveries when they feel like doing so. The company is also able to track the availability and location of each driver in the system.

Sun said Hungry Panda’s dispatch system allows each driver to see locations where deliveries are in the highest demand, so that people can decide for themselves if they want to stay at home or earn some extra money.

Many contractors were also outfitted with outdoor jackets with the company’s logo, which helps boost exposure for the platform and gain more compensation from each delivery.

“It’s similar to what Uber is doing with its advertising campaign, by having drivers put up a tablet in their cars filled with ads and announcements,” Sun said.

The company estimates that because its drivers are spread across numerous locations, it has the ability to reach 70 to 90 percent of the ethnic Chinese population in the major metro areas of the East Coast.

In a short period of time, the company has become especially popular with customers by focusing on restaurants that sell authentic Chinese cuisine.

“We regularly filter out Americanized Chinese food,” Sun said. “Our taste is more geared toward authentic Chinese food because we offer a diverse range of recipes and know the tastes of the overseas diaspora better.”

The U.S. food delivery industry is extremely competitive and Hungry Panda is not the only company offering free services as a way to endear itself to customers.

After suspensions of most restaurants’ dine-in services during the COVID-19 pandemic, business giants like Uber Eats and Grubhub are paying for short-distance deliveries out of their own pockets in a bid not only to help keep small restaurants running but also to increase customers’ dependence on their delivery platforms.

According to Crunchbase, a digital platform that provides information on private and public businesses, Hungry Panda was founded in 2016 by Kelu Liu, a Chinese overseas student at Britain’s Nottingham University.

By 2020 it had expanded to more than 30 major cities across Europe, North America, and Australia. The slogan of the company, “satisfying your Chinese stomach,” indicates it is catering to a niche Asian audience instead of those simply looking for food online.

The company’s East Coast office, which opened in early 2019, is based in Manhattan. It has two other offices in Chicago and Los Angeles.

The expansion of Hungry Panda didn’t happen overnight. The company’s first foothold was in the United Kingdom. When Hungry Panda expanded to the United States in late 2018, many American businesses owners were not familiar with its platform. The company hired marketing teams to explain the platform’s niche focus, its underlying technologies, and the increased amount of exposure business could gain from the partnership.

One of the most important parts of the marketing effort was geared toward Chinese students. Aside from attracting orders from student unions before large events like traditional Chinese festival galas, individual students were also part of the target market.

“Because we have been international students before, we know what other students need,” Sun said. “Many students having their midterms or final exams coming up don’t have time to cook, so we would partner up with businesses and offer ten discounted meals to each person.”

Although companies like Hungry Panda are faring relatively well during the lockdown, many other businesses – particularly restaurants – are struggling to stay alive. Minority ethnic businesses have been particularly hit hard.

To assist some of those businesses, Hungry Panda has offered its legal and business development staffers to assist small businesses seeking loans in the federal government’s Paycheck Protection Program, which is administered by the Small Business Administration.

Sun said many owners of these businesses don’t have sufficient English language skills to complete the applications on their own.

“We proactively reach out to businesses and talk to them about whether they need any support because we hope other businesses can get through the crisis with us,” he said. “If every business ceases operation, we’ll soon run out of stuff to deliver.”

For Hungry Panda, it’s possible that the backing of international capital may push its platform out of the Asian-diaspora-centered comfort zone and in front of influence circles of mainstream delivery services.

“In the future, we’ll have a separate team for the local market but for now, we’re focused on polishing our current market, the ethnic Chinese,” Sun said.

Ram Pantry Makes Sure There’s Still Food on the Table

A greater number of VCU students than you think struggle with food insecurity. Fortunately, Ram Pantry is there to help alleviate food... READ MORE

Les Crepes in Carytown claims to be the only true creperie in Richmond; after all, that’s their specialty. The “fake fine dining”... READ MORE

Ram Pantry Makes Sure There’s Still Food on the Table

A greater number of VCU students than you think struggle with food insecurity. Fortunately, Ram Pantry is there to help alleviate food... READ MORE

Les Crepes in Carytown claims to be the only true creperie in Richmond; after all, that’s their specialty. The “fake fine dining”... READ MORE