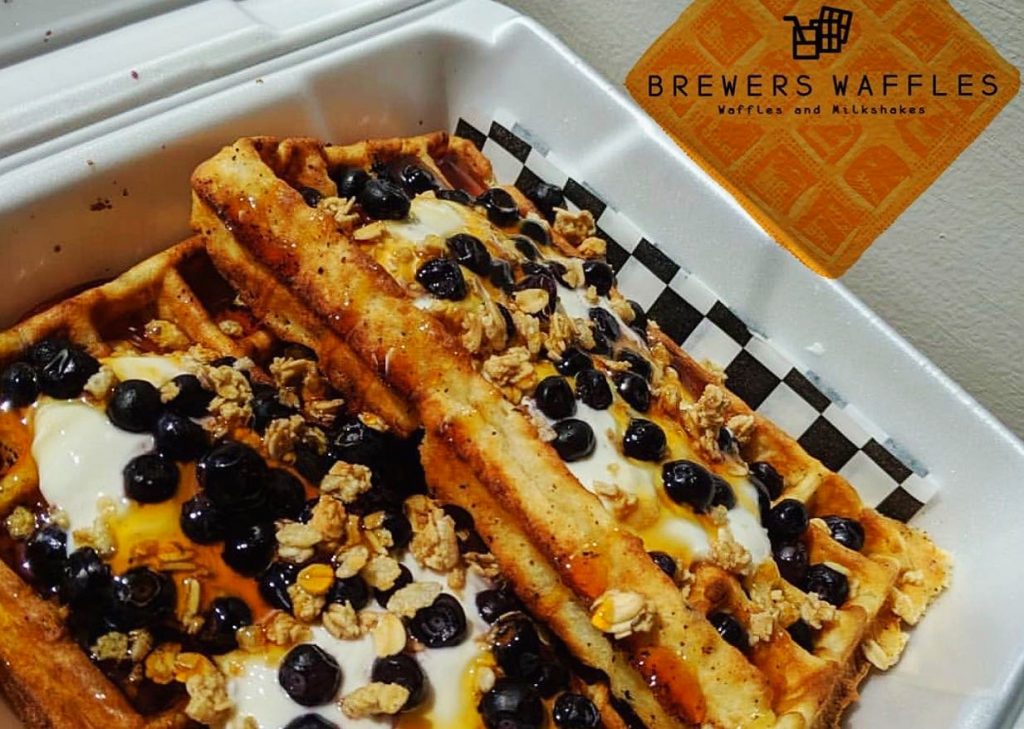 The folks behind Brewer’s cafe are serving up something sweet in their hometown Richmond neighborhood.

The sweeter things in life belong together, and sometimes that means having your breakfast with your dessert.

Brewer’s Waffles, the latest addition to Manchester, is serving up homemade waffles and milkshakes from the people who brought you Brewer’s Cafe. Ajay Brewer teamed up with a high school friend, James Harris, and chef Josh Reed to bring this black-owned business to life. A native to the neighborhood, Brewer and the team knew Manchester — or as they know it, Blackwell — was the perfect place to open the restaurant this summer.

“We wanted to cater to the area where we’re from, and what we know,” Harris said.

Within the community of Blackwell, and throughout Richmond, the team behind Brewer’s Waffles wants to uplift the black community in all that they do. They do this by connecting with the local community in many different ways. For example, attached to Brewer’s Waffles is The Well, an art gallery featuring pieces that highlight black artists in the Richmond area. Currently, the art along the walls was created by Justice Dwight.

“Manchester was Blackwell when we grew up, so we wanted to bring back what was already instilled in the community and keep it as traditional spots,” Harris said. “So that’s why this is The Well.”

“The name of the art gallery is The Well, and that’s the name of the neighborhood — Blackwell,” Brewer added. “The experience over here is just as important as over there. A lot of people aren’t aware that there’s something like this in their neighborhood, so getting the point across — that we stand out like a sore thumb, that we are creative, with the art gallery delivering both great art and waffles — that needs to be highlighted.”

The genius behind the menu, Chef Reed, met Brewer four years ago. Brewer knew back then that if he ever created a business like this, the well-respected Reed, who had worked in the kitchen at Max’s On Broad and helped manage Lunch and Supper, had to be a part of it.

“He really came up with an unbelievable menu for us,” Brewer said.

At Brewer’s Waffles, the names of the menu items pay tribute to various Richmond public schools.

“We grew up going to the schools here,” Brewer said. “We originally thought about doing streets over here, but after researching some of those people, I just wasn’t comfortable, so we thought about school names.”

Brewer’s girlfriend went to work researching Richmond Public Schools, and came up with six people whose names currently grace schools in Richmond. They weren’t all black, all white, all rich, or all poor, but they were all good people that had made the school system better. Wanting to pay homage to them, Brewer named menu items after the various schools.

“The common theme you’ll hear from all of us is that it’s not just about us; it’s the folks that are around us, helping build this business,” Brewer said. “The realization of business is that you can do cool shit all the time, and people love to see cool stuff. Anytime you can come across as authentic is always great.”

“My hat goes off to these two for making me think outside of myself,” Reed said.

With their breakfast-dessert infusions, the owners call Brewer’s Waffles the “treat shop.” Despite his longtime love for waffles, Reed had always worked on the more savory side of things. Creating for the new menu was a bit of a challenge, but he soon warmed to it.

“It all made sense once I realized that it had to be more geared towards desserts,” Reed said. “You know, breakfast desserts — so I went back to childhood, and all the little things that I liked.”

The strawberry streusel waffle, “The Holton,” was inspired by his childhood love for strawberry shortcake ice cream; the banana and Nutella waffle, “The Carver,” is almost like a peanut butter and banana sandwich. “The Blackwell” is more like a parfait, built upon layers of yogurt, then fruit and granola. Brewer’s Waffles also has savory options, like “The Overby,” a bacon egg and cheese waffle, and “The Henderson,” a biscuits and gravy waffle.

Compared with competitors like Capitol Waffle Shop, Reed’s homemade waffles stand out in part due to his detail-oriented approach. Rather than the traditional pre-made “just add water” powdered batter mix, Reed uses pearled sugar and egg whites to get a lighter, fluffier texture to his waffles.

“It takes a little longer to make our waffles, but it’s the way they’re supposed to be made, and it shows,” Reed said. “It’s just what I wanted. Everyone does the traditional round Belgian waffles in the city, so why not change it up and make it my own?”

Reed prides himself on what he calls the “Black Waffle,” which he considers distinct from the Belgian origins of the dish.

“You can change a recipe by simply changing a teaspoon of something,” Reed said. “Once I started tweaking things into something of my own, it’s no longer the Belgians’. We can create anything we want; I’m not giving credit to other people.”

So why did the owners choose to pair their waffles with milkshakes? The answer is simple: because of Brewer’s son, Parker.

“He likes milkshakes, and I wouldn’t make anything he doesn’t like,” Brewer said.

Parker is four years old, and already he’s the owner of multiple businesses… candy stands, in particular. Brewer and Parker work as a father-son duo. In fact, earlier this summer, the duo even biked 53 miles, from Jamestown to Blackwell, as a fundraiser for the Blackwell Parent-Teacher Association (PTA). Their journey raised close to four thousand dollars for the program.

“Every time I have an opportunity to do something, I make sure he does, too,” Brewer said.

On the horizon for Brewer’s Waffles could be a bar featuring alcohol-infused milkshakes. A food truck is also in the works. Catering services are coming soon, too — instead of ordering a dozen donuts for the office, you’ll be able to order mini-waffles.

Above all, Brewer wants this to be a place people are excited to visit, and it shows in his careful choices. Scoop RVA provides the ice cream for the milkshakes, with chocolate, vanilla, strawberry, and even vegan options available. For the waffles, options include the traditional waffle batter base, a cornbread waffle, waffle cones, and a gluten-free vegan option to top off the list. Our recommendation: “The Holton” strawberry streusel waffle and the chocolate Snickers milkshake are to die for. They are both absolutely delicious!

Surrounded by eight other black-owned businesses on their block alone, Brewer’s Waffles, located at 1311 Hull St, are excited to be an active part of the neighborhood they grew up in — and to bring a little something sweet to their hometown.

Brea is a senior at VCU studying broadcast journalism. She is an avid sports lover. Brea has recently tapped into her "foodie" side while covering local food events. When time permits, she enjoys traveling, cooking, and spending time with family and friends.