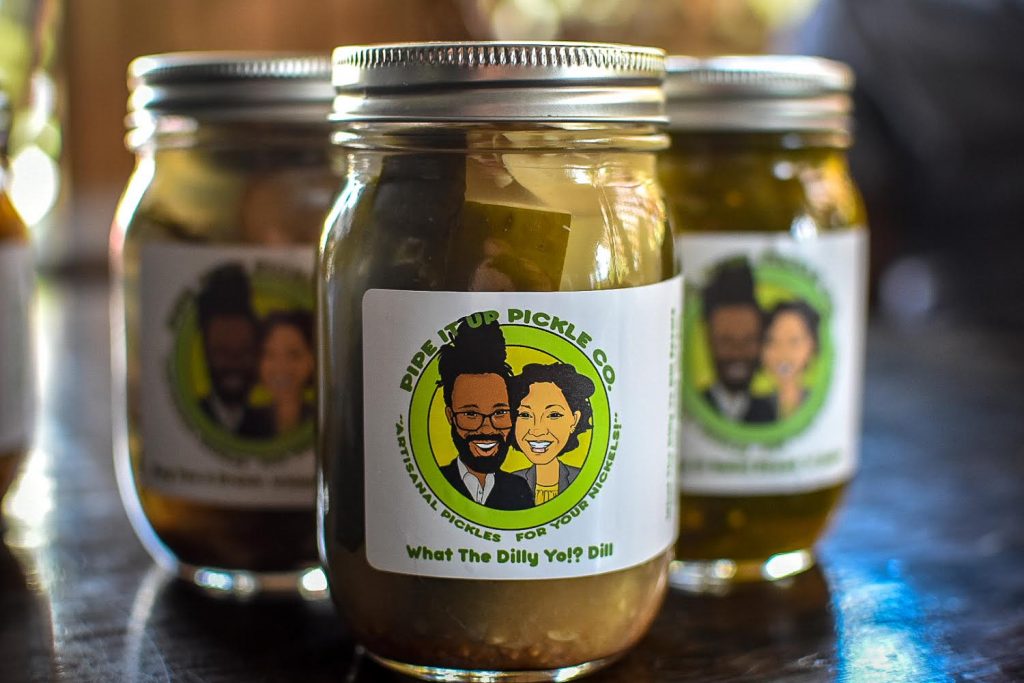 She owns and manages Taboo, the largest sex shop in Richmond; he plays three gigs a week. Yet, couple Alison Miller and Amir Al-Qaddafi still find time to manage their pickling business, Pipe It Up Pickle Co. The two started making pickles in 2017 as a way of spending more time together and got the idea after visiting a restaurant that served house-made pickles.

“Amir was like, ‘how do you house-make a pickle?’” Miller said. “Because he momentarily forgot that pickles don’t grow on trees, and I reminded him how pickles are made: cans.”

Their name, Pipe It Up Pickle Co., was inspired by the popular Migos song “Pipe it up.” Joining the ranks of fellow picklers in town like Matt’s Dirty Pickles, Dayum This is My Jam, and the sadly-defunct Sweet Sour Salty and Co., Pipe It Up Pickle Co. sets themselves apart through their hip-hop theme. Each type of pickle is named after a popular hip-hop song.

Their stacked, juicy lineup includes the “Make It Rain” bread & butter pickles, named after the 2006 hit by rappers Fat Joe and Lil Wayne, along with “What the Dilly Yo Dill,” “Drop It Like It’s Hot” Sirarcha Jalapeno, and “Buy You A Drank” whiskey pickles.

The business started out with their bread and butter pickles after video of them tasting their pickles caught the eyes of their Facebook followers, and their pickling hobby swiftly turned into a profitable concept out of pure demand.

“After we made them, we posted a Facebook live video of us trying it for the first time,” she said. “We didn’t know what we were doing, but people started commenting. Surprisingly, friends started asking for them, so we decided to make more and all of a sudden here we are.”

Miller said they weren’t necessarily passionate about pickles to want to start a business, but rather started it due to boredom and the sheer amount of pickle lovers in the area. She didn’t know how many pickle fanatics existed. She said it was like the pickling business called them.

The couple is rather competitive with one another when it comes to the flavors and the naming of their pickles. Al-Qaddafi is in charge of coming up with the names and handles all the legal matters, but Miller, came up with the original bread and butter flavor.

She said they make time for their pickles because it’s a fun way for them to spend time together in the evenings, and offers a break and an escape from their day jobs.

“We just make time because it’s a fun thing to do and not really a stressor,” Miller said. “It’s kind of different from managing the shops.”

The couple sells their  $7 pickles at Mongrel and online. They usually set up about once a month at different markets and breweries like Hardywood and Branch Market. Their next big event will be the Pickled and Fermented Festival, held at Center of the Universe Brewing, on September 15.

“When we sell, ‘Drop It Like It’s Hot’ Sriracha Jalapeno, which I came up with, sells first because people like spicy stuff,’’ Al-Qaddafi said.

Miller said the business can be a challenge, as the cucumbers must ferment for four weeks before they can prepare the jars to sell, but it gives the couple a chance to play with flavors, prepare names, and plan selling times.

“We have to think four weeks out and plan around that,” Miller said. “Which is kind of a thing I like. Just like teasing time stuff together.”

For now, the two are looking forward to growing their business, expanding their flavors, and exploring more with their website. In the meantime, you can keep up with on their Instagram, @pipeituprva. And you should, they’re kind of a big dill.

Doing What They Do Best

Richmond chefs and bakers have donned their aprons to bake goods, put on a massive bake sale, and put all funds towards Black Lives Matter... READ MORE

Capsoul exists to help diversify taprooms and bring new communities to the world of craft beer. Their latest effort in this direction is... READ MORE