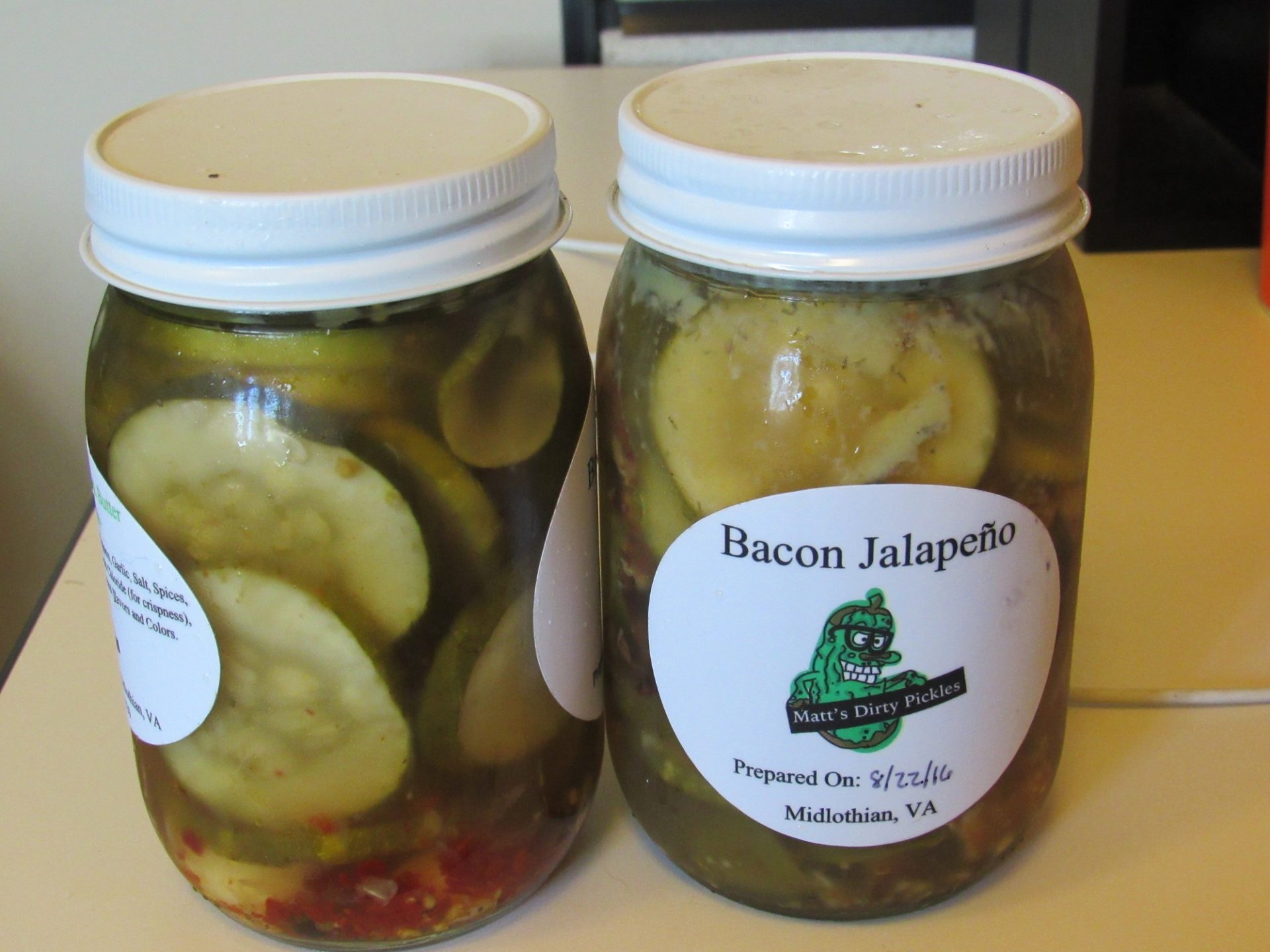 Pickles that pack a punch: Matt’s Dirty Pickles are stealing the show at local farmers markets

From bourbon bread and butter, to Sriracha, to just plain dill, Matt Ray’s pickles are in high demand at local farmers markets since he launched his business, Matt’s Dirty Pickles, in March.

From bourbon bread and butter, to Sriracha, to just plain dill, Matt Ray’s pickles are in high demand at local farmers markets since he launched his business, Matt’s Dirty Pickles, in March.

Selling eight different flavors of pickle chips and spears including bourbon bread and butter, classic dill, Sriracha, Jalapeno Bacon, Habanero Bread and Butter, Jalapeno Dill, and Dilly Beans and a sweet and spicy relish, Ray is quickly on his way to pleasing all the pickle lovers (including this girl) in the area. 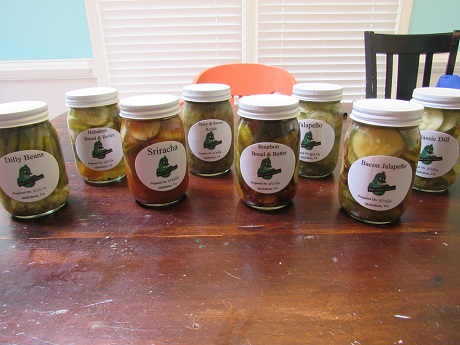 It’s taken off a lot faster than I ever expected,” Ray said. “It’s overwhelming to me how well it’s going and how much fun it is.”

Ray, formerly a case worker for Chesterfield County working with individuals with disabilities, sort of stumbled into his now flourishing business.

“I grew two cucumber plants a couple years go and didn’t realize how fast they produced,” said Ray. “I told my wife, ‘we can’t ever eat them all, I’ll make pickles.’”

Being his first dive into the brining business, Ray did a little research online and before long he was brining pickles with various fresh herbs and spices and sharing them with friends and family.

“I just took the flavors to a whole other level,” he said. “I started giving them away when I first started doing it.” 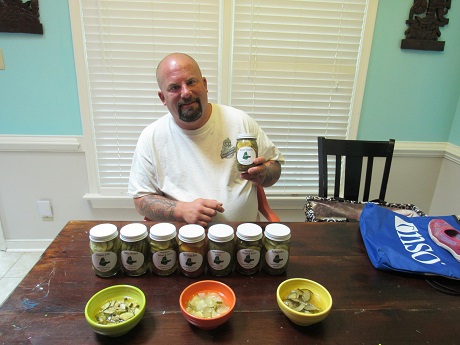 For the first two years he was just making the dill, and the Jalapeno Bacon to his friends, but the small operation soon began to add up.

“Buying the jars was really expensive before I got them wholesale, and it all cost a lot of money so I just started selling them to friends and family and they loved them,” he said.

Upon seeing the popularity among friends and family, and no longer able to churn them out for free, he thought he’d try his luck in the pickling business.

He quit his job in March and has since expanded to several farmers markets nearly every day of the week. He sets up his booth with jars and samples of pickles at the Chesterfield County Market, Hopewell Market, Magnolia Green, Great Big Greenhouse, and The Farm Market at Boulevard Flowers. 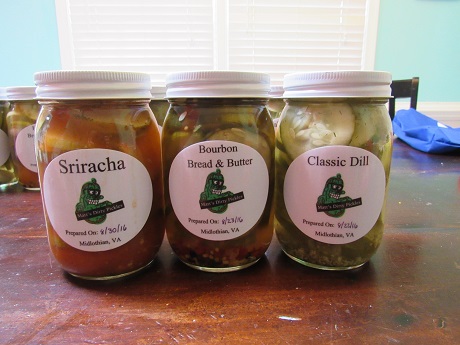 He also keeps them stocked at MuseMe Décor in Westover Hills, Outpost Richmond Westover Hills and Caboose Market in Ashland. Strangeways Brewing carries them, and Tazza Kitchen recently picked them up to use in their Bloody Marys.

Besides farmers markets and retailers, he also makes occasional deliveries for a small fee and pickle lovers who just can’t wait for their closest farmers market to come around, can set up an appointment with Ray to pick up their pickles at his house in Midlothian.

And his business has taken off since starting in the spring.

Two years ago when Ray was selling them to just friends and family he said his sales were around $2,000 and in the last six months they’ve increased seven to eight times that and word is spreading about his pickles. 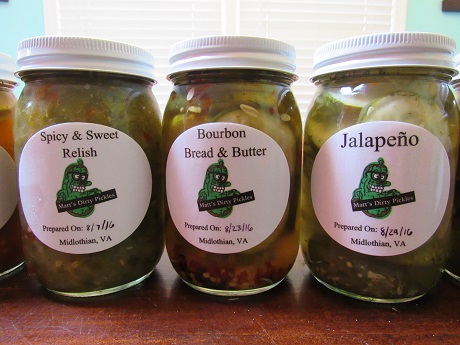 “A couple markets contacted me asking me to come to their market,” Ray said. “Another brewery contacted me after I started carrying at Strangeways.”

The bourbon bread and butter pickle, which fuses in cucumbers, crushed red peppers, garlic, salt, sugar, apple cider vinegar and according to Ray any cheap bourbon that’s handy, is his best seller.

I can’t stand just plain bread and butter so I decided on a bourbon one,” he said. “It just took off like a rocket,” he said.

“The bread and butter ones work really well on sandwiches or chopped up in salad, tuna salad, potato salad, things like that,” Ray said.

Ray cooks up the brines and jars the pickles at his friend’s restaurant in Petersburg, The Bistro at Market and Grove.

“I usually do five gallon buckets at a time of the dill, habanero, and the bourbon bread and butter,” he said.

He said he uses a basic vinegar brine and then adds spices and water.

For the Sriracha pickles, the hot sauce goes right in and gets boiled with the brine.

Ray’s sweet and spicy relish is also something that everyone should taste, even if you’re not a relish fan. I have never been keen on relish, but the sweet and spicy pickle relish is out of this world. It contains cucumber obviously, green peppers, onions, jalapenos, and red chili flakes.

When Ray started the business, he said he would let his pickles sit for a month once they were put in jars, but now lets them sit for a day or two and heads to market.

“I make them on Mondays and Tuesdays and go to market Wednesday, Thursday and Saturday,” he said.

At first using his garden for the cucumbers, but now Ray is going through 50 to 100 pounds of cucumbers a week, so he buys his products wholesale from Loving’s Produce.

He does still grow a few jalapeno peppers and ghost peppers, but gets a few peppers from Josh’s Jungle, a local greenhouse.

Speaking of peppers, Ray uses a Carolina Reaper pepper for a pickle that isn’t in his regular rotation, but he will make it occasionally and if you have ever tasted one, you know it packs just a tad bit of heat.

“It’s a blazing hot dill,” he said. “I make them every once in a while and people that buy them are really excited.”

Ray said he never thought that this is what he would be doing in life, but now he’s happier than ever. 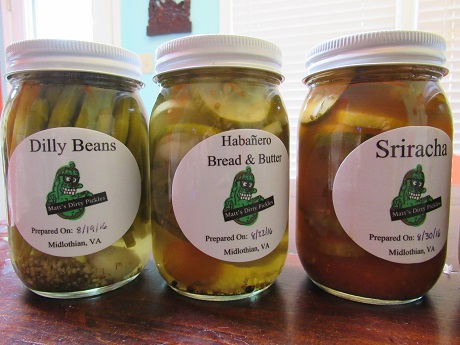 “I’ve always wanted to be my own boss, but never thought it would be selling pickles,” he said. “This just kind of fell in my lap.”

He’s looking to add a farmers market in the next few weeks and you can also be on the lookout for his pickles at Final Gravity soon.

Matt’s Dirty Pickles come in pints for $6 and quarts for $10. You can find him at the following markets: