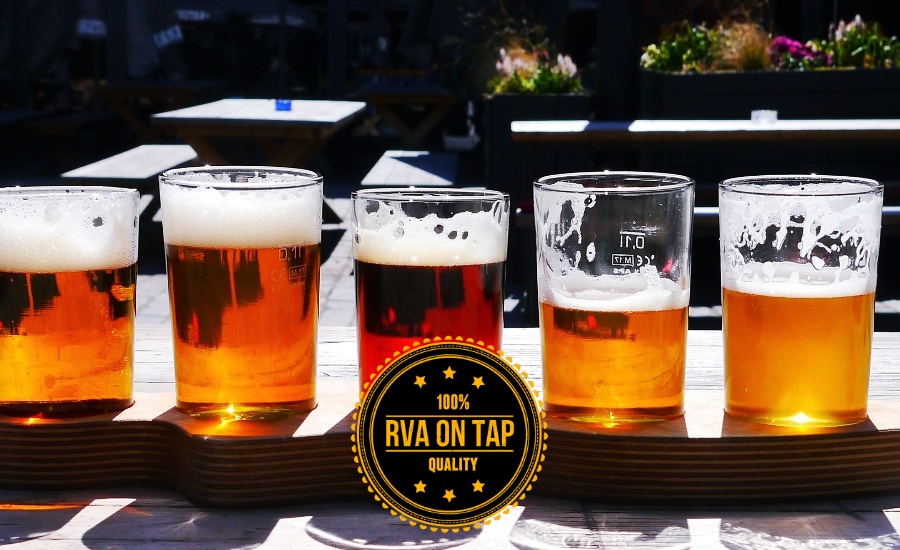 This week, we’re celebrating American Craft Beer Week and taking tours all around the city to celebrate the great history of beer in Richmond, from brand-new brews releasing to old-school locations from breweries in centuries past.

Before we jump into all the stellar brews coming out around town this week, Happy American Craft Beer Week, everybody! Some of our favorite locals at Three Notch’d RVA Collab House will be celebrating the occasion this week with special events across all four of their locations. Here in Richmond, the festivities started off on Monday with a special tapping of an old favorite, Big Poppa Biggie S’mores, and a Sour House tasting last night at the brewery. Tonight, you can catch Music Bingo at 7pm, or head out tomorrow night for their Flagship Thursday Happy Hour. Passion For A Cure drops Friday at the brewery, a Passionfruit-Mango Gose which was collaborated with the Cystic Fibrosis Foundation, in addition to their 65 Roses Hibiscus Blonde Ale. To close things out on Saturday, they’ll be doing special limited tappings of Cherry Current and American Sour with Apricots all evening, so head on out and drink up!

Starting off the history theme this week is Richmond’s 10th Annual Beeristoric Historic Taverns Walking Tour. If you remember from last fall, Beeristoric rode around in November, but this weekend’s tour marks the event’s first walking tour around historic tavern sites downtown. Supported by the organization and by An Bui of The Answer Brewpub, they’ll be visiting sites this Saturday like breweries from the American Revolution, 19th-century German immigrant spots, Christopher Newport’s “beer share” with Powhatans on Fulton Hill in 1607, and James River Steam Brewery — built by David G. Yuengling Jr., which is, you guessed it, the OG Yuengling’s son.

Brown Distributing has teamed up with Mike Gorman, a professional historian. “This is a celebration of our city and our scene, and I didn’t want to lose it,” Gorman said. “As long as there are people that want to hear about the past, present and future of Richmond’s beer community, I want to be there for them.”

Our River City is full of history, and this is a great way to be a part of it. If you’re up for the trek, the tour will walk about 1.5 miles in 2 hours (which really isn’t too far, if you’re familiar with walking around town), and will stop by places like Lickinghole Creek’s Shockoe Location and a few pubs along the way. They’ve only got 30 tickets available, so if you’re into it, get ‘em while they’re hot.

On to the next! Richmond Historic Haunts has teamed up with Three Notch’d Brewing, Buskey Cider and Bingo Beer Co. to do a similar walking tour through Scott’s Addition. Richmond Historic Haunts is the company that brought us some of our favorite Halloween events, and they’ve got even more on the books right now for history buffs. They’ve got Uncivil Wards (which finds the city’s lost Civil War hospitals and prisons), Rails & Sails (through the city’s oldest neighborhoods, to see how the James and trains contributed to the city’s rise), and now Brewing In Richmond to highlight over 300 years of fermenting.

Speaking of history, one of our favorite beers from last fall just made it. If you remember Smartmouth Beer’s Saturday Morning release in Norfolk, it was a Lucky Charms-flavored beer meant to recreate those delicious mornings from your childhood in front of the TV watching TV history’s best cartoons. Saturday Morning ended up becoming the most-hyped beer *in craft beer history,* which is a huge deal considering how many brews get the national beer scene pumped every season. They only had 100 cases to sell, and they ended up in the papers and on television even down to Florida — which is pretty impressive for a single beer, to say the least. A big congrats to Smartmouth on this one, and I hope another run comes soon so we get to taste it in Richmond!

Dreamlike and The Original Five Flavors are coming out for #FreshCanFriday, and they’re suited to their names. Dreamlike is pillowy-soft, big-bodied and full of citrus. “What’s that in the clouds over there?” says Hardywood, “A Dog? A Bunny?” Nah, booze. There’s no rush to wake up from this dream.

The Original Five Flavors is inspired by Lifesavers, and fruited to match the early days of a classic candy: with cherry, orange, lemon, lime, and pineapple. In beer form, it’s a tart ale, and this 5.0% ABV brew hits in pretty low to enjoy any day of the week.

Happy birthday, Castleburg Brewery! These guys are celebrating their third trip around the sun this year, and they’re throwing “one heck of a party” for it. For the occasion, head over to their spot on Ownby Lane this Saturday to eat, drink, and be merry with live music and free stuff! Yep, the first 200 people through the door get a free gift — so happy Castleburg’s birthday to you, if you make it over in time. They’ll have bands like Cashmere Jungle Lords and King Easy jamming throughout the day, with guest taps like Oozlefinch Craft Breweries Dude Blanket New England IPA, and Blue Toad’s Apple Blueberry Cider. Castleburg’s also bringing the return of the Queen to their castle, with The Queen’s Garde, Bier de Garde back to their taproom.

This week we’re also celebrating the 3rd birthday of the Richmond location for one of the nation’s largest craft brewers, Stone Brewing. Stone is not only one of my most favorite beers I’ve ever had, but an American favorite from coast to coast — and like we learned a few weeks ago at their movie release party, even across the Atlantic Ocean at their brewery in Germany (as the first American independent brewery to jump the puddle to Europe). On Saturday, come out and celebrate the awesomeness that is Stone Brewing at their RVA spot with unique variations of your favorite Stone brews, vintage releases, barrel-aged beers and plenty more.

Last night, The Veil Brewing Co. brought back Dub Razz Tastee. This extra-special release from our favorite Scott’s Addition folks is a smoothie-style sour ale, and even the color itself is enticing enough for me to want to go grab a glass of it myself. It was flavored with double raspberry in its creation, and it shows. If you’re in the market for a taste, head on out to The Veil while it’s still around, and grab a 4-pack while you’re at it.

Are you a lover of Hanover’s Strawberry Festival? Growing up, my hometown had a major-awesome strawberry festival every year, and some of my favorite days were spent there as a kid. For all of us Richmonders, the Hanover Vegetable Farms 4th Annual Strawberry and Wine Festival is coming up this weekend, and Intermission Beer Company brewed up something special for it. Strawberry Blonde is coming out on Saturday along with the festival, so grab a glass of this American Wheat Ale while you can — it’s got a light body, low bitterness, “and of course: Strawberries!”

Out on our favorite farm, Lickinghole Creek Craft Brewery is putting the ass in glass with this donkey-painted brew. Juicy #11 is fermented “hot and fast” with Kveik isolated from the Horrinfal region of Norway, according to its brewers, and its intense-hopping process with El Dorado, Lemondrop, and Idaho Gem hops push out a strong taste. Look forward to full-flavored notes of pineapple, fresh-squeezed lemons, and a bit of pithiniess in this one. You can grab one out on their beautiful 300-acre farm this Friday and sit back with live music and great grub as well.

Our friends at Strangeways Brewing have their second can release dropping this Saturday, the Vegan Vampyre. This 4.8% ABV Gose with raspberries and lactose pours from the vampire-esque can with a slight pink tint, and according to its brewers, it’s fruity, tart, and refreshing with “just enough sweetness from the addition of lactose to balance out the pucker.” In its creation, it’s made with white wheat soured in a kettle before being boiled with sea salt, Huell Melon hops and the additions of lactose with coriander. You can grab a pack this weekend, and they’ve got more on the way in the series coming up.

In darker (and delicious) news, DEATH is coming to Garden Grove Brewing & Urban Winery this Saturday. No, not real death — if it was, I wouldn’t sound so excited about it. Garden Grove’s Belgian Quadrupel, promptly called DEATH in the 10% ABV beer, is being resurrected into the taproom after its start in their brewery “on a cold Winter’s day” more than a year ago. This one’s for the heavy beer fans, with ripe and dark fruit flavors aged over 14 months in Cabernet Sauvignon barrels. DEATH is also a double-medal winner, with awards taken home in both the 2016 and 2017 Virginia Craft Beer Cups.

Blast Off! Gyrus Double IPA is heading straight through the Earth’s solar system this Friday at Final Gravity Brewing Company.

“The force field is strong,” they say, “and your defenses are weak against this one.”

Brewed with Loral, Calypso, and Amarillo hops, this recipe is packed with floral, grapefruit, tropical, and apple-pear tastes. Catch it this weekend, and head over to Final Gravity tonight for Dart Night if you’re looking good on the board and looking for prizes. Come one, come all, because teams don’t matter: your teammate will be drawn randomly, which means single players are invited to come try their hand as well. And if you’re really into it, you can even bring your own darts. Game on!

Väsen Brewing Company’s got a secret. This Saturday’s can release is a not-so-well-kept secret they let out on purpose, because it’s too good to keep to themselves. Cashmere Secrets is a velvety-smooth DIPA made with Cashmere, Vic Secret, and Mosaic hops and packed with flavors like pineapple, peach, raspberry, and smaller hits of coconut and pine. It’s dry-hopped and ready to make its debut into your mouth, available in cases as well.