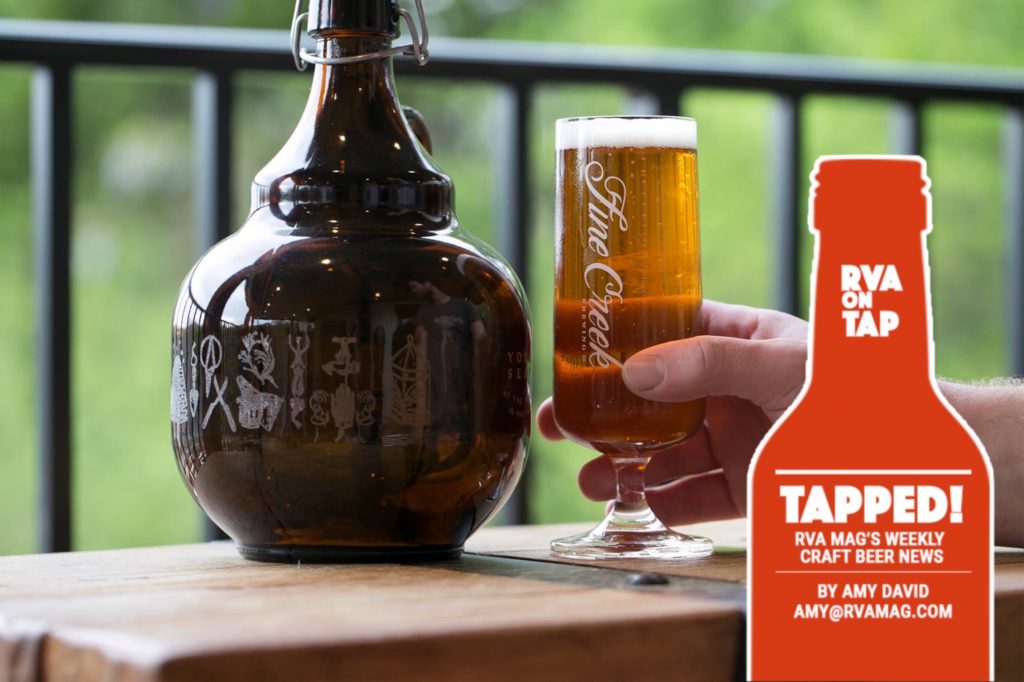 Sunday is Fine Creek Brewing Company’s One Year Anniversary Party and the Powhatan brewery is celebrating big! They will have a limited amount of their Whiskey Barrel Aged Imperial Stout on draught, as well as bottles for sale. Biere de Miel, a farmhouse-style ale brewed with some local Hot Honey will also be flowing in the taproom. Eli Cook and Cook County Bluegrass will be playing all day Sunday. Fill up on burgers and corn out on the grill. Fine Creek’s Game Winner IPA is also back on draught. Head out to the brewery located at 2425 Robert E. Lee Road to help them celebrate!

Isley Brewing returns this Friday with their weekly infusion, this go around its “Isley Goes Nuts,” a peanut butter gose. Sounds a little crazy, but I’m willing to try anything with peanut butter! Hits the taps Friday at 4 pm.

To Celebrate American Craft Beer Week, Lickinghole Creek in Goochland is giving complimentary tours and tastings. Sample their Belgian-Style Ale, Three Chopt Tripel, and all its selected Barrel Aged variants, along with their Premium Barrel Aged Russian Imperial Stout, The Enlightened Despot and all its flavored Variants this Wednesday and Thursday. Tickets here.

On Saturday, Castleburg Brewery will release As You Wish, an English Mild Ale in honor of Prince Harry and Meghan Markle’s Royal Wedding. Queen Elizabeth approved!

Hardywood will release its CRASSEUX, a 6% a Grisette with notes of cantaloupe and honeydew that come alive once you get a taste along with a little spice. Crisp lemon peel and tropical fruits take over in the finish. Available in Richmond, West Creek & Charlottesville. Draft + 4×16 oz. to go ($15). The brewery will also release PINT OF NO RETURN, an American Lager by Hardywood Park Craft Brewery, The Happy Hour Guys, and The Phantom of the Opera on Broadway. This clean and crisp lager pours as black as night and you’ll get hints of toasted pecan, a mild hint of black currant and smoothly roasted undertones. A portion of the sales from Pint of No Return will benefit Musicians On Call, supporting their vision of a world filled with the healing power of music. Proudly brewed in Richmond, Virginia for The Broadway Brews Project. Available in Richmond, West Creek & Charlottesville. Draft + 4×16 oz. to go ($16).

Triple Crossing’s downtown location will have Coconut Night Lands, a  10% Imperial Stout with heaping amounts of toasted coconut with notes of chocolate and caramel. Crowlers starting at noon.

Strangeways Brewing is celebrating with tons of fun activities for American Craft Beer Week. Check out the schedule below.

Final Gravity Brewing Co. is back with its weekly IPA release this Friday. This time, its “Looks Like Another Love TKO Citra IPA. Savor strong citrus and tropical flavors as you lose all thoughts and sense of time.

Twisted Ales Brewing how has Twisted Musketeers, a chocolate milk stout for you to try out. Might seem heavy for this weather, but its chocolate so you can’t go wrong there.

On Saturday, Midnight Brewery has a refreshing beer release to cool you off with its Watermelon Lime Kolsh. Made with fresh watermelons and lime, the subtle juicy flavor is the brewery’s personal twist on their regular New Beginning brew.

On Thursday, the brewery is releasing Michelle’s White Wedding Belgian Ale. The 5th rendition of this Belgian White Ale is brewed in honor of the anniversary of Three Notch’d RVA Brewmaster Dave Warwick and his wife, Michelle. Pint specials run until 7 PM. Stick around for trivia which starts at 7 pm.

On Friday, Three Notch’d is keeping the American Craft Beer Week celebration going with its Bee Student release, a honey bourbon barrel imperial milk stout brewed in partnership with the University of Richmond. The official release will be happening in mid-June, but head to the brewery this Friday for a sneak preview!

Saturday will culminate ACBW at Three Notch’d will their big celebration. Some of the Three Notch’d favorites are making their brief return on tap (tappings to be announced at the end of the week), Live Music by Planet Hunting Methods at 7 pm and wood-fired pizza in the city from our friends at Pizza Nostra RVA from 3-8pm.

On Friday, Petersburg’s Trapezium Brewing Company will release its Strawberry Blonde Ale. This beer took home a Gold medal at last year’s Virginia Craft Brewers’ Guild Awards. It was the favorite beer of our the brewery’s friend, Cecil Martin, who passed away. For this release, the brewery is teaming up with his family this year to celebrate Cecil and raise funds for Comfort Zone Camp, which serves children who have lost parents or primary caregivers. $1 from each Strawberry Blonde pint sold will go towards the organization.

Make sure you head out to Intermission Beer Company this weekend as well because the Glen Allen brewery has a quite a diverse lineup in its taproom including a pale ale, smoky wheat, milk stout, Vienna cream, an IPA, and an Irish Red Ale.

Tomorrow is Third Thursday at The Veil Brewing Co. which means between 5 and 8 PM, 15 percent of proceeds will be donated to a local charity. This time, its Celebrate RVA, a local non-profit organization which works to give disadvantaged children a memorable birthday celebration in a safe and fun environment.  Bunsik Dumplings will be serving the most delicious dumplings so go out for beer and delicious food for a good cause!