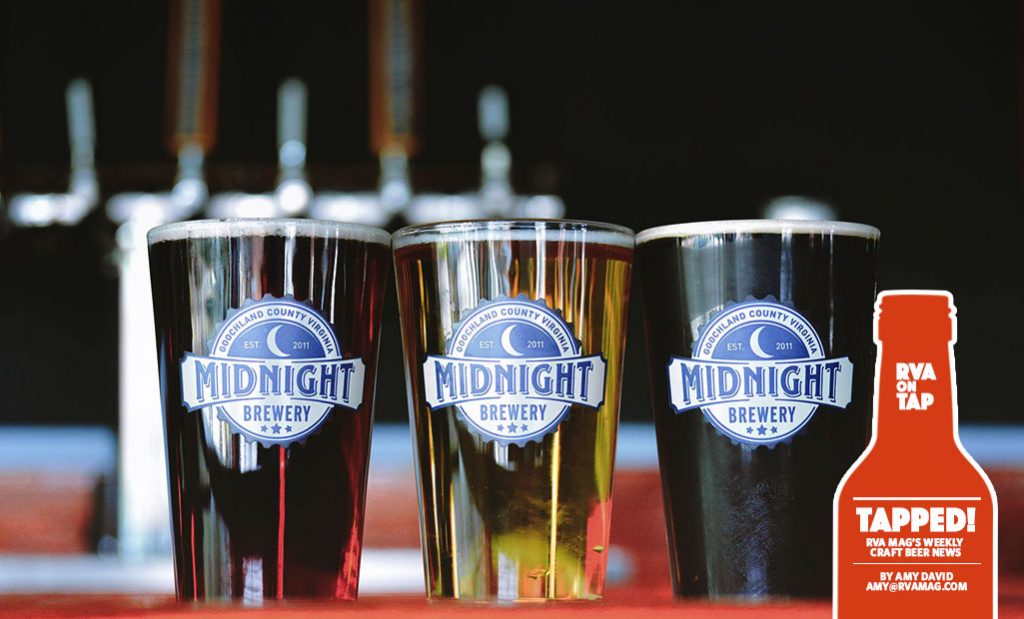 Goochland’s Midnight Brewery is turning six this Saturday, and they’re celebrating in a big way. Come out for food from Intergalactic Tacos & Haywood Grill and Music from 804’s & Flashlight Tag and of course, good beer.

Triple Crossing’s Fulton location will have cans of All Neon Like, a 6% IPA with massive amounts of ripe pineapple and peaches for a tropical delight for your summery weekend. $15 per 4 pack.

This Saturday, Castleburg Brewery will release their Run the Gauntlet Pale Ale is #8 in the series. The brew is a single hop pale ales with notes of tangerine for a fruity taste.

This Friday, Final Gravity Brewing Co. will bring back its 12 Parsecs Double IPA. This fan-favorite 8% DIPA burst with citrus and pine aroma while tasting ever so smooth.

Three Notch’d Brewing RVA Collab House returns this Thursday with its weekly collaboration. This time, its Drip Drop, A DIPA made in partnership with local art gallery, Endeavor RVA. This blush orange New England Style IPA clocks in at 7.7% and brings with it notes of fruit and melon.  PINT SPECIALS starting at 4 PM when we tap the first keg! Pint specials run until 7 PM. Stick around for trivia which starts at 7 pm.

Ardent Craft Ales will release its Weissbier brew this Thursday, a traditional, German-style wheat beer brewed with 100% German wheat, malt, hops, and yeast. With Weissbier, you can expect plenty of citrus and vanilla notes in the aroma and classic clove and banana character.

For Mother’s day, Fine Creek Brewing Company will have a house made Vanilla Sponge Cake layered with strawberry preserves and white chocolate ganache and you can wash it down with the rest of their Whiskey Barrel Aged Imperial Peated Porter they have left in the taproom. Willie DE playing with both Saturday and Sunday.

On Sunday, Buskey Cider will have a cider sangria to celebrate all you mothers out there. For this infusion, the cidery has combined strawberries, lemons, limes, oranges, and, arugula to give it a punch, all over a Tart Cherry base. All mothers will be getting a rose as well so perfect opportunity to swing by after a nice brunch.

On Saturday, Blue Bee Cider will have Bacon truffles and cider for Mother’s Day. Alongside with Blue Bee Cider’s “Rosé May” celebration, which consists of four berry-infused ciders, for this month they will also have four Motherly-Inspired Bacon Truffles. For This event, customers are to buy their Cider & Bacon Flights separately. There will be a limited amount of pre-sale tickets for the Bacon Truffles, as well as a limited amount on site the day of the event. See link for details on the flights.

This Friday, Isley returns with its weekly infusions and this go around its a spearmint twist on a crowd favorite, “Charlie’s Barley” American IPA. Brewery open 4-10 PM and Happy Hours starts at 4 PM.

Center of the Universe will serve up a Mother’s Day brunch this Sunday, with a day filled with live music by female-fronted acoustic rock band The Articles, delicious Beer Bloody Marys and MOMosas, and yummy British restaurant inspired cuisine provided byCurry in a Hurry.

And on Saturday, Strangeways Brewing is hitting you with a triple beer release. The brewery’s rolling out Sneed’s Raspberry Wheat Ale, Hey Brett (You Know What Time It Is) Oak Aged Lager and — our tribute to American Craft Beer Week — Not So Common Kentucky Common Cream Ale.