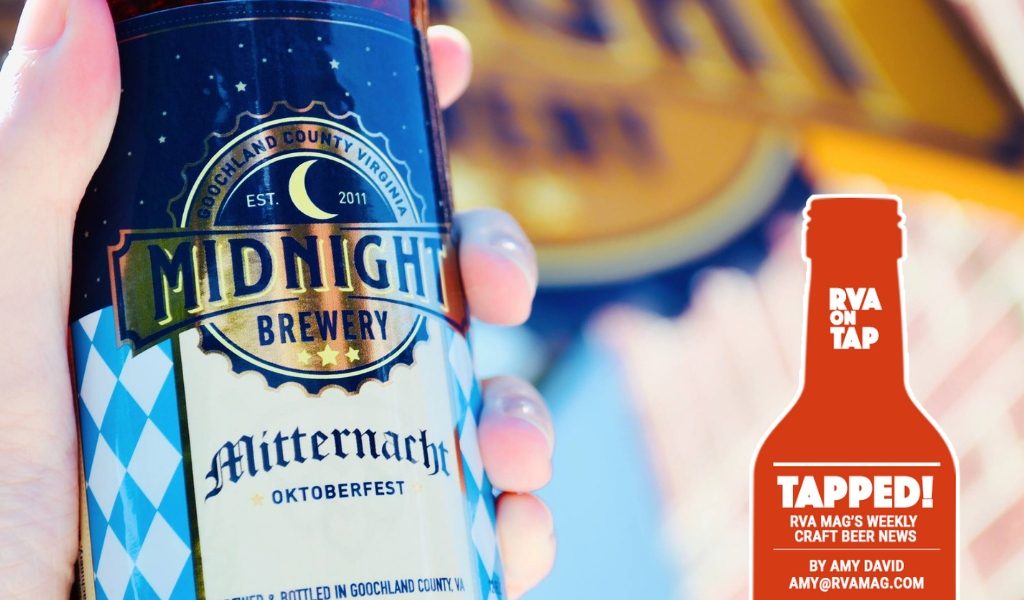 So last week we told you about The Answer Brewpub celebrating its four-year anniversary. The West Broad Street brewery, founded by Mekong owner An Bui, kicked off events this Monday, and will have festivities for every day of the week and no tickets are required, just your beautiful faces! They have a ton of releases and special edition glasses for sale. Check the link for details and make sure you stop in and celebrate with them for giving us four years of delicious brews.

We also told you about Final Gravity Brewing Co. third anniversary. Due to the hurricane, festivities were rescheduled for this Saturday so don’t fret if you couldn’t make it out! The Lakeside brewery and they will be taking over the large parking lot out back and bringing in food from Pizza Nostra RVA, Charm City Crab Cakes, & Gaucho, a plethora of amazing guest taps from local and regional breweries, special Final Gravity Anniversary brews, tunes by DJs PJ Sykes and Melissa Koch, live music by East of Afton, and special anniversary merchandise. 12-6 PM.

Intermission Beer Company in Glen Allen will release their All Hallows Ale, an autumn harvest ale with maple and cinnamon this Friday for their Fall Kickoff Party, which they are throwing with the creepy folks over at Red Vein Haunted House. Join them for scares and door prizes, a Halloween Costume Contest, food from Firesides, and boozy cupcakes by Lush Cupcakes,

Hardywood has its Autocorrect and Mango VIPA releases for you this Friday at both locations. AUTOCORRECT is a hazy IPA brewed with Citra, Mosaic and Mandarina Bavaria, then dry hopped with El Dorado. The brewery has also added mango to their VIPA flagship brew for an extra punch of fruity flavor! Draft and growlers.

And On Sunday, make sure you stop by Maymont for a beer dinner featuring several top Richmond chefs which will be serving up five courses paired with five Hardywood brews. $175 per person (all inclusive, includes gratuity). Snag your tickets here.

Isley returns this Friday with its weekly infusion. This time, it’s a toasted marshmallow brown ale to get you all geared up for fall. They first tried out this brew two years ago, and now they’re bringing it back so, make sure you get some if you didn’t have the chance to the first go around. Food from La Bete.

Midnight Brewery will release its Mitternacht Oktoberfest this Saturday, a Bavarian-style Amber Lager that gets you right in the spirit of Oktoberfest festivities. Prost!

Triple Crossing’s got a triple release for you so hope you’re thirsty! This Friday, at their Fulton spot they will have their Falcon Heavy, an 8% DIPA with notes of peach, mango, and papaya and Citra, Falconers Flight and Vic Secret hops. The brewery will also have Infinite Reflections, a 10% Imperial Stout. This brew gets conditioned on judicious amounts of vanilla, cacao nibs, and cinnamon. Vanilla, bakers chocolate, and smoky cinnamon sweetness round out this beautiful brew. Finally, we have their Mosaic Triangles IPA, a bright and citrusy brew with notes of fresh clementines and tangerines.

Vasen is getting into the Oktoberfest spirit this Friday, with some live polka music, the release of their Festbier, and German fare from Bon Are Provisions who will be serving up brats, kielbasa, and freshly made sauerkraut all evening. Prost!

Castleburg’s back this Friday with None Shall Pass, an Oatmeal Porter with notes of chocolate and coffee that will knock you right in all your Fall feels.

On Monday, Garden Grove Brewery & Urban Winery will host a beer dinner with Chef Craig Perkinson of Southbound. Five courses will be matched with five of GG’s brews. $39/per person. Grab your tickets here.

This Saturday, Buskey Cider will release its Thai Chili Ginger Plum cider for those looking to venture outside beer for something with a little kick.

This Friday, Ardent Craft Ales will release its brew, “Old Molasses Ale,” a collaboration with the John Marshall House. They brewed this special historical beer to celebrate John Marshall’s birthday. This beer was based on a recipe from John Marshall’s cousin, Mary Randolph, that she brewed in the late 1700s and featured a late addition of molasses in the boil.

Get your steins ready and get out your lederhosen! This weekend, St. Benedict kicks off its 14th Annual Oktoberfest celebration. Free admission, over 50 beers on tap, tons of delicious German eats, polka, dancing, and a stein-holding competition. Prost!