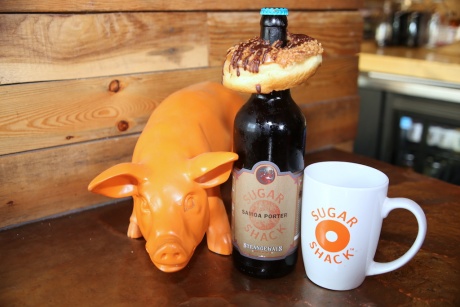 Do you like donuts? Do you like beer? Those are both stupid questions because you’re probably reading this from RVA and everyone in town loves both of those things (and if you don’t like it you can git out!)

“Everyone was clambering for Sugar Shack, so we were excited they chose to do something with us,” said Cheyenne Burnham, Community Relations Director over at Strangeways. She said Tanner Rigsby, the former kitchen manager over at the Lombardy Sugar Shack location, used to frequent their brewery and it wasn’t long before they decided to work together.

Rigsby spoke with his Sugar Shack boss and got approval to go HAM on the collab and within a few months the first batch of Samoa Porter was born.

“The coconut’s really good,” said Rigsby. “You can smell it in the beer and it’s good on the back end. You can taste it on the lips.”

Rigsby and Strangeways debated flavors at first, with the fame of their maple-bacon flavored donut as another possible brew flavor. But they’d seen that pairing before, and the “tastes like a Samoa” donut topping their favorites list, so this option was a no-brainer.

“When you’re doing porters you’re working more with malts,” said Burnham. “And that’s how you’re gonna get the more roasted and toasted caramel and yummy flavors that are going to come naturally from the malts.”

Reception to the brew has been great so far, with a successful release party this past weekend and one frequent Strangeways fan, Hans VonDutchman, singing its praises.

“I’m excited that it doesn’t taste like a donut, but the properties and the flavors are close to what a donut is,” VonDutchman, who may or may not be Strangeway brewer Griffen Hans, said. “It’s got a nice chocolatey, nut caramel deal. When it warms up a bit you’ve got that coconut-sweetness coming through. I’m glad it doesn’t taste like a mounds bar with that over coconut forwardness.”

Back here at the RVAMag office, we too were enamored by the new release.

With the full body of the porter base and the sweetness of the caramel and chocolate after-tastes, this is a beer which could stand out among the many many unique brews coming out of RVA. Coming in at only 7% ABV, it’s surprisingly light and enjoyable after dinner, or any time of day (breakfast… brunch?).

This is the first collab Sugar Shack has done, but Rigsby said the process so far has been great. “Everybody seems to be really happy all the way around, and Strangeways said they might be down to make it a yearly thing,” he said. “Maybe not Samoa, but something different next year.”

Sounds good to us!

The only place you can pick up the new Samoa Porter is at Strangrways’ brewing location- 2277 Dabney Rd. Richmond, Virginia – you can get it in 750 Mls, or in growler pours (while lasts!)