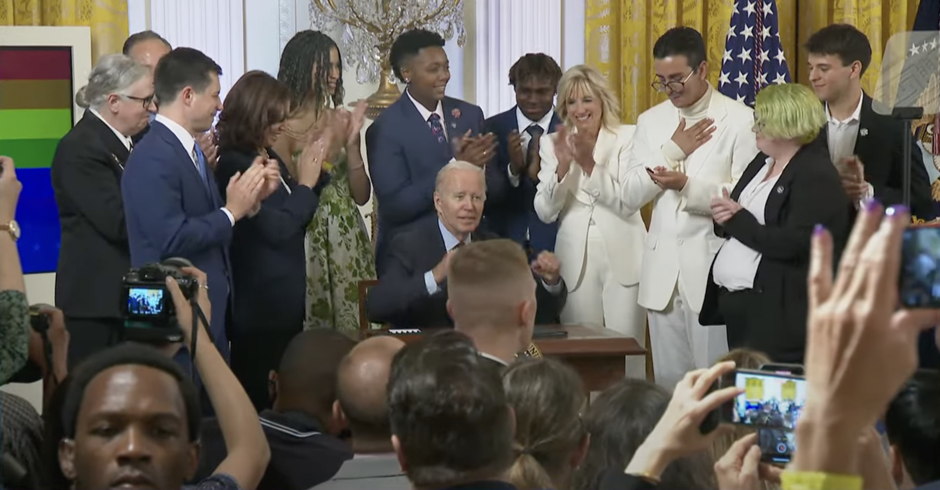 Biden Order: It Is the Policy of the U.S. Gov’t. to ‘Defend the Rights and Safety of LGBTQI+ Individuals’

President Joe Biden has declared it is the policy of the United States Government to defend the “rights and safety” of LGBTQI+ individuals in a historic executive order that encompasses several executive branch agencies and extends that policy into international areas. It effectively directs the federal government to use its resources to work to ban dangerous and harmful “conversion therapy” — not just in the U.S. but “around the world,” and to support and protect LGBTQIA+ youth and older LGBTQIA+ individuals in areas including health care, education, housing, and justice.

“LGBTQI+ individuals and families still face systemic discrimination and barriers to full participation in our Nation’s economic and civic life,” states President Biden’s executive order, which he signed at a White House LGBTQ Pride Month celebration Wednesday. “These disparities and barriers can be the greatest for transgender people and LGBTQI+ people of color. Today, unrelenting political and legislative attacks at the State level — on LGBTQI+ children and families in particular — threaten the civil rights gains of the last half century and put LGBTQI+ people at risk. These attacks defy our American values of liberty and dignity, corrode our democracy, and threaten basic personal safety. They echo the criminalization that LGBTQI+ people continue to face in some 70 countries around the world.”

“The Federal Government must defend the rights and safety of LGBTQI+ individuals,” President Biden states in his massive 3000-word “Executive Order on Advancing Equality for Lesbian, Gay, Bisexual, Transgender, Queer, and Intersex Individuals,” under the “Policy” section.

“It is therefore the policy of my Administration to combat unlawful discrimination and eliminate disparities that harm LGBTQI+ individuals and their families, defend their rights and safety, and pursue a comprehensive approach to delivering the full promise of equality for LGBTQI+ individuals.”

The order attempts to override state-level attacks on the LGBTQ community by directing the U.S. Dept. of Health and Human Services to “protect LGBTQI+ individuals’ access to medically necessary care from harmful State and local laws and practices,” and “promote the adoption of promising policies and practices to support health equity, including in the area of mental health care, for LGBTQI+ youth and adults.”

Going even further, the order directs “the Secretary of State, in collaboration with the Secretary of the Treasury, the Secretary of HHS, and the Administrator of the United States Agency for International Development,” to “develop an action plan to promote an end to” the use of conversion therapy “around the world.”