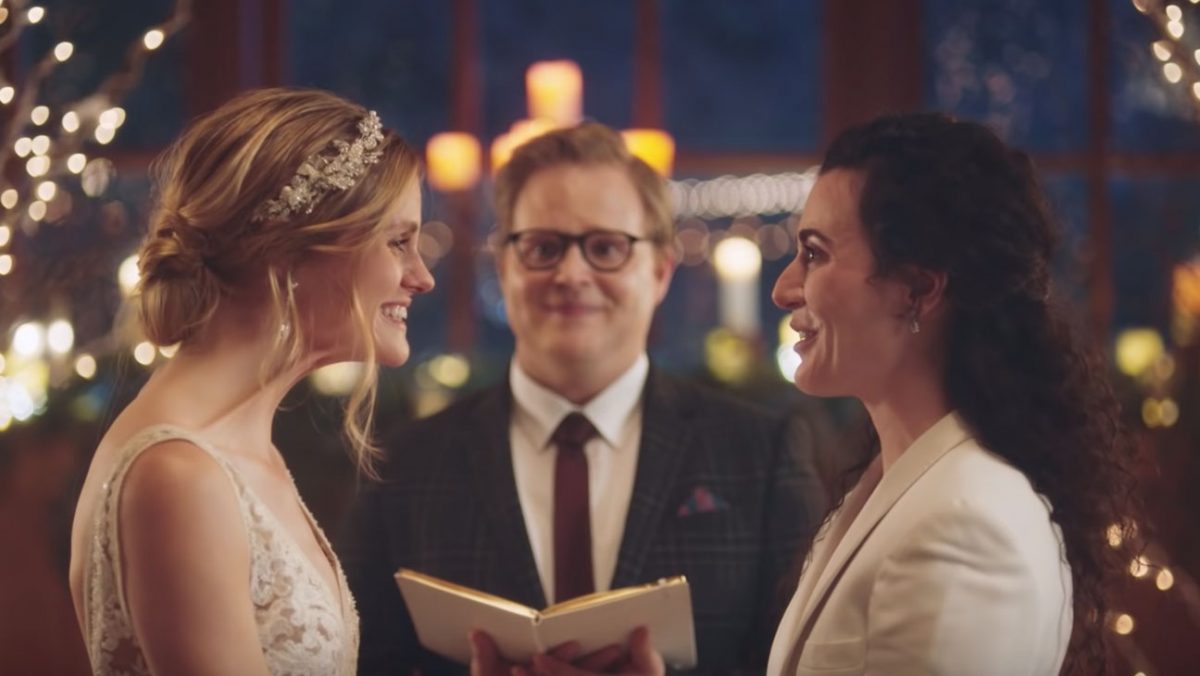 Hallmark Channel Loves the Gays, As Long As You Don’t Tell Anyone

Due to backlash, the Hallmark Channel pulled a commercial featuring a lesbian wedding kiss… but doing so caused an even bigger backlash.

Last week yet another corporation decided to hop in line to audition for the role of this year’s Grinch. Hallmark Channel, best known for horrible but fun Christmas film marathons and reruns of The Golden Girls, decided to throw their hat in the dubious ring. When certain people complained about a commercial from wedding paper company Zola that featured a lesbian couple kissing on their wedding day, Hallmark pulled the plug.

It’s actually adorable, to the extent that any commercial can be. Watch it before we go on:

The certain people in question would be wannabe-notorious conservative advocacy group One Million Moms. You may know them from their previous attacks on Ellen DeGeneres and JC Penney’s, who also featured LGBTQ families in their marketing. They complained to Hallmark and presented a petition that ironically only featured 25,000 signatures. I suppose the other 975,000 moms were busy at Chick-Fil-A that day.

Naturally, the spokespeople for Hallmark had a contradictory answer about how the four out of six commercials from Zola were pulled due to public displays of affection – despite one of the two that remained involving PDA between a heterosexual couple.

“We are not allowed to accept creatives that are deemed controversial,” a representative from Hallmark told The New York Times. Zola heard the message loud and clear, and made it clear where they stand.

“The only difference between the commercials that were flagged and the ones that were approved was that the commercials that did not meet Hallmark’s standards included a lesbian couple kissing,” said Mike Chi, Chief Marketing Office of Zola to The New York Times. “Hallmark approved a commercial where a heterosexual couple kissed. All kisses, couples, and marriages are equal celebrations of love, and we will no longer be advertising on Hallmark.”

Of course, after the news of Zola’s commercial takedown went public, Hallmark was blasted by many from the LGBTQ and ally community, including Ellen DeGeneres herself, who tweeted to the company, “What are you thinking? Please explain. We’re all ears.”

Isn’t it almost 2020? @hallmarkchannel, @billabbottHC… what are you thinking? Please explain. We’re all ears.

By last Sunday, Hallmark had wilted under the pressure, and released a statement saying they’d be reinstating the Zola ads.

“The Crown Media team has been agonizing over this decision, as we’ve seen the hurt it has unintentionally caused,” Hallmark CEO Mike Perry stated. “Said simply, they believe this was the wrong decision. Hallmark will be working with GLAAD to better represent the LGBTQ community across our portfolio of brands. The Hallmark Channel will be reaching out to Zola to reestablish our partnership and reinstate the commercials.”

Perry also added an apology, stating, “Our mission is rooted in helping all people connect, celebrate traditions, and be inspired to capture meaningful moments in their lives. Anything that detracts from this purpose is not who we are. We are truly sorry for the hurt and disappointment this has caused.”

Of course, the question then becomes… will they stick to this position? Or will the backlash to the backlash inspire them to flip-flop back in the direction of the One Million Moms crowd? Time will tell, but it’s hard not to be skeptical.

Once again, it seems that we can’t have nice things, even when it comes to Christmas films, which should otherwise be wholesome entertainment for literally everyone. The worst part is how unsurprising it all is.

Ash is a writer and improviser from Richmond. She has a BA in English from VCU and an associates in Theater. When she isn't writing or screaming on a stage, she can usually be found wherever the coffee is. Bill Murray is her favorite person along with her black cat, Bruce.
Topics: Ellen DeGeneres, Hallmark Channel, lesbian weddings, One Million Moms, same sex couples, Zola