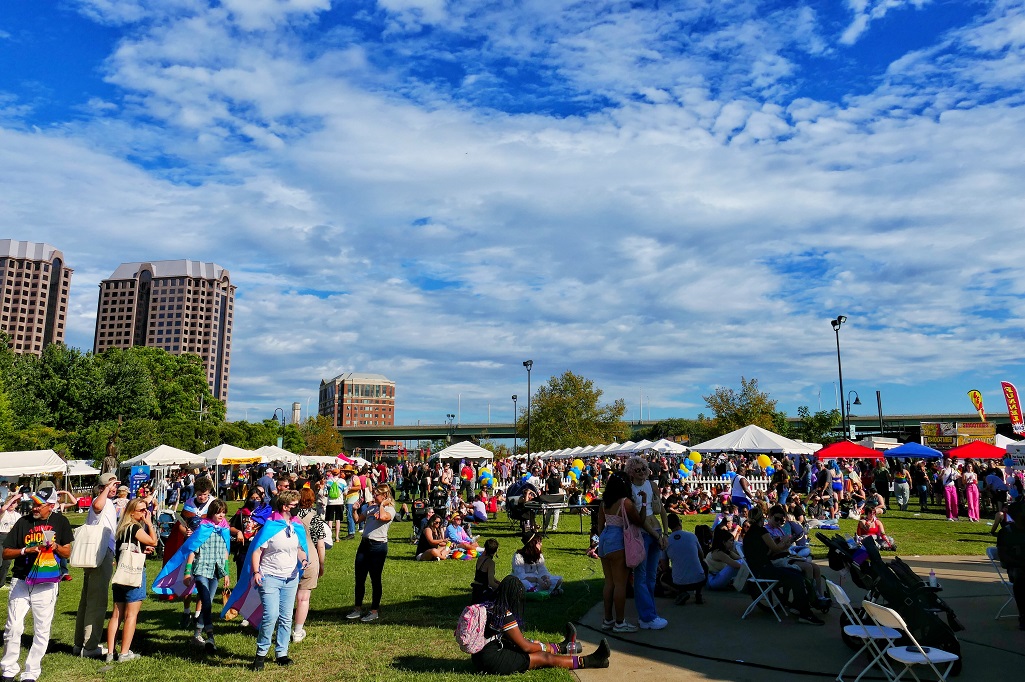 You aren’t really at Virginia PrideFest until you cross the walking bridge onto Brown’s Island. But last Saturday, September 24, passerby could be forgiven if, even several blocks away on Cary St, they still felt like they were somewhere on the outskirts of the 2022 edition of VA Pride’s main annual event. Throughout the afternoon, people sporting Pride flags and rainbow gear could be seen gathering in happy clusters pretty much everywhere within a one-mile radius of Brown’s Island.

Due to the pandemic, PrideFest didn’t take place in 2020 or 2021. Last weekend was the first time this statewide gathering of Virginia’s LGBTQ community had occurred in three years. And during Saturday’s festivities, it was clear even if you were still several minutes’ walk from Brown’s Island that the community felt a strong need to make up for lost time.

Once you crossed that bridge onto Brown’s Island, it became undeniable. Before we’d even walked down the steps onto the island proper, my wife and I were having to dodge other individuals and groups, stake out our space and stick to it. Even in a position far from either performance stage, we were in the middle of a crowd the likes of which I haven’t seen since I walked down a Manhattan street late on a spring afternoon. There’s no other way to say it: the place was crowded.

I have no idea how many people came to Brown’s Island for Virginia PrideFest this year; all I can tell you for sure is that the organizers were expecting to break records. Considering how many people probably only spent an hour or two on the island over the course of the day, I would fully believe that the final attendance numbers from beginning to end of PrideFest stretched into six figures. Even if not, though, there were definitely a ton of people there. And everyone was having a magnificent time.

We all know that the LGBTQ community is under siege from hostile forces, here in Virginia and across the nation. Only the day before PrideFest, the Youngkin administration had released new restrictive guidelines for transgender and non-binary youth attending Virginia’s schools. Protests, which made news earlier this week, were already being planned. And yet, on Brown’s Island, the many young people in attendance were doing fine — celebrating their opportunity to be together with many different generations of Virginia’s LGBTQ community, and to be their true selves, no matter what the wider world might think of that.

Really, this kind of thing was going on all over Brown’s Island. Normal suburbanite types walked the midway side by side with people in elaborate, brightly colored outfits. The full spectrum of gender presentation was on display in glorious fashion, and those who enjoyed drag performance and costumery in general didn’t have to wait for the professional drag queens to hit the stage: there were plenty of people in the crowd who’d donned their finest gender-bending fashions to celebrate.

There were also plenty of groups who’d staked out booths in order to meet Virginia’s LGBTQ community on their home turf. While I’m not sure whether the slight decrease in corporate booths on the midway is a good sign (less commodification of LGBTQ identities) or a bad sign (a chilling political effect making corporations more nervous to embrace us than they were when, say, Obama was president), it was nice to see the significant increase in advocacy groups, helpful resources, and community organizations.

Maybe I just knew where not to look, but I didn’t see hide nor hair of the infamous Log Cabin Republicans, or any other right-wing organization. I did see the Democratic Party of Richmond, though — they were registering people to vote right there at their booth. Voting certainly isn’t enough on its own to save us at this point, but it’s a great starting point, and as far as I’m concerned, the more LGBTQ Virginians exercise their right, the better.

As for me, I let my geeky tendencies loose as I explored the booths. I got information on how to get a Henrico County Library card from a helpful library volunteer, who bonded with me over queer sci-fi and reading ebooks on our phones. I got stoked about a booth full of LGBTQ-friendly graphic novels, and grabbed a couple of free comic books. And of course, I had the inimitable experience of being handed finished copies of a magazine I edited by a volunteer I’d never met. That’s always a wild time.

If I’m honest, the entire experience was a tiny bit overwhelming, at least for me, a fortysomething introvert with tendencies toward anxiety. At times, I had to take a minute and focus on the performers on the nearest stage, or the flyers on the table at the nearest booth, in order not to panic a little bit at the sheer parade of humanity around me. Regardless of any lingering nerves, though, I was tremendously heartened to see what an overwhelming, positive response this gathering brought in.

Because listen — that heat we’re taking right now? It’s not going away anytime soon. We’re gonna have to fight the powers that be who see the LGBTQ community’s massive gains in rights over the past half-century as a problem to be eradicated. We’re going to have to take to the streets, to make our voices heard — just like those students did on Tuesday, three days after PrideFest at Brown’s Island. But like The Byrds told us a long time ago, to everything there is a season. A time to protest, and a time to party. Last Saturday at Brown’s Island, it was time to party, and Virginia’s LGBTQ community brought the fire. Great job, everyone. I’m already excited for next year.

All Photos by Sara Wheeler