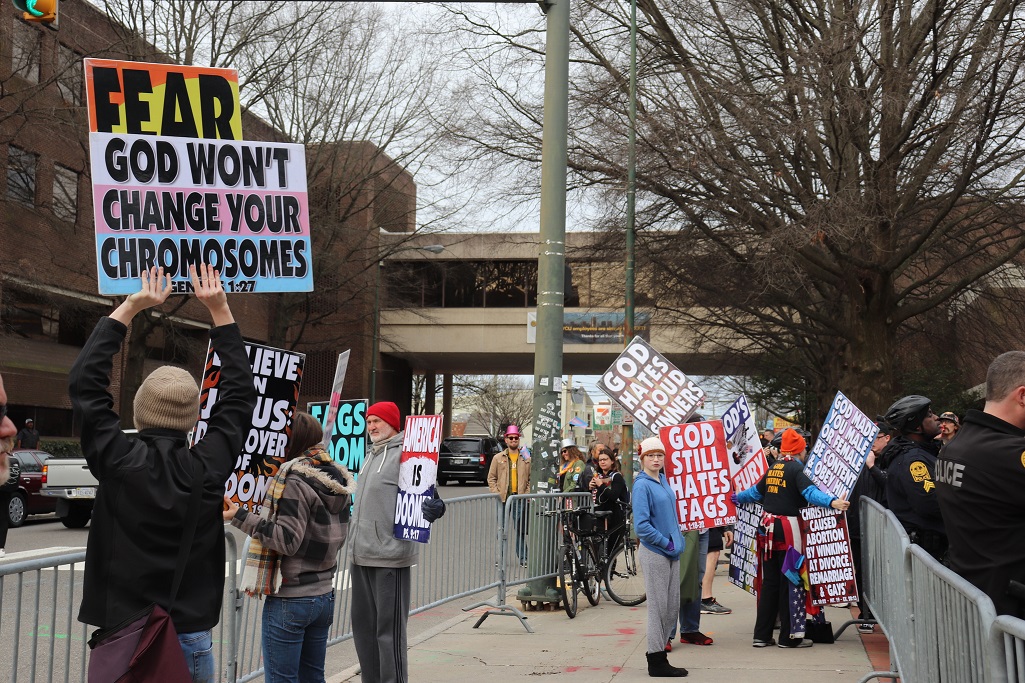 The notorious anti-LGBTQ hate group were met with widespread derision during their protest at VCU on Monday.

At VCU Monday, students, metalheads, and the general public came out in support of the LGBTQ community to counter-protest the Westboro Baptist Church’s visit to campus. Westboro Baptist Church (WBC) were in town to protest against the existence and political power of Delegate Danica Roem, the first transgender person elected to state-level political office in the United States.

Even before the protest took place, it had already resulted in unintended consequences for WBC. Their attacks against Danica Roem, who represents the 13th District in Virginia’s House Of Delegates, helped strengthen Roem’s campaign for re-election in November. Roem reported in a tweet Monday night that she was able to raise over $36,000 for her re-election campaign through her #WestboroBackfire online protest.

Final tally from the 11 days of the #WestboroBackfire, just from online donations (excludes checks):
1,009 donations
$36,046 raised
Thank you and good night! pic.twitter.com/EKRh59iuBy

Police presence was large, and included two police officers on horseback. Over one hundred counter-protesters were present as well; some dressed in wigs, others dressed in pride flags, and one person even played a guitar. Members of local metal band Lamb Of God brought kazoos and other plastic instruments, intent on drowning out the WBC members who’d shown up.

Advance press for the event had focused on the fact that Lamb Of God vocalist Randy Blythe was encouraging fans to come out and denounce the WBC, but the bigger story was how many representatives of the VCU and RVA LGBTQ communities were on the scene. The gathering felt like a small Pride festival in itself, as counter-protesters chanted slogans like “Jesus was a bottom!” and “We’re here, we’re queer, nobody wants you here.”

Some counter-protesters voiced their problems with VCU’s reaction to advance notification of the WBC visit. Lily Hamilton of VCU’s Queer Action created a solidarity space away from the initial counterprotest, in which she critiqued both Westboro Baptist Church and VCU’s lack of transparency with the student body. She cited incidences in which VCU said WBC would have a spot reserved for them on campus, then later withdrew the statement.

VCU policy does allow for political groups, regardless of message, to reserve a space on campus to promote their agenda. The group may reserve space as little as five days in advance.

No violence occurred at the protest, though some protesters made loud use of profane language. However, the police presence was clearly intended to protect the WBC, who were highly outnumbered.

“It was really heartwarming to feel the support of the counter-protesters,” said Anthony Belotti. “We outnumbered them by so much. It definitely reminded me that Richmond is my home.”