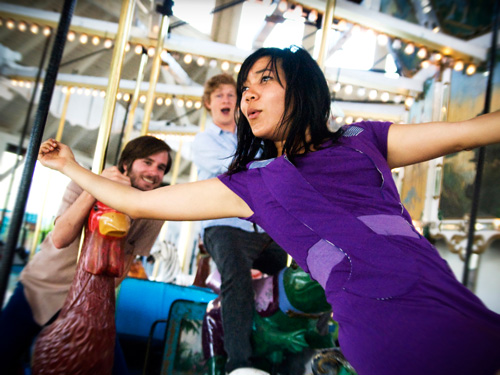 What were you up to last Saturday? Maybe you dropped by Plaza Bowl and checked out El Presidente? Perhaps you made new friends at your local watering hole? I personally descended to Shockoe Bottom to see an absolutely fantastic show that was grin inducing to say the least.

What were you up to last Saturday? Maybe you dropped by Plaza Bowl and checked out El Presidente? Perhaps you made new friends at your local watering hole? I personally descended to Shockoe Bottom to see an absolutely fantastic show that was grin inducing to say the least.

I tend to recommend a lot of music to my friends. While being guilty of the false promises of burned CD-Rs, one band I constantly bring up is Thao with the Get Down Stay Down. There is something very remarkable about seeing Thao Nguyen perform her songs live. Prior to this performance at the Canal Club, I had only seen her live at Café Gutenberg two years ago. The performance was enchanting and left everyone in the slim audience completely flabbergasted.

Now two years later and I was about to see her play once more. This time, it would be in support of her third full length Know Better Learn Faster. An album that displays the growing musical relationship between Nguyen and her rhythm section composed of Adam “The OK Bird” Thompson and Willis Thompson (no relation). It had already begun to garner praise from several media outlets, but Richmond is a strange town. I can name countless shows where bands that you would expect to receive amazing turnouts end up playing to the crashes of pint glasses and the noise of alternate activities. I didn’t want that to happen this time. Not to Thao with the Get Down Stay Down; a band that I adore. Thankfully, this would not be the case. 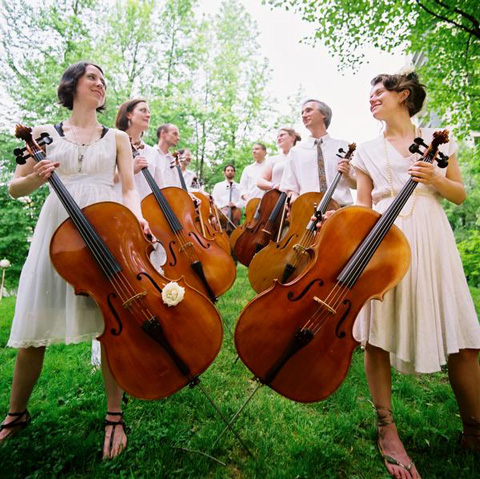 The first band of the evening was a group called the Portland Cello Project. The early murmurs I had heard regarding this cello quintet were all positive. As I watched from the side of the stage, the group played through a set of originals as well as orchestral interpretations of pop and metal songs alike. They played everything from Britney Spears to Outkast to Pantera. It was extremely entertaining. The one moment that stuck out to me though was their performance of an unreleased Elliott Smith song. Apparently, the group had the opportunity to record their newest release with one of Smith’s esteemed producer colleagues. The producer decided to give the Portland Cello Project one of Smith’s unreleased tunes. It was elegant and it helped showcase how transcendent Smith was as a songwriter. Also, how years after his death his impact still lingers on amongst musical communities nationally. 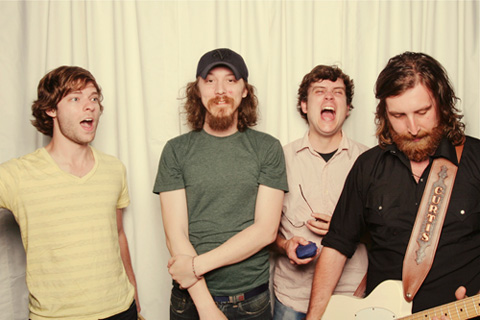 courtesy of Our Labor Of Love

David Shultz and the Skyline would soon follow. Shultz has been accompanying this tour as a solo act until a couple days prior when the Skyline met up with him. I unfortunately missed their CD Release show for Rain in to the Sea and that is a shame, because tonight they would shine. The best compliment I could give the group after their performance was that with the level of professionalism and seamlessness that their set was capable of maintaining, I felt as if I was watching a real band. By “real band,” I mean that if I were unfamiliar with this group and they came to my small town, I wouldn’t assume they were locals. I was watching my friends play a set as seasoned veterans of songwriting and it was awesome. Their set leaned heavy towards the last two records, but the most exciting moments were to hear new tracks like “Down The Road” and “Against Nothing” in a live atmosphere. You could also tell that Shultz felt great to be back home and that exuberance was on display throughout. If it weren’t for the next band, I would say Shultz and the Skyline had the potential of stealing the show. That would not be the case. 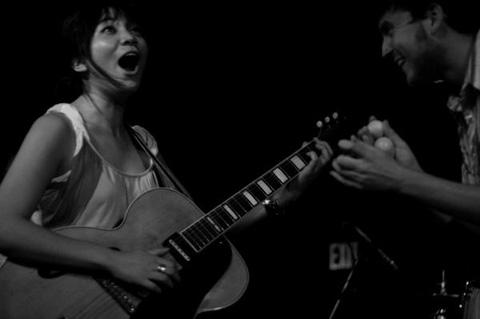 Thao with the Get Down Stay Down emerged on stage to “The Clap” and then burst into “Beat (Health, Life & Fire)” off of their first Kill Rock Stars release entitled We Brave Bee Stings and All. Nguyen’s stage presence was absolutely majestic. It was easy to tell that the audience had come for a good time in how they danced along and exchanged Nguyen’s positive vibe on stage by singing along to every single word. To put it simply, their set was incredibly inspiring. I had no idea what they would play, but they played everything I wanted to hear. Although, the inclusion of old school track “Tallymarks” would have put the show to a whole ‘nother level, the set didn’t need it. That song represents a different time in Nguyen’s musical career and right now it is about who she is now. Who she is with the Get Down Stay Down and that was this evening exemplified.

I had yet to give myself an opportunity to let the new record sink in, but this performance helped make it one of the main things on my mind now. One of the songs that really stuck out to me was “Body.” A tale of mistaken romance and the difficulties of understanding what one’s role in intimate encounters really stand for played out to a frantic beat that gave the song a prominent spot in Nguyen’s incredible songbook.

One of my other favorite song moments was “Violet” off of Bee Stings and All. Something about that tune had always struck me as sounding great live regardless of its minimal approach. I was absolutely right. It helps spotlight Nguyen’s dynamic vocal styling and her abilities as a guitarist. All in all, the song acts as a great testament to the caliber of songwriter that Nguyen is.

The band was constantly welcoming different guests from the other touring bands to come on stage and accompany them with their songs. It really put the tour into perspective in the sense that all of these bands were a musical family on the road to spread the word. By no means should that suggest that the band when by themselves couldn’t hold their own. The triumvirate of Nguyen and her two Thompsons were quite a force to reckon with live. I can only imagine that as they have made their trek across the country, they have made endless audiences fall in love with them.

I left the Canal Club with a grin going from ear to ear. As I lit a cigarette and blew the gentle smoke into the evening sky, I couldn’t wait to get back to the Fan and tell my friends about what I had just seen. This was a show I wish I could have taken everybody I knew to and have them become fans of the wonderful ensemble that is Thao with the Get Down Stay Down. I will wait in eager anticipation of your return to Richmond, Virginia.

Thao With The Get Down Stay Down “Body”

For more information about Thao With The Get Down Stay Down, please check out www.thaomusic.com

To check out an interview I conducted with Thao Nguyen back in July, please check out https://rvamag.com/articles/full/4164/yes-so-and-so-thao-nguyen

For more information about David Shultz and the Skyline, please check out www.davidshultzmusic.com

For more information about the Portland Cello Project, please check out www.portlandcelloproject.com