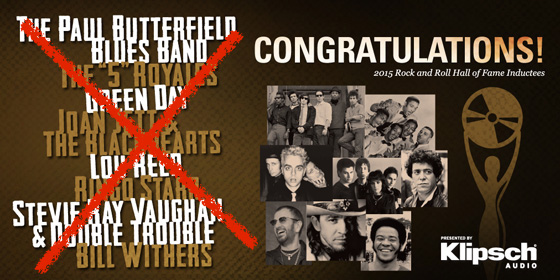 Every year, the Rock & Roll Hall of Fame Induction Class causes writers and fans alike to talk about how the

Every year, the Rock & Roll Hall of Fame Induction Class causes writers and fans alike to talk about how the honorees aren’t worthy.

This year seems exceedingly weak… two of the inductees are already in the Hall and don’t deserve a second induction, and at least one other is being inducted for the wrong band.

There are those who think the RaRHoF Should only have a few pristine acts in it. I am not one of those. I think the Hall should have a wide selection that reflects the breadth of the music and highlight the exceptional, the influential and the original.

By those standards, there are other, more worthy artists to be in included. Here is my list of replacement artists for the official selections.

1 – The easiest of these is replacing Ringo Starr. He’s in the Hall as a Beatle, as he should be, but what exactly did he as a solo artist that deserves entry?

I submit Steve Marriott to take his place. Steve is already inducted as a singer/guiatarist of the Small Faces/Faces. After he left that band, he formed Humble Pie, the self-proclaimed “World’s Finest Rock & Roll Band,” with Peter Frampton. His voice was powerful, crisp and singular. Beyond this, his vocal style, admired by his peers, was copied by Robert Plant and his mod fashion was copied by nearly everyone, including the Modfather himself, Paul Weller.

2 – The other repeat member is Lou Reed, already installed as a member of Velvet Underground. There is a much stronger argument for Lou Reed to be in the Hall as a solo artist, but for fairness sake, I think I’d like to see someone else in his stead.

Nick Cave is certainly deserving of this spot, but in the spirit of Lou Reed’s image as a dangerous rebel, it’s well past time to add Link Wray, inventor of the power chord, to the Hall of Fame.

Honestly, I can’t believe Link isn’t already there. While his contemporaries were modifying country or blues to create the first rock guitar licks, Link, fresh back from Korea, was punching holes in his amps to make them fuzzy and using distortion a full decade before Eddie Hazel and Jimi Hendrix. The song with which most people are familiar, “Rumble,” is an instrumental that was banned for sounding too dangerous and is now used copiously as a mood setter in film. His Chicken Run guitar plucking style is straight out of Appalachia, but can be heard on records through the decades. Pete Townshend is reported as saying that if he had never heard Link Wray, he’d have never picked up a guitar.

3 – There is a pretty strong argument for Joan Jett to be in the Hall of Fame, but Jett should be inducted with The Runaways, not the Blackhearts. The Runaways, although fully prepackaged, challenged the status quo and, like Link Wray did with “Rumble,” scared the hell out of the adults with “Cherry Bomb,” a song glorifying the power of their underage sexuality and hinting at incestuous urges. Meanwhile, The Blackhearts’ most famous song, “I Love Rock N’ Roll” is a banal crowdpleaser, tame enough for the cul-de-sac crowd.

Jett’s second highest charting song, “Crimson & Clover” is a Tommy James and the Shondells cover and so I recommend them to her spot. They had more than a dozen top 40 hits and 5 top 10 hits. James wrote most of their biggest hits, including “Sweet Cherry Wine” and “Crystal Blue Persuasion.” As for impact, we have Jett’s cover to reference, but also the amazing feat of having Billy Idol’s cover of James’ “Mony Mony” move into the #1 position in 1987, replacing Tiffany’s cover of the Shondells “I Think We’re Alone Now” at the top slot.

4 – Bill Withers penned and sang two of the most enduring soul classics of the early 1970’s, “Ain’t No Sunshine” and “Lean on Me.” Every year, the Hall picks a black soul or blues singer and neglects the full range of musical influence that people of color have to offer. That’s why I am recommending Nenah Cherry. Her performances ranged from punk (with the Slits) to R&B to experimental jazz to tribal electronic. In short, she encompasses much of the complete experience in one body of work.

5 – The 5 Royales are, I am sure, an amazing and influential group, but to be honest, I can’t tell you anything they did. Granted, they are being inducted in the “Early Influences” category, but we already filled that spot with Link Wray above.

This frees up a spot for WAR’s reggae and Latin informed South LA funk. WAR produced some of the most enduring and original hits of the early/mid 1970’s. “The Cisco Kid,” “Low Rider,” “Why Can’t We Be Friends” and “Spill the Wine” are multi-format mainstays that you know by heart. Their trippy, experimental first albums with ex-Animals frontman, Eric Burdon serve as monuments to the age. It’s a travesty that they are not already in the Hall.

6 – Green Day should maybe earn a spot, but not yet. Their replacements should actually be The Replacements. While the Clash are Green Day’s most obvious influence, its clear that The Replacements influenced them a great deal. The Replacements’ melodies, energy and loserdom lyrics were the very soul of college radio for two decades. Their influence on a new DIY crowd and the Minneapolis scene had an outsized effect on the alternative and grunge scene of the 1990’s.

7 – As a fan of Stevie Ray Vaughan and Double Trouble, I feel qualified to say he should not be in the Hall of Fame. SRV was an extreme talent and his guitar session with Albert King is a mesmerizing hour and a half well worth your time. But, he really marks the end of the traditional guitar blues structure as a viable rock product. In this spot, I’d put King Crimson.

Prog has had a rough go of it over at the Hall, but King Crimson’s 1969 debut, “In the Court of the Crimson King” is revelatory to most people on their first hearing and revolutionary as a rock album. Their rotating line-ups including Bill Bruford, Greg Lake, Tony Levin, Trey Gunn and Adrian Belew have actually served to keep King Crimson fresh, with their outputs from the early 80’s and early 90’s reflecting the best of their respective eras.

8 – There is little to criticize in adding the Paul Butterfield Blues Band to the Hall. But in the spirit of this article I will add the nearly unanimous choice for #1 most overlooked band by the Hall of Fame, Deep Purple.

Guitarist Richie Blackmore brought a classical sensibility and pure speed to the boogie groove that shows up time and again in future metal bands. Once considered the loudest band in the world, Deep Purple set the stage for the golden age of metal with hits you don’t even realize are deeply ingrained in your psyche. Elements of “Hush,” “Smoke on the Water,” “Space Trucking,” and “Highway Star” can be found in hundreds of later songs.

The Rock and Roll Hall of Fame induction ceremony happens this Saturday, April 18th, at the Public Hall in Cleveland, Ohio.

Find out more about this year’s event here.

My picks for next year’s honorees are: Primal Scream, Little Feat, NWA, A Tribe Called Quest, Nick Cave and Mariah Carey. For the “Early Influences” selection, they can add Patsy Cline.