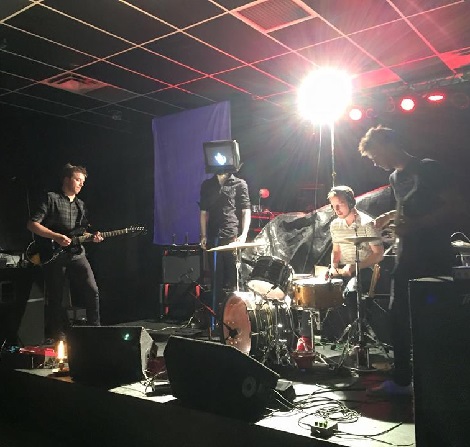 That’s what Medley, along with bandmates Drew Rollo and Warren Baker were going through last month when the new album they’d been recording for the last two years hit a snag.

The band went through a tumultuous year with their North Carolina-based indie label to get their new single “Outlier” released for their fans to no avail.

“We only mixed one song in that year and half,” said Medley.

Medley said the band was going for a big, very thick heavy sound, which wasn’t what they were getting back from the label.

“They were giving us crunchy, punk mixes, but we were hoping for something different,” he said. “They wanted a Richmond punk record and that’s not what we had in mind at all. We kept getting versions back from them we weren’t enjoying.”

Ultimately, after much back and forth, the band was forced to sever ties with the label in August and start from scratch.

With the stress of getting dropped, and a song that was supposed to drop hanging in the balance, Medley made a recent snap decision that would turn their luck around.

He reached out to Darren King, drummer of New Orleans-based alt-rock band MUTEMATH, one of his idols.

“I posted on his personal Instagram just like, ‘hey would you wanna work on our record?’ then I didn’t sign back into my personal one until I happened to be in Nashville a week later and he had private messaged me on Instagram and was like, ‘hey let’s talk’,” Medley said.

They had two meetings in a coffee shop and after that King decided he would produce half of Those Manic Seas’ new record.

Bassist Warren Baker said from here on out the band will have creative control over what they release, but besides King, they are working with John Moran over at Sound of Music Recording Studios for the new album.

Their new song “Outlier” dropped today as a standalone single, so check that out below!

The new full-length album is slated for some time in early 2016.

This will be the first single in a few years for the band, who came together just a few yearsago.

Those Manic Seas’ breakout single, “Headache/Heartache” was released in 2013, and was also a DIY project.

To promote the new song, Those Manic Seas will embark on a 660-day tour this month that will take them up and down the East Coast with some stops in the Midwest and even Canada. Their tour kicks off at The Camel Sept. 17.

Guitarist Drew Rollo said the new album is a little more dancey, but Medley said it’s also a bit darker at times too.

“We weren’t going for a specific sound, some of these songs date back to three or four years ago,” Medley said. “There’s a couple on there that that kind of have the same dancey-type qualities that “Headache/Heartache” has and there’s some darker ones that fit more with “That Manic Song.”

This marks the first major tour for the band, who are quitting their jobs and living in a van for the next few months.

And for those that don’t know, this band isn’t your typical live act either. The lead singer Kilroy, isn’t even a real person. Well, he is, but at their shows his face and vocals are projected through the screen of an old school tv that sits on top of a mannequin. Intrigued? You should be.

“When he’s going in and out of a venue people are wondering what’s going on,” said Medley. 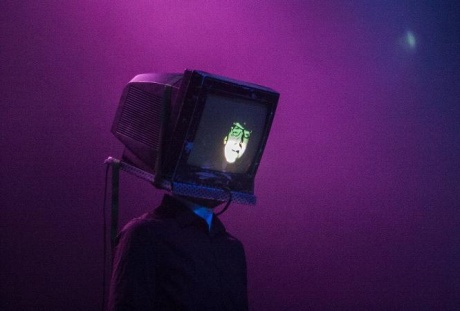 Kilroy, who’s been with the band since the beginning, is a big topic of conversation when Those Manic Seas take the stage.

“The whole bar will turn and stare at his face,” said Medley. “One of the shows in Charlottesville the dude (bartender) just stopped serving people and watched for like 30 or 40 seconds.”

“Some people kind of get mad, some people insist on getting an explanation out of us, but other people are like that’s s totally awesome or sometimes they’re like I don’t get it, but that was fucking cool,” he said.

Kilroy will have his own little space in the van when the band hits the road this weekend.

Those Manic Seas are wrapping up the finishing touches on the album now so look for more details on that from us in November.

In the meantime, make sure you go check out their show at The Camel this Thursday, Sept. 17 which will kick off their tour and download “Outlier” on their bandcamp, or iTunes, out today, Sept. 15.