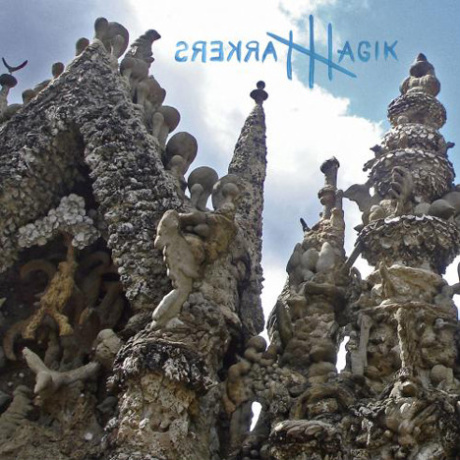 Album Reviews: Magik Markers, The Felice Brothers, The Love Language, The Pains of Being Pure at Heart

People really hate this band. The first time I saw them back in ’04 they were smashing bottles, threatening the audience, and frontwoman Elisa Ambrogio was abusing her guitar with everything but her hands.

The band’s last record, BOSS, was produced by Lee Ranaldo of Sonic Youth fame and saw the band moving into a more inspired drug-psych direction with mixed results. Balf Quarry is the cumulative sound of a band assuming command of its considerable power. The psych tinges have been embellished and the atonal wails that filled their earlier records are now layered and often delicate. Even Elysa’s voice, which used to consist primarily of chanting and disembodied howls, has morphed into a noir-punk Grace Slick style, with feedback loops and decaying guitars and piano swirling behind whatever disjointed narrative the song adopts.

Magik Markers have become a band to be feared rather than simply “watched.” Much of the press shrugged them off after they exhausted their initial shtick, but they’ve mutated at a furious pace and they’re rapidly rendering many of their peers obsolete. Don’t say I didn’t warn you. – Landis Wine

The Felice Brothers
Yonder is the Clock
Team Love

It isn’t very often that a band like the Felice Brothers comes around. Their songs feel torn from pages of the journals of Bob Dylan during the formative Basement Tapes-era. Somehow the band envisions the world around them from the comfort of the Catskill Mountains and successfully releases one of the best albums of 2009, Yonder is the Clock.

Their humble beginnings of backyard BBQ shows and the occasional subway tunnel have helped the band develop a unique sense of intimacy. On songs like “Cooperstown,” it acts as an acknowledgment of the older recordings of the band. Even on “Penn Station,” it feels like a recollection of spending nights on the bathroom floors of subways and never knowing what the next day may hold. It’s not foreign territory, but it harkens the days of the band’s earliest incarnations while remaining incredibly powerful. Also, the listener can’t help but smile when they hear such a beautifully harmonized refrain like “I died in Penn Station tonight, oh lord.” The best track is “Run Chicken Run” by far. The song plays out as the story of a coward on the run for his life and all the troubles and turmoil he encounters. The way Ian Felice inflects his voice around the melody is reserved with a hint of frenzy that doesn’t erupt until he hits one of the best choruses the band has conceived up to this point. With many of the tracks on the records as well as this tune, the band relies heavily on literary techniques that incorporate listing all of the details and objects surrounding the environment in question. It’s a very simple craft that is taught to any English major with a desire to write, which thankfully is now seeing a more pivotal appearance in songwriting thanks to bands like the Felice Brothers and numerous others.

This is one of those bands that seem to just be on the brink of continuous growth. They are only on their second major release (not including their self-released back catalog) and they continue to expand their legion of fans. If Yonder is the Clock is any indication of where the Felice Brothers may be headed, well then I will be waiting in eager anticipation. – Shannon Cleary

Listening to The Love Language’s self-titled debut, you might be inclined to think that the language of love is heavy on the heartbreak. But oh, does this band make that heartbreak sound beautiful. The lovelorn Raleigh-ans mope to their heart’s content in a world colored with dashes
of delicate piano, front-porch guitars, and legions of forlorn lyrics. Like any lovesick singer worth his salt, Stuart McLamb woefully warbles his way through nine angelically aching songs, both ballads and uptempo, full of crushing lines such as; “You shot me down just as I was startin’
to feel alive/little girls tell the biggest lies” (“Stars”), “Caught off-guard and left my heart in ruin” (“Sparxxx”), and my personal favorite, “I could have died in your arms/now I’m back at your feet” (“Two Rabbits”).

Sure, I’m a sucker for a sad song, but to make an album full of ‘em, it’s got to be pretty fine to win my heart. The Love Language is a pretty fine record, indeed. It’s an emotional mess, to be sure, but the songs are charming, and the rough feel of the production only enhances the acuteness of the pervasive sense of heartbreak. Undoubtedly, this will prove to be one of the best records 09 has to offer. —Megan Petty

What does it take to make the perfect pop album? And no, I’m not talking about that shitty, totally trite, soulless brand of pop American Idol inflicts on the nation every year, or the manufactured pop queens who, taken out of the safe confines of the studio, sound worse than a group of cats in heat. I refer instead to the classic sensibilities of pop: simple yet finely crafted songs that speak to you and just make you feel good. In truth, there might not be a true formula, but there is one thing that’s for certain: The Pains of Being Pure at Heart, in addition to having one of the best band names around these days, have come pretty darn close to indiepop perfection with their self-titled gem of a record. We’re talking adorable boy-backed-by-sweet-girl vocals (courtesy of Kip and Peggy), gleeful, taut instrumentation, and songs so catchy you’ll be hooked before the end of your first listen. These elements converge in a perfect storm of pop, and the results are exactly what a great pop record ought to be. The Pains of Being Pure at Heart is a razor-sharp album, but filled with warm fuzzies. I love this album, and as TPOBPAH so succinctly state, “this love is fucking right!” —Megan Petty