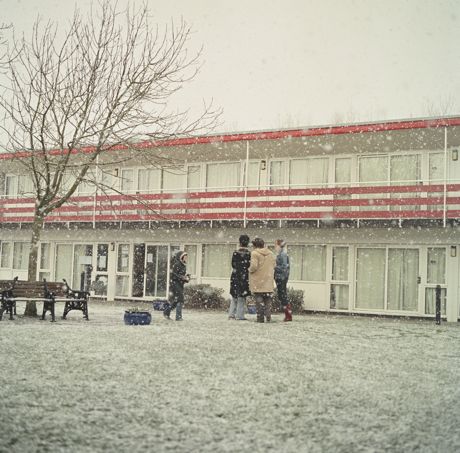 All Tomorrow’s Parties: A Conversation With Barry Hogan

Since it’s inception roughly a decade ago, All Tomorrow’s Parties has become the final word in music festivals, playing host to so many amazing bands that listing even a fraction of them would be a disservice to the diversity and quality of the acts chosen.

Since it’s inception roughly a decade ago, All Tomorrow’s Parties has become the final word in music festivals, playing host to so many amazing bands that listing even a fraction of them would be a disservice to the diversity and quality of the acts chosen. They’ve also sparked and encouraged the reunions of such giants as Slint, Pavement, Sleep, Raw Power-era Iggy & The Stooges, My Bloody Valentine, Polvo, and more still. Their festivals have strived to keep a communal environment in which bands and fans alike commune together on the grounds of resorts such as Butlin’s Holiday Centre in the UK and Kutsher’s, (located in the Catskills) in the US.

Warp Records recently released the film All Tomorrow’s Parties, which documents bits and pieces of the festival from over the past ten years, as well as containing some amazing performances from the likes of Belle And Sebastian, Grizzly Bear, Sonic Youth, Battles, Portishead, Daniel Johnston, Animal Collective, The Boredoms, Patti Smith, and many, many more.

I had the privilege to speak with festival founder Barry Hogan about the film, the label, and his personal highlights from the past ten years.

Landis Wine: From watching the film, I noticed that there was a lot of novelty associated with the initial festivals. As ATP has become an institution, how have you seen the UK festival scene change both with and around it?

Barry Hogan: When ATP started there weren’t any other alternative festivals. We were pioneers of bringing together decent music and presenting in a fashion that wasn’t dictated by cheap nasty lager companies or what was trendy in magazines. All you had then, was big festivals like Reading, V, Glastonbury, so we started ATP to offer an alternative. I think the reason its remained successful is the fact that its remained true to the concept of presenting a curators wish list on a live stage so that each line up is still exciting fans and bands who play at it. Nowadays anyone who has been to a gig at their local pub thinks they are a festival promoter and there are hundreds of events every year and most have one motive and that is to make money which is pretty sad really.

Is there any particular rhyme or reason to choosing curators for ATP?

All the curators we admire their music, art or acting or whatever they are creative for. And the whole idea is to find people who we think will reflect a creative wish list of music and film and creating a mixtape that is both interesting and exciting.

A good number of musical reunions have happened as a result of your events and a few have gone on to create some of the best output of their careers (the new Polvo album, In Prism, is one shining example). Has your view on band reunions changed throughout the years?

I think it depends on who the band is. I mean we have Pavement reuniting next year and they are curating our May edition and we are really excited by that. I agree on Polvo as that new LP is amazing and is probably their best yet.
I think though some bands reform and their creative peaks have already passed, that doesn’t apply to everyone, just some bands. Wire is a good example of that, killer LPs in the 70’s/80’s and now since Bruce Gilbert has departed they just aren’t the same.

The movie shows a lot of moments involving interactions between artists/fans as well as one another. What are some moments that have stood out to you as surreal musical/personal experiences throughout the years?

Yes, we always the next event to be better than the last. I guess when we run out of ideas we will give up!
I’d like to do an event in Japan as I love the music and culture from there and I think it would be great if we could make that work.

ATP Recordings has been increasing its activity as well, most notably with the new Fuck Buttons album Tarot Sport. Was the idea of releasing records/compilations there from the outset? How has it evolved?

Yes we started out just with compilations from the event to help promote the festival. We were fortunate that Bardo Pond were looking for help with their new record and asked us to release it. So that kinda kick started us signing bands and expanding our operation to a full time label. We are really happy with the acts on the label and I think bands like Fuck Buttons, Apse, Sleepy Sun, Deerhoof The Drones and Alexander Tucker make such exciting music and we are in good company having them record for us on ATPR.

What other film projects is ATP currently involved with? Do you see the film side developing along the same lines as the label?

No I don’t have any plans to start a film company. I am proud of what we have achieved with this movie but its a one off. I don’t think we will do a SAW and have ATP 6.

Does seeing the film in any way make you nostalgic for the early days of ATP?

I like looking back on all the great music we put on at those event. But the film reminds me how much I don’t like the old venue we operated at until 2006. It’s run by muppets and they never put a single penny into the place and its like an abandoned playground. I have heard they are knocking it down and turning it into a glitzy resort. Who knows if that will happen.