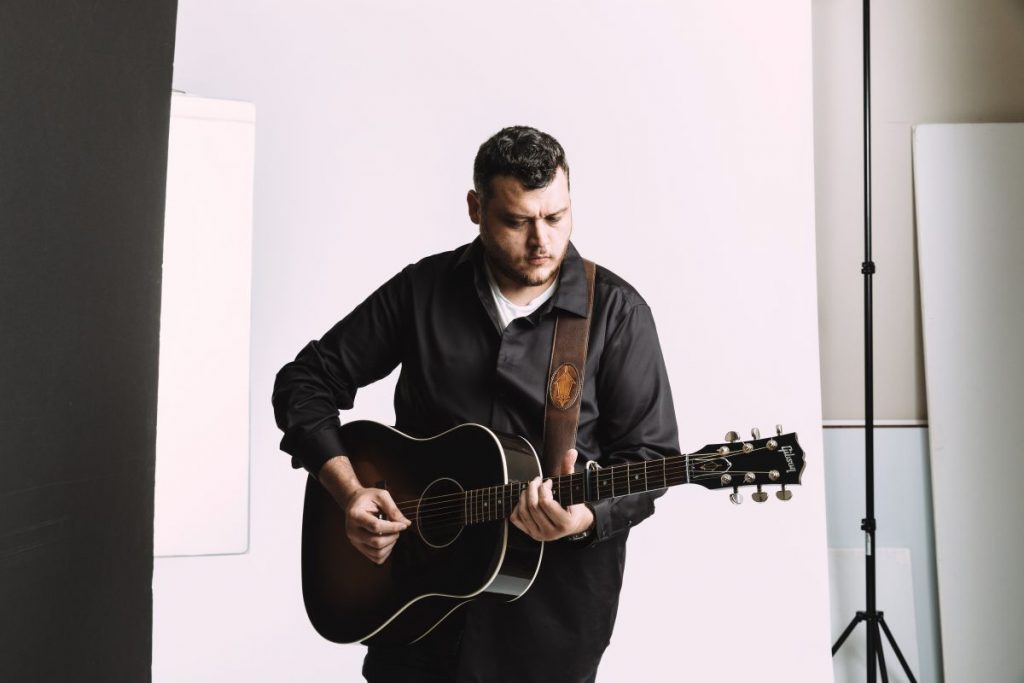 A few months ago while working on a music video for Richmond, VA based singer-songwriter Jonathan Facka and his song ‘The Tarmac‘, I got to know the guy and his music. RVA Magazine has covered him before but I found both interesting enough to ask for an interview. Dark, moody, self deprecating, but very funny and engaging at the same time; that is Jonathan, and this is our conversation.

If you get a moment check out his album, also called The Tarmac, on Spotify and the music video we created together HERE. Its all really good stuff.

Jonathan Facka: My name is Jonathan Facka. I’m a singer songwriter from Richmond, Virginia, born at MCV and in 2015 moved to Arizona — I was there for about a year and then I came back. I played clarinet in middle school, and then I transitioned to guitar class in high school. And I just liked it. I didn’t write a real serious song until I was about 27, surprisingly. Basically, a bunch of tragedy happened and I didn’t know I had anything to write about until that. Better late than never.

R. Anthony Harris: So your newest album is out, and has been out there. What is the inspiration for the album? There is a lot of emotion in there and you can tell there is tragedy, sadness, loss.

JF: Sure. Well, I wrote ‘The Tarmac’ and I had a collection of other songs, then it just turned out to be an aviation theme. I’m kind of afraid of flying on airplanes. So I met a guy who asked me to write a song for his wedding. It was called ‘The Terminal,’ another aviation theme, and the theme just started coming together.

Whenever you write an album, I think it’s important to tie them together in some way. Now, everyone’s focused on singles, but there’s an art to making an entire album, and I don’t want to see that go away. So I like making albums.

RAH: What is it about your fear of flying that influenced this album, or is it just fear in general?

JF: It’s just claustrophobia, this constant awareness that I’m alive, thinking about it. I walk around thinking about my breath — thinking, I could drop dead at any minute. That’s all I ever really think about, and it’s crazy. So just thinking about getting on a plane, I’m like, I’m out of control.

But yeah, the whole theme of ‘The Tarmac’ in general was once you leave the tarmac there’s no turning back, and sometimes you’re on a set path and there’s nothing you can really do. So you got to let Jesus take the wheel, you know? Did I answer the question? (laughs)

RAH: Well there’s a feeling of anxiety in ‘The Tarmac’ and having to make big decisions and maybe not being able to make them, or never making them. Are all the other songs reflective of that theme? How does the record move from the beginning to the end?

JF: So it starts off pretty fast paced, that’s how I started the first record, and it builds to a full band format by the second song — to show what the album has evolved to, because I didn’t have drums on my previous record. I introduced the cello this time around too. Then it moves into the terminal theme and I just kind of keep it going. Even in the first song, there’s a lyric that I’ve been locked in ‘tubes in the sky,’ it’s just a little nod to airplanes. It’s really loose, because I put the theme together late, but it works.

So it gets really sad at one point, then a little bit more hopeful, and I just kind of ended the album like The Sopranos, just black screen — just ended it in the middle of a phrase. I liked that ending. The audacity of that ending was incredible and I wanted to do something like that, because I thought it was impressive.

RAH: You had mentioned a number of Easter eggs in the album. We just talked about your love of Final Fantasy VII. What other Easter eggs are there? Do you want to disclose any of those?

JF: Okay, so really the only real Easter egg was in ‘Anew.’ I had the cello play the ‘Tifa’s Theme‘ behind the song in the beginning, because I like Final Fantasy so much.

As far as an obvious Easter egg, there was my father’s voicemails that I released to the public. I thought it would be really cool — because you know, (pause) he’s dead — to put his voice on my album and have him live on in that way. There’s something immortal about making music.

So I wanted to solidify his voice wherever, because he’s gone. (pause) My family didn’t know I had those. So, surprise! They were the voicemails that he had left me a couple days before he died. Those are real voicemails. Somebody asked me, what, did you just get some stock voicemails, or something like that? That’s really him. I had Google Voice and I logged into it last year, and there they were. I was like okay, I gotta send these to my producer, we got to put them on the album as a tribute to him. And the song is called ‘Stone.’ It’s about how I didn’t have enough money to buy him a headstone. So he was just laying in an unmarked grave.

He has one now.

RAH: I don’t know if you want me to ask you this, but I want to bring it up because I think it relates to the album. The story you told me about going to Atlantic City, where you had a little bit of cash…

JF: …and I don’t want to tell people that story. We will leave that off there, actually. I might have a song about Atlantic City, coming out on the next thing.

RAH: Okay, this will just be the teaser to that song.

JF: Sure, I mean, I’ve got some stories still left to tell. It’s just a dark… that’s a really dark story. I think this interview has already gotten kind of dark, you know.

RAH: No, I understand. That story deals a lot with the anxiety and uncertainty and decision making that flows through the album. But we can move on from that. What’s it like being a musician in Richmond?

JF: You know, Richmond has been evolving musically. For the longest time, they used to be like really big with metal. And then the jam bands came along, some ska. They still do, like, the party band thing. But I’m a singer-songwriter, and that didn’t really start being a thing until 2016, 2017 in my opinion — like singer songwriters really weren’t a thing [in Richmond]. But then Forbes Magazine called Richmond the ‘New Nashville.’ You’ll have to probably verify that but it’s what I heard [Editor’s note: Well, sorta, but not in so many words]. And yeah, it’s been nice, but there is still a ways to go for people like me getting the right crowds that will listen to you — they don’t want to just come drink and party and stuff.

I don’t know what affect the open mics had on the growing popularity of singer songwriters in the Richmond scene, but I love it. I love going to an open mic.

RAH: What do you hope people get from the album? To someone who listens to the album, what are you hoping to convey?

JF: I just wanted to make something that people maybe could relate to. Sometimes I feel like my problems might be pretty unique, but if you take a step back and you share your feelings you realize how much your feelings relate to other people, and that you’re not alone. So I think that’s why I’m making music in general. If there’s something I want someone to take from the album, it would probably be — I hope that you relate, in your own way, to my pain.

People ask me why I don’t like happy songs. If I’m listening to a song and someone’s talking about how they got a rose gold watch. I can’t afford that. So that makes me sad. You’re happy because you got a nice watch. But if I hear a guy talking about how sad he is, depending on the circumstance, I can go well at least I’m not that sad, but that makes me happy. So, just because I make sad music does not mean I’m not trying to make people happy. So I guess I want people to feel happy. (laughs)