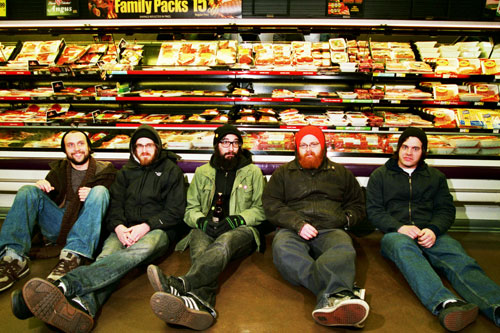 An Interview With Mouthbreather

A mouth breather, according to UrbanDictionary.com, is basically someone lacking the mental faculties to have learned the art of nasal respiration. Why would a band self-apply such an inauspicious title? We’re not sure, but the raucous and grinding punk of Richmond based Mouthbreather is anything but the vacant stare generally associated with the denizens of public thoroughfares and fast food lines.

A mouth breather, according to UrbanDictionary.com, is basically someone lacking the mental faculties to have learned the art of nasal respiration. Why would a band self-apply such an inauspicious title? We’re not sure, but the raucous and grinding punk of Richmond based Mouthbreather is anything but the vacant stare generally associated with the denizens of public thoroughfares and fast food lines.

R. Anthony Harris: The band is made up of former members of The Setup and the Wow, Owls! What was that conversation like after the two bands broke up?

Brandon Peck: There wasn’t too much conversation at first. Mostly John Hall, Tyler and I complained about how we didn’t have a band anymore, then we started talking about who we wanted to start a new one with. Originally we talked to John Martin about playing bass, and Tyler was going to try his hand at drums again, but the idea of having Gene Byard on drums was presented and everything sort of fell into place. I think we all had a lot of delusions about how things were going to play out for us, and some of our presumptions were a little misguided, but our hearts were in the right place, I think. We all wanted to, and thought we could, basically pick up where our previous bands had left off, but the truth was that we were back to square one, and it sucks starting a new band and figuring out the dynamic of working with new people. In the end, we came up with enough songs to play some shows, some of which we still play 3 years later.

We (John Hall and I) were talking about Wow, Owls! the other night and how it’s amazing that we got anything accomplished in the time that we were a band. We were all really naive, and somehow things managed to work out without us putting much effort into them. Being in Mouthbreather, and having actual goals and working to achieve them has certainly put things into perspective for a few of us.

Was there a conscious direction you wanted to go in after those bands?

John Hall and I have been playing guitar together now for about 6 years, and I’m not sure what you would call the type of music we write, but I’m not sure we know how to write anything else when we’re together. We all knew we wanted to be loud, and we wanted to be heavy, but not too heavy. In a weird way I think, and it’s true of most bands, I believe, that the music you create in a group is reliant upon the collective attitude and personality of the people making it. It’s hard to say what direction we were going for in the beginning, we just played around until something stuck and then kept trying to write better songs as time went by. The addition of Chris Brown on drums has only made us play faster and louder.

What are the perks of being in a band traveling the country? Do you think this will be even better on your first European tour next month?

Going on tour is sort of tough for bands at our level. We all love doing it, but it’s financially the silliest thing people our age could be doing. Money isn’t everything though, and we make certain provisions to be able to do so from time to time. Going to far away cities and playing shows is basically the only reason we keep doing this. Seeing old friends, making new ones, playing to people we don’t know, seeing bands we’ve never seen or heard of, and basically being on a vacation from home where the scenery changes every day are a few reasons I still love going on tour.

Having been to Europe before, I can say that without a doubt, our tour in Europe will trump every tour that we’ve been on. Not only will we be traveling through countries most or all of us have never been to, but the shows in Europe are a lot different than shows here. Over there, the whole attitude around music is completely different, a lot less apathetic. I feel like most shows in the U.S. are a social thing, and I’m guilty of it too, but in Europe people go to shows to see the bands and support the music community, not just to drink and get fucked up with their friends. We’re all very much looking forward to this tour.

Since you guys have essentially lived together in a van for weeks at a time maybe you can tell me who smells the worst from the band?

Probably John Martin. I can’t remember any specific instances, but I seem to remember something about his feet. We all get pretty raunchy gas from eating shitty food though. When Gene was still in the band, we were on a short tour and he was beefing pretty hard, and then he ate Cinnabon, and the van smelled like cinnamon doused turds for the next few hours.

I need a good tour story to tell my people.

The rest of the band likes to make fun of me for the time back in March when we played the Harvest of Hope fest in St. Augustine, Florida and I spent a good portion of the weekend without shoes on. I had long hair and a beard at the time and everyone was calling me a dirty hippie. That whole weekend was full of funny little stories though.

Probably the most eventful night was the first night. The bands had their own campground that was separate from the festgoers, and at some point a huge group of us decided to go to the other campground, which we had taken to calling Bartertown. We had picked up a huge bottle of Jameson’s before arriving and brought it with us. Upon arriving there was a gigantic drum circle going on which came to an abrupt pause, at which point Ken (Bridge and Tunnel’s roadie) loudly said “You gotta keep ’em separated”. No one really found that funny except us, so we took off in search of people to make friends with. We spent a good portion of the night annoying people who had gone to sleep and apologizing with whiskey. I apparently tried to fight someone, and somewhere along the way someone smoked pot with an Indian chief.

Who are your favorite bands in this city?

My personal favorite bands are Brainworms, Antlers, and The Catalyst. I was completely blown away by Field Day last time we played with them. As far as singer / songwriters in this city are concerned, Liza Kate, Josh Small, Zac Hryciak and the Jungle beat, Mermaid Skeletons and David Shultz and the Skyline all continue to blow me away.

Are you playing the Fest 8?

What sounds in nature does the band sound like?

A mix between a Tufted Titmouse and a Tsunami.

Mouthbreather “The Last Temptation of Crust”

Mouthbreather “Epic by Faith No More”