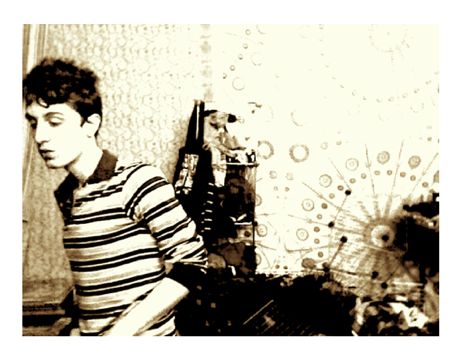 Archeology in Brooklyn: A Conversation With Beach Fossils

Dustin Payseur of Brooklyn based Beach Fossils has been having a pretty good year since their formation last summer. So far he’s played with Vivian Girls, Woods, Girls and Real Estate, had numerous mini-tours and looking forward for his debut to be released in February 2010 on both Woodsist and Captured Tracks.

Dustin Payseur of Brooklyn based Beach Fossils has been having a pretty good year since their formation last summer. So far he’s played with Vivian Girls, Woods, Girls and Real Estate, had numerous mini-tours and looking forward for his debut to be released in February 2010 on both Woodsist and Captured Tracks.

Payseur talked on the phone about his unexpected acclaim, his distaste with Brooklyn fads, and the fact that people actually smile and dance at his shows.

Alexander Chang: So how did Beach Fossils come into existence?

Dustin Payseur: “I was just recording all the songs on my own. It wasn’t even a band it was just me in my room working on songs and then I send it out to some labels and then heard back so I figured I should get a band together because I was already booking shows and I didn’t even have a band yet. So we started playing out like last summer.”

That’s crazy, so how long have you been playing music then?

I played since I was a kid. My parents were musicians and my dad has a studio and bought me a 4-track when I was a kid and I made a bunch of horrible recordings but I guess that’s what any kid would do if he had a 4-track recorder. For a long time I’ve gone through a lot of different sounds and a lot of different projects. I guess this is the only one that’s gotten any attention to it because I guess it’s more pop oriented.

So you’ve been playing a lot now since you’ve hit it off right?

We’ve been playing a lot and did a few mini tours. It’s been pretty good actually. Most of our shows are packed out and it’s really nice because I look out and people are dancing to it and seeing people actually smiling at a show which is like something that seems to never happen, like people are smiling when we play and it’s like woah. It’s a good feeling that I make people happy when I play and like sometimes people are like singing along and I’m like ‘I don’t even know how they know the words but whatever.

You said that you didn’t understand how they knew your lyrics and I can get that because you have a lot of vocal effects in your songs. What’s the reason behind that style?

Well the project that I was doing before I started Beach Fossils was really experimental and it was pretty much any instrument I could get my hands on and tons of analog effects and tons of weird songs that I could put so when I started Beach Fossils I was still in the mindset of doing pretty out there music like lots of sounds and noises. I don’t know, I’ve actually cleaned up the recordings a lot in newer mixes and I’ve taken a lot of vocal effects. I took out the tremble and just left the reverb, so all of those mixes that people heard before aren’t going on the album.

So then how important are your lyrics then?

They’re really important actually. I can write a few songs in a sitting and be proud of them but then it would take me like months to write lyrics or sometimes I can write them in one sitting, it depends on my mood really. I don’t know, I feel like the way that my stuff is recorded the lyrics are really muddy so you can’t really tell what I’m saying which in a way is unfortunate because I really put a lot into the lyrics. I’m hoping to get a little insert into the record with the lyrics in case anybody cares about what I’m saying.

Yeah it’s kind of unfortunate because it seems like it’s almost turned into a fad for people to record lo-fi and for people to do some sort of beach theme. My music doesn’t really have a beach theme, we just have ‘beach’ in the name. I don’t know. People just like to put their ideas on what I’m doing as an artist. People are saying that I’m writing about the beach and that I’m obsessed with summer, which I’m not, I actually kind of hate summer. It’s like really hot and sticky and not that great. There have just been so many things and like there’s this huge fad of summer time music that Beach Fossils has just been lumped in with which is unfortunate. And like the whole lo-fi thing, I’ve just been recording in that style since I was a kid. It’s not really something that I just started doing because I heard other people doing it; you know I just think it sounds warm.

I mean what do you particularly like about lo-fi?

I don’t know. I don’t like it anymore than I like hi-fi. I just don’t have access to a huge studio but if I did I probably still wouldn’t want it to be ultimately mastered. I mean when you go see a band live it’s pretty loud and that’s what it actually sounds like and it’s crushing to your ears. So when you listen to a recording in lo-fi it feels like that’s what the band actually sounds rather than if it’s cleaned up. When recordings are too clean it kind of feels like they lose something.”

So I’m getting that Beach Fossils is very personal to you and things with self-production seems to reflect that.

I find it a little hard to work together with other people sometimes. Sometimes I play with musicians and it just clicks like the people that I found to be in Beach Fossils are all songwriters and we get together and we all have the same influences and come from the same places. We know what works out but for the most part I really like to work alone because when I start a project I know exactly what I want and know how I want it to be. It’s really important as a songwriter to not give up to someone else. It’s kind of like if you’re a painter and you’re telling someone else to do a painting for you but you’re describing what it should look like instead of painting it yourself.