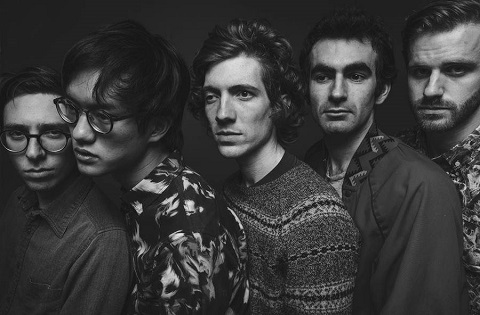 Last year’s Fall Line Fest was an unbelievable experience. Just from the sheer amount of talent in town that weekend, you were guaranteed to find a new band to fall in love with no matter what venue you happened to show up in. Richmond was lucky enough to have tons of incredible performances that weekend from bands like Death, Protomartyr, Rapsody, Seamonster, and more, but really, it seemed the big winner from Fall Line Fest 2014 was Brooklyn’s own Landlady.

If you were in the November Theatre for day one of the festival, you witnessed an amazing spectacle of intense musicality and wild showmanship from the group and if you weren’t there, chances are you heard about it throughout that weekend. In fact, we’re now almost a year removed from that weekend and people are still talking about just how great that Landlady show was, especially now as they’re ready to return to Richmond at The Camel tonight.

“That Fall Line Fest show was great on a bunch of levels,” Landlady frontman Adam Schatz remembered. “We had never been to town before and were at the very end of a long month of touring so I was feeling especially broken.” That month in particular had seen Landlady open for another band Schatz was in, the Philadelphia based Man Man, so it was essentially double duty on stage for an entire month. “It just slowly whittled me down,” Schatz continued. “I still felt like I was performing to the best of my abilities, but it just felt so rough when I got off stage. [Fall Line Fest] happened at the end of all that in the middle of some Hopscotch craziness. That whole stretch was just the culmination of one of the busiest months of my life. That show was also just so different. It was in this beautiful theatre and was one of those shows where it was empty when we walked out and full by the time we finished. It’s nice to feel like you’re winning people over. The fact that people are still talking about the show is really reassuring that it’s still possible to make and keep new fans just by doing your thing.”

Like seeing them live, chatting with Schatz was an adventure that became apparent pretty early on in our discussion. Instead of chatting about the new record or his way of keeping sane on the road, the conversation centered pretty much on music theory and its application within the band’s studio and live setting. Schatz actually holds a degree from NYU in jazz studies, something he sought out as an excuse to get into New York and meet new people. “I don’t think there was ever much of a plan to do something with the degree,” he revealed. “I think I had a pretty realistic awareness early on of how somewhat pointless a music degree is on paper. It could be good if you want to teach, but I’ve never really been interested in that profession. Actually, even though I went to jazz school, the plan was never to become a jazz musician. It was just something I was interested in at the time so it seemed to be the most relevant degree to get.”

Unsurprisingly, the jazz studies led to Schatz excelling in improvisation, but it also gave him a much deeper understanding of music theory and its practical applications to any future musical project. “When you’re studying music as a kid,” Schatz explained, “they push theory on you pretty early on. Classical theory really. That’s one of the things by design that you react negatively too. ‘This isn’t what I’m interested in so what’s the point?’ But eventually you learn that it’s all just different hemispheres of the same musical planet of songs and harmony. You can’t avoid it. You can run from it for a while and think you’re going to do something different, but it’s actually super valuable to know how things work and how anyone’s done anything through it. It all becomes invaluable.”

Schatz opened up a lot more on what the theory actually does for his writing process. “The theory works almost on a subconscious level. Rarely do I sit down and write a song thinking theoretically what’s going to happen. Instead, I’m sitting down at the piano and letting my ear react to ideas that comes out. The theory makes my reactions either good or bad and it’s even more useful when you have a good idea and want to know where to go to next. The more awareness you have of where the music can go, the easier it is to eventually land on something you think is a valuable place.”

From there, Schatz talked a lot more on what exactly he goes through when writing a song, after the theory helps shape the song. “Really, I want to surprise myself with the music I make,” he announced. “Usually the first step with the writing is thinking, ‘Is this a song I would like to listen to this?’ There’s no one I want to impress more than myself because I just try to hold an irresponsibly high standard to the music in the hope that it will then create the best possible song or album.”

It’s easy to think this yearning desire to surprise himself is what results in the band’s strong live performance, but Schatz admits it’s actually more a testament to the band’s strength as a whole. “The guys in the band are just so good. They all have a strong appreciation of improvised music like myself and I think that does give us our strengths because we’re able to react quickly and leave a lot of ideas open from night to night that makes each show better than the last.”

Schatz admitted that live shows resonating so strongly with audience is more of a deliberate attempt and further expatiated on what that all entailed. “Physically, I do think we’re all present and fun to watch. Having two drummers too is just a no-brainer as to whether or not a band is going to be fun to look at live. The live show’s never been very orchestrated either. It’s more that the arrangements are strong because the music is pretty active no matter what’s going on. When people react so strongly with our live show, a lot of it is actually in tune with what’s happening with our songs. There are so many dynamic shifts in our songs and sound and we want it to feel inclusive. We’re always thinking about how an audience is going to react and engage the music because without it, it just feels pointless. It’s never pandering though. It’s just something to always consider and it definitely informs a lot of the choices we make with our music.”

This approach and clarity about what their music is has really helped Landlady make such a name for themselves over the past few years. It’s making Schatz’ decision to focus on the band a lot easier, considering just how busy he kept himself before the band began. “I’ve done a lot of different things,” Schatz detailed, “especially when I first moved to New York. I just dove head first into any idea I wanted to pursue and I still feel that way. I think getting burnt out on one project is a real thing. I also think everyone in the band is three dimensional and we all have more than one thing we want to do. But Landlady is exciting for me right now and it’s building a lot. I want to do it right and that requires real attention. I’m really trying to focus on Landlady right now and writing this next record and getting everyone on the same page is the biggest priority.”

Even with focusing primarily on Landlady, Schatz is still able to do some side projects or gigs here or there. In fact, the morning we talked, he had just woken up from a quick nap he took after waking up early to be on The Today Show. The previous day, he was contacted to be a last minute replacement on saxophone for a backing band of an artist he was surprisingly unfamiliar with. “It was this pop singer Ingrid…um…Michaelson. Yeah, Ingrid Michaelson,” Schatz chuckled. “I actually had no idea who she was, but apparently she does quite well. It was a lot of fun though and I did know some people in her band so that was cool too. Really enjoyed it and the song we played.” It was a surprising gap in someone with a such strong musical awareness, but in typical fashion, he quickly gushed about wanting to dive more into her catalogue. You’d expect no less from someone who describes themselves as a “deep appreciator and student of all things music” and it’s this personality and direction that makes Schatz, and Landlady, a true force in the musical world and one you definitely need to keep an ear out for.

Landlady returns to Richmond tonight at The Camel alongside Buke & Gase and Andy C. Jeknins. For more information on the show and where to buy tickets, click here.

The Street Photographer: An Exclusive Q & A with Lamb of ...

In the shadow of an empty pedestal on Monument Avenue, the Lamb of God frontman spoke about the chaotic era we’re all living through,... READ MORE

The Street Photographer: An Exclusive Q & A with Lamb of ...

In the shadow of an empty pedestal on Monument Avenue, the Lamb of God frontman spoke about the chaotic era we’re all living through,... READ MORE