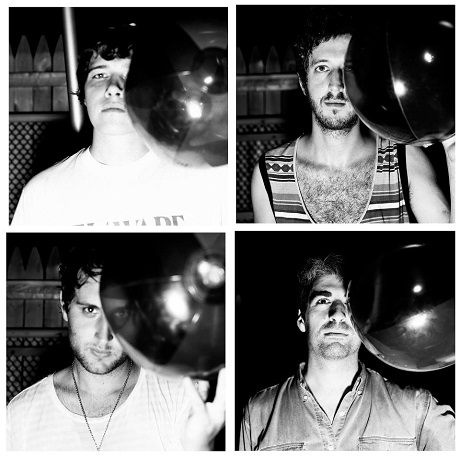 Successfully making the jump from lo-fi to lavish arrangements is a nearly impossible task.

Successfully making the jump from lo-fi to lavish arrangements is a nearly impossible task. Just look back on the last ten years of music and you’ll find case after case of a band with a simple and modest sound that garnered a big following only to lose them as they tried to achieve something bigger and better.

It’s a huge risk for any band to take, but for Brooklyn’s Small Black, it was a completely necessary one that’s paying off handsomely in 2015.

On the band’s latest record, Best Blues out now on Jagjaguwar, the band has created a simple yet sonically opulent world that blatantly strikes for emotionally epic moments while still maintain very tangible ties to their previous works. Talking with us about the album’s creation, singerJosh Kolenik very quickly touched down on the band’s lofty ambitions for what would become their junior effort. “We really wanted to challenge ourselves and try to make a record that can stand up to some of the best produced stuff out there, both new and old.”

To help acheive that high mark, the band really sought to create an environment where it was hard to tell what was natural and what was synthetic. The band looked to the past to 80s powerhouses like The Blue Nile and The Cure to help them reach the intended level, but Kolenik declared that it wasn’t the band’s attempt at an 80s album by any means. “Those bands made very lush and beautiful recording. It was stuff that did a great job of blending the power of drum machines and the feel of live drums. They hit that sweet spot between organic and synthetic elements that we like and that’s what we really strived for.”

To provide a musical balance to the synthetic side of Best Blues, the band relied more heavily on guitars than any time in the past as well as incorporated some newer instruments to really round out the sound and move past it being an album tied down to a singular genre. “The initial EP we did, we pretty much banned guitars from the whole record. We all grew up as guitar players and we’ve worked them more and more back in especially this time around. On this record, it was fun to bring the piano and keys in as well as some more horns. They all just add different and more interesting layers to the overall atmosphere.”

Rounding out Best Blues‘ pristine aesthetic are the wildly creative and much-discussed lyrics from Kolenik. While they do carry a theme of loss in relation to “getting older” as Kolenik says, the origins of the lyrics are not as simple as that. “The theme really came together throughout the process of making the record as opposed to something that came about when I first put pen to paper. I do a lot of stream-of-consciousness writing. I always think its important that the words sound good first and foremost because its a four person project. It’s not just me. It needs to serve the kind of music we have going.”

To help serve that music better and better explore the stream-of-consciousness style, Kolenik utilizes a bunch of writing techniques and word games, most notably some he learned of through acclaimed musician and producer Brian Eno. “I’ve read about a lot of his techniques like flipping words on top of themselves and they really work for me. I have an insane amount of notebooks that are just all full of phrases and titles and words that sound good. I end up collaging them all together into something and find new meaning in these unrelated thoughts that end up sitting next to each other on a page or within a song.”

It’s a very methodical and calculated approach to songwriting, but it’s also one Kolenik strives to keep as impulsive and random as possible. “I try really hard to make sure the initial impulse comes from my subconscious,” Kolenik remarked and the dreamy and wispy lyrics on Best Blues really showcase that. It’s certainly not a cut and dry method for Kolenik though as he proudly revealed that he’ll rewrite a song “probably a million times” just to make sure its right, but he always knows just when it is. “It’s very clear to me when the song is right. I just always know.” It this lyrical confidence that’s allowed Small Black to firmly establish their new sound and really ensure that the fan alienation other acts have encountered in the past won’t happen to them.

It’s hard to pick apart Small Black’s sonic maturity, but that doesn’t mean concert goers don’t feel a sense of trepidation as they wonder how the initial lo-fi sound that lured everyone in is going to match up with their new polished material. Kolenik admits it was something the band was really conscious off and has worked hard to pull off effectively. “We retooled some of the samples and some of the instrumentation to bring them all together, but some of the lo-fi charm from the old stuff is just a nice way to break up the more lush arrangements we have going on with the new one. It’s all about the balance. Equal light and dark. We like both of them and it’s fun to visit each throughout the course of a show.”

Fans packing in Strange Matter this Sunday will have a chance to see just what Small Black’s musical interpretation of the yin and the yang is as they will fully showcase their humble and endearing beginnings with their confident new arrangements. It’s a night where you’ll find yourself just as lost in the music as Kolenik in the band find themselves in his endlessly sprawling notebooks and the widespread appeal of this soft-spoken four piece will start to make complete sense.

For more information on the show and where to buy tickets, click here.