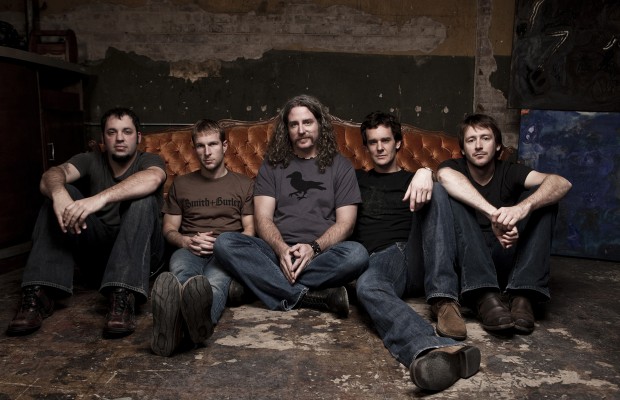 Fresh off the success of hosting the first-ever “Ragtime Carnival” this past weekend, Carbon Leaf is at it again with another major announcement to keep them beyond busy for the rest of 2014 and excite their huge fanbase. The veteran band, perhaps one of the most successful Richmond acts ever–and also one of the most underrated–announced plans on Wednesday to re-record their most successful album, Indian Summer, on the eve of its ten year anniversary via a crowdfunding campaign on the popular website Pledge Music.

Fresh off the success of hosting the first-ever “Ragtime Carnival” this past weekend, Carbon Leaf is at it again with another major announcement to keep them beyond busy for the rest of 2014 and excite their huge fanbase. The veteran band, perhaps one of the most successful Richmond acts ever–and also one of the most underrated–announced plans on Wednesday to re-record their most successful album, Indian Summer, on the eve of its ten year anniversary via a crowdfunding campaign on the popular website Pledge Music.

The album, which was the band’s true breakout, was their first on a major label in 2004 and also the first since the band won the American Music Awards New Music Award in 2001. The album features many of the band’s most popular songs, such as “Life Less Ordinary,” “What About Everything?,” and “Let Your Troubles Roll By,” as well as some of the best songs they’ve ever written, period; such as “One Prairie Outpost” and “Changeless.”

In a world where countless acts re-master their own records for re-release (sometimes multiple times), the term “re-recording” may be confusing. As the band laid out in their Pledge Music introduction, their former label, Vanguard Records, actually owns the master recordings for that record. Given the band’s split from the label in March 2010, it’s doubtful Vanguard would be willing to help out a band whose main reasons for leaving were that they assumed they could function better and more profitably without the label. Luckily for the band though, both of those assumptions seemed to be completely true. Since their split from the label, Carbon Leaf has stayed extremely busy, offering up two EPs in 2010, one live CD/DVD in 2011, and two full length albums last year. It was the second of those 2013 releases, Constellation Prize, that saw the band use Pledge Music for the first time to crowdfund their efforts. The project, which was undoubtedly a bold step for a band regardless of how loyal their fanbase is, was an overwhelming success across the board, becoming 100% funded within a month. When all was said and done, the project ended up raising 169% of the goal, a huge success that clearly opened the door for this project–which, in a lot of ways, is much more ambitious.

Re-recording an album isn’t something completely out of left field for the band. As fans who have taken the band’s invitation to chat with them after shows would know, it’s been discussed for years. In fact, in a Q&A from 2011’s live CD/DVD, Live, Acoustic…And In Cinemascope!, the band openly talked about how they’ve gone back and forth over re-recording albums such as 1999’s Ether-Electrified Porch Music. While you could look at the term “re-record” and just think it’s a way of re-mastering without the label’s help, it will be interesting to see how the songs turn out given that the band has an entirely new rhythm section since they first recorded Indian Summer. At the time, the band featured original drummer Scott Milstead and longtime bassist Jordan Medas. Milstead would leave the band in August, 2007 and Medas departed a year later. The duo were ultimately replaced by current members Jason Neal and Jon Markel on drums and bass respectively, a duo who were able to quickly familiarize themselves with the band and add their own personal style to Carbon Leaf’s already diverse sound. More so, many of these songs have been tweaked and changed for a live setting multiple times over the past decade, so it’d be interesting to see if any of that will show up on the final release.

So far, this project is off to a roaring start, raising 55% of the goal in the first two days alone. It helps that the band offers a crazy amount of options for anyone interested in helping out the project. The basic pledge is $15 for the download of the re-record version, as well as original demos from over a decade ago. From there, pledges go to $20, $25, $30, and above, for stuff like a physical CD, T-Shirt, special poster, signed memorabilia, and so on and so forth. The pledges do get interesting as you keep going up, though, including things like a “Thank You” mention on the album’s liner notes and a VIP Meet & Greet pass for the fall tour. And if you’re really so inclined, the band even offers pledges such as a Karaoke/Jam Session Day at their studio in the West End, or even a concert to play at your house. Of course, you need to have some deep pockets to get some of those, or just know enough people willing to chip in.

For fans of Carbon Leaf or for those just heavy into Richmond music, the opportunity is there for you to support a great band who’s been smart and talented enough to support themselves independently for the majority of their twenty year career. While it may just sound like a trip down memory lane, anyone who’s been to a Carbon Leaf concert knows the band excels at making even their oldest songs sound new and exciting. Arm them with a budget and a goal in mind, and who knows what they’ll do with Indian Summer?