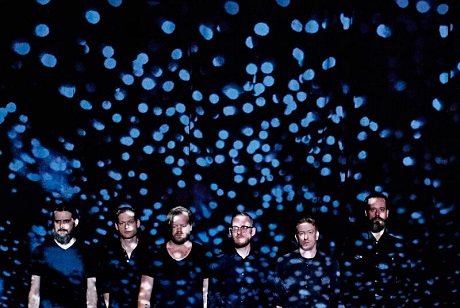 It’s daunting enough to follow-up on a breakthrough album without crumbling from the pressure and expectations, but doing it after the death of such an integral member? It’s almost impossible to comprehend, but on Dust & Disquiet, Caspian have seemingly done the impossible. They’ve managed to create a musical statement that ensures they will not be defined by the death of Friedrich or the towering success of Waking Season and they’ve done it without any gimmicks or reinventions. They’ve done it just by being who they were all along.

Chatting with guitarist Jonny Ashburn, it’s clear he hasn’t let this tragedy or pressure affect him in any way. There’s a subtle hint of somber in his voice when he describes the last three years, but it’s quickly forgotten as he excitedly babbles on about the new album’s creation. That enthusiasm is well-earned too as Dust & Disquiet is a brilliant follow-up in the sense that it doesn’t deviate too much from the winning formula of Waking Season, but it also doesn’t come off as a third-rate copy. Here, the arrangements are bolder and the soundscapes are much better defined, especially on sparse tracks like “Run Dry,” a song that serves as the focal point of the record.

To help escape the shadow of Waking Season, the band again looked to famed producer Matt Bayles who Ashburn described as “the absolute best you could look for in a producer.” Ashburn relayed how vital Bayles’ role in their new record was and it wasn’t just from the active contributions Bayles brought to the table. “Really, he knows what we’re going for and we’re able to communicate with him so well that it just makes everything flow perfectly. There are absolutely no surprises from that relationship and it’s a great way to allow a new record to come about.” While the band felt comfortable with Bayles behind the scenes, Ashburn admits that there was still a driving and urgent force behind Bayles production techniques. “I wouldn’t say he’s very strict, but he’s going to make you work for it. That perfect sound or tone. He’s got a great ear for tone and how different instruments are going to sit together and how to highlight that or maybe pull back on other sections. We have such a respect for that knowledge and his work ethic that it really drives us to give it our absolute best.”

Working with Bayles allowed the band to efficiently and strategically attack each song, but Ashburn revealed that the band’s pre-production work also allowed them a greater deal of focus once they entered the studio. “We recorded basically every song on the record at our practice space while we were writing them. It helped us work out any kinks that we could have possibly have and it made our time in the studio much more productive.” Still, Ashburn admitted that the band still got side-tracked at times. “We got sent a bunch of pedals from a company to try out. Five pedals showed up in the mail and it was a little distracting, but it also helped make the record what it was.”

The band experimented with the pedals as much as possible, even if it ended up being used in a completely different way. “There was one pedal I got that I couldn’t get a sound out of. I wanted it so bad because it models a sound that the band Failure got on the song ‘Heliotropic.’ That’s one of my favorite bands and I tried so hard to make it work and fit and I just couldn’t find the setting where it works for me. But it’s a fuzz pedal and it also worked with bass so I traded with [bassist] Jani [Zubkovs] and that pedal ended up being all over the record. Not for me like I originally intended though.” Ashburn was quick to stress how important it was to not get caught up in moments like this though. “You just can’t get too crazy. Whether it’s a new pedal or technique or a happy accident you’re trying to re-create, you have to try your best to keep a level head.”

All in all, the band spent a year working on Dust & Disquiet and it’s a year they spent completely and utterly devoted to the record. “I don’t think I’ve ever listened to that little amount of music over the course of a year. Really, all we were listening to was Caspian in order to make it the best we could.” Listening almost exclusively to Caspian’s style of music helped the band really draw influence from within as opposed to other artists which allowed the record to become truly unique and special, a fact Ashburn beamed with pride over. “I don’t know if we knew what kind of sound we really wanted and we definitely didn’t have a benchmark of another band or sound to go off of. Listening to it, it’s tough to say it sounds like this or that and I’m extremely proud of that fact. It’s just really hard to do. Dust & Disquiet has a very unique sound signature to it and we’re all so proud about that fact.”

Proud is just what Caspian should be too as they’ve overcome the heightened expectations and devastating tragedy with a much more focused and expansive sound that lets people know their previous success was no accident. Instead, it lets everyone listening know that Caspian’s brand of atmospheric post-rock is truly the vanguard of music today and one that’s strong enough to withstand anything fate throws their way.

Caspian plays The Camel in Richmond tonight with Circle Takes the Square opening the show. Doors are at 7 PM and tickets are $14. For more information on the show, click here.