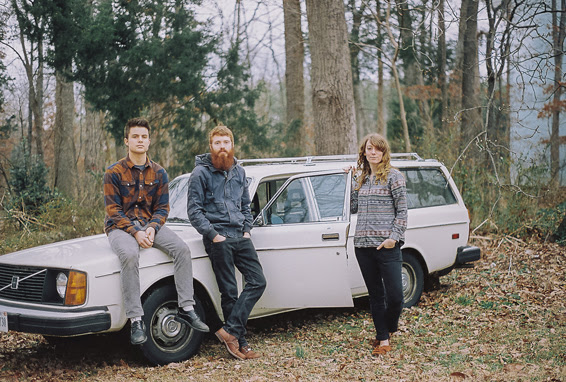 Comrades Call Down Fire On Powerful New Song; Safekeeper Out May 6

We don’t have occasion to talk about Comrades all that much, mainly because this RVA-based trio spend so much of their time away from home.

We don’t have occasion to talk about Comrades all that much, mainly because this RVA-based trio spend so much of their time away from home. The group played a total of 112 shows in 2013, which works out to about one show every three days–an even more impressive feat for a band whose drummer lives in Massachusetts and has to fly to Richmond in order for the band to practice. However, with the impending release of Comrades’ new album, Safekeeper, out May 6 on Blood & Ink Records, it’s become clear that some discussion of this hard-working local group is long overdue.

Formed several years ago by married couple Joe and Laura McElroy, who play guitar and bass, repsectively, Comrades have been playing their (mostly) instrumental music in any DIY spaces that will have them ever since. Drawing from their past experiences in hardcore bands with screamed vocals, the group combines heavy riffing with an epic, post-rock flavor that should appeal to fans of Isis, Sigur Ros, Russian Circles, and Envy, among others.

Comrades’ lack of lyrics is less a core feature of their band than something that evolved naturally, and on a case-by-case basis. In a video interview with Music To Reckon With, Laura McElroy explained that the band always considered the possibility of putting words to the songs, but that “music is a language as well, so you should also think about the music saying what you want to say, rather than just using words.” The songs on Safekeeper show that the band is not unwilling to sing when it seems appropriate, and the album features several songs highlighting Laura’s melodic vocals and drummer Ben Trussell’s harsher screaming. However, the vocals usually take up a relatively small portion of the songs on which they appear–those who remember the 2008 self-titled debut by defunct local quartet Antlers will see a similar effect at work on Comrades’ new album.

However, the track Comrades have released to preview Safekeeper, “Calling Down Fire (To Keep Warm),” is not one of the ones that features vocals. Rather than being an expansion of Comrades’ previous sound, “Calling Down Fire” serves more as a statement of purpose, in which the band gives listeners old and new a solid understanding of where they’re coming from. Featuring a complex middle section full of stop-start chugging and a brief, flashy guitar interlude, this song’s main point is heaviness, and Comrades prove that they don’t need vocals to have power. The song’s choppy final passage is an irresistible temptation to headbang, even with the occasional detours into 7/8 time. And at only two and a half minutes, “Calling Down Fire” will only make you that much more eager to hear this entire album. Listen below.

Comrades’ Safekeeper is currently available for preorder on four different colors of vinyl–pick your favorite, or just grab all four, at Blood & Ink’s online store HERE. Or, if you just want mp3s, place your preorder from Bandcamp HERE. Comrades are currently on tour (they’re in Minneapolis tonight), but keep an eye on their facebook page for upcoming RVA shows–it seems a safe bet to assume they’ll be playing here again before long.

Watch their spring 2013 interview with Music To Reckon With below: