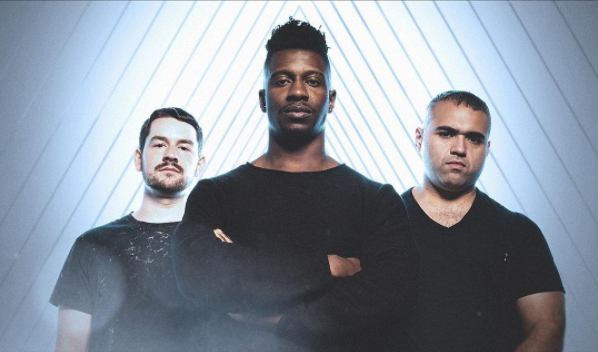 For instrumental prog metal group Animals As Leaders, both Weightless and The Joy of Motion were each steps up in terms of developing the band’s sound with progressive guitar techniques from the albums that came before.

For instrumental prog metal group Animals As Leaders, both Weightless and The Joy of Motion were each steps up in terms of developing the band’s sound with progressive guitar techniques from the albums that came before. Their latest effort, The Madness of Many, is a break from breaking ground and perhaps is them settling into the new space the’ve created for themselves. (And us!)

The ‘us’ I refer to there are the group of people that were perhaps amazed at some wild instrumental metal band we may have been shown a music video of that, despite showing the guitarist’s fingers, somehow didn’t help illustrate how someone could sound like that, and have since watched a DC/Bethesda based trio grow and create very exciting and typically fairly complex guitar-based music. (Two eight-string guitarists, Tosin Abasi and Javier Reyes, alongside the increasingly-spotlit drummer Matt Gartska.)

The Madness of Many is a different beast than the three records that precede it.

This time around there’s much more of a focus on groove, on the chord changes and on the group dynamic. TMOM’s arrival has Gartska edging ex-member Navene Koperweis for longest tenure at the kit, four years and two albums….and it shows. There’s a maturity to TMOM, particularly in the arrangements and I think Matt Gartska has much to do with this.

Often within this album are there moments when the guitars’ complexities are seemingly left out in front with less frequent backbeats, and with more attention-requiring syncopation than before. I think his influence has also helped refine the songs’ content as well as the arrangements themselves. I feel like Gartska has really helped integrate the way a lot of their rhythmic changes, both metric and tempo-related, take place.

I mean, I personally love the starkness of the first album and also Weightless, but what they’re doing now just sounds more musical, more organic. “Inner Assassins” is a great example of this, and with time and repeat listening prove the strength behind a more elegant muscle, particularly in the context of the three tracks that were available pre-release.

All of the solos here have a significantly higher level of feel and soul, as Tosin’s new wrangling vibrato and big exercised bends (all but absent on albums 1 and 2) do not go unnoticed. (See track; “Trascentience”) And again, to harp on the more pronounced musicality of TMOM, their guitar tones and overall sonic palette are now in a much more refined middleground of aggressive bite; slight distortion balance with their wonderfully emphasized mids.

It still retains the muscularity of their playing but it’s a more honed, leaner sound.

And speaking of sound, I don’t think Javier had his current signature ESP LTD for the recording of 2014’s The Joy of Motion, and Tosin is now on the second prototype of his third signature model and has also comfortably made a change to now be with Seymour-Duncan pickups, also featuring his name so there’s much to be said of the attention paid to their tones this go-round.

As the guys are always very much in precise control of their setups, usually with the digital Fractal AXE FX systems, clarity and articulation of pick/finger attack are at the constant forefront of their music’s sound, and the aesthetic of TMOM reminds us how their music is now trying to be heard.

Perhaps of note as well, is how it seems that Tosin is finding his writing and playing preference without a pick, more than with one. Much of how you’ll hear this is the increase in parts written using the thumping technique he’s adapted and pioneered for guitar (from a Victor Wooten bass technique). More than half the songs here have at least one thumping part, if not several.

Tosin just recently released a comprehensive instructional DVD almost entirely dedicated to this technique, and TMOM is a definite step towards a fuller integration of this into his matured playing. (Which isn’t to say that Cylindrical Sea or Cafo’s shredding are immature, mind you.)

But Animals As Leaders are not here without nods to their earlier work, deliberate or not… Cognitive Contortions’ first solo brings flashes of Inamorata from the debut album and in “Arithmophobia,” there’s a fingerplayed clean chord-y improv that comes in the same way as one does in “To Lead You To An Overwhelming Question from Weightless.”

I’ve also seen it said that “Arithmophobia” was written on the drums first, and then Javier and Tosin came up with parts to fit. EIther way, it’s a hell of an opening statement of polyrhythmic artistry.

Speaking of string-playing contemporaries, “The Glass Bridge” will certainly have people other than myself reminded of band friends CHON, with its playful arpeggiated/stop-start theme. And perhaps as it sits near the end of the album, the solo in this song is also one of the big shreddy highlights.

The final two tracks are where we get the taste of some acoustic guitars; 7 and/or 8 string nylons. “The Brain Dance” was the first song released and is arguably still one of the strongest, while “Apeirophobia”’s beautiful textures have a very strong kinship with the Passion, Grace & Fire era Al Di Meola sound.

It is presumed that on these last two songs, Javier has more of the compositional credit than he might have on other songs, and rightfully so. Both his and Tosin’s applications of the band’s sensibilities and aesthetic as the guitar players is very unique in an acoustic context, even more so than the typical soft/clean/acoustic interludes that metal records can so often have.

And I often wish they would do a bit more of it.

While I’m wishing, I’ll wish that they play “Private Visions” of the World at the 9:30 Club in December because I’d like to see them pull off the smiling, triumphant changes of pace in the first half to the steady stomp of the rest of the song in a live setting.

I’m also stoked because the song features a 9-string guitar part, whose sneak peek was provided out of context on Tosin’s Instagram account months ago. (The ending of Inner Assassins was/is also available via @tosinabasi some time ago, also outside of full song context, as was part of The Brain Dance.)

And to be selfish and wish once more, I will wish that more artists everywhere do continue to thoroughly apply themselves to their medium, to develop a unique and personal sophistication with their tools that enables to craft a more exercised expression, especially for a cause. Like if someone told you that guitar was dead. Which I may have heard around once or thrice. However; confronted with this submission yourself, you can just simply submit to them The Madness of Many.