Richmond five-piece outfit Spooky Cool has been one of the more elusive bands on the scene for the last few years. Up until recently, there was no social media or recordings to track them down, but determined fans caught them at their epic live shows, where they have carved out a name for themselves with their unique prog rock/psych pop math-y sound.

But back in October, the band released a video for the genre-defying, catchy song “Black Wine,” courtesy of the folks over at Good Day RVA. And now Spooky Cool is back with a video for their single “Strange Rooms,” which the group dropped in September.

It’s fun and upbeat and I’m mad at myself that I haven’t heard it until now. Spooky Cool worked with local film collective RVATrack to record their live music video and it looks like they had a good time rocking out.

Spooky Cool just kicked off their Winter Tour a few days ago which will take them from North Carolina to Tennesse, to Georiga, to Pennsylvania to promote their upcoming debut album, Every Thing Ever, slated to drop in June. Give this video a watch and be sure to catch Spooky Cool March 5 at their show at Strange Matter.

Last time we checked in with Richmond’s indie prog group Night Idea, the guys were releasing their first LP, Breathing Cold at The Broadberry. A year later, the quartet is back with a new album in tow and they are coming off the road to throw a release party at the very same venue on West Broad Street this Friday.

Unlike Breathing Cold, which shows a darker side to the band, the new album, Riverless, has the band experimenting with a wide range of sounds, spanning multiple genres.

“We are getting more comfortable with each other’s strengths as writers and players, and I think this is our most successful effort so far at harnessing a dynamic that bridges the large gaps between our musical selves and preferences,” said drummer Ethan Johnstone. “Also we had more fun than ever putting these songs together and making sense of it all. Having vastly different vibes from one song to the next made for fun opportunities to work on interesting ways to transition from one song to the next and try and keep it feeling organic. The way these songs came together was organic to us and we try to not to force anything if it doesn’t feel right.”

And while guitarist/keyboardist Reid LaPierre stressed that wasn’t their intention, he echoed Johnstone’s sentiments on Riverless.

“All of the members are into a lot of different genres,” he said. “Now that we’re all playing a larger hand in the writing process, I think its inevitable that we’re going to move through sonic styles from song to song.”

Some of the songs have been in the Night Idea vault for the last three or four years, but the band, which is rounded out by Carter Burton, (guitar/vocals), and Joey Anderson (bass), only started working with local sound genius Bryan Walthall of Stereo Image last year for this record.

“We did three or four pre-production sessions with Bryan in our old Hardywood Brewery practice space,” LaPierre said. “Each time, we would sit with him in a tiny room and record the session while Bryan gave us some suggestions on how to tweak the songs. On the final demo, I tracked all the overdubs we thought we would want over top of the mixes Bryan gave us. Violins, synths, acoustic guitars, and vocals filled up the mix nicely.”

The band tracked drums and bass in the upstairs of Backstage, at The Ward. Walthall then set up a mobile recording rig in Burton’s house for Night Idea to record the violins, keyboards, and guitars and having worked with the sound engineer in the past, it made for a smooth recording process.

“We were definitely more prepared to record these songs than previous releases,” Burton said.

Not only did they switch it up musically on the album, LaPierre said the writing on this album was much more of a collaborative effort than previous releases.

“We’ve been trying to take advantage of the fact that all members can hold their own on guitar,” he said. “It’s resulted in a few songs being built from chord progressions Joey wrote on guitar. One specific section was dictated to us by Ethan singing out the melodies he wanted to hear. Ethan also ended up writing the lyrics for multiple songs. All in all, this record shows a bit more of each member’s writing styles than our previous material.”

The nine-track album, which dropped online Oct. 13, starts out very Zeppelin-esque with the track “Canopy” and from there is a complex, eclectic mix of songs. Riverless tells a unique tale with each song revealing a different layer and creating visuals for the listener to envision the world Burton describes in his lyrics.

“Riverless follows a storyline and many of the lyrics are meant to create imagery that relates to the hopefully ‘otherwordly’ nature of some of the music,” Johnstone said.

Johnstone wrote a short story, which serves as an accompaniment to the beginning of the record, that will come with the vinyl copies of the album.

“It sets the scene for the events that unfold,” he said.

“Leaves shudder away as dark figures pass through the woods along a carved path. The figures show no sign of reflection on their faces as they move together. The only light coming forth under the canopy is emanated in occasional beams from luminescent creatures sulking within the tree line. The figures do not notice the lights. Their nearly endless pilgrimage stops in a clearing of woods; the forms file into the clearing, where a massive silver structure cuts upward out of the ground and arcs off to the south, out of sight.”

This is just an excerpt from the segment Night Idea’s drummer wrote to introduce Riverless, you can find the full story here to get an idea of the musical journey the band is trying to take you on.

In anticipation of their album release party this week, the group has been building momentum with track releases, a music video, and a tour.

“Gift Horse” is a hazy, psychedelic and almost trance-like track that the band released as a single in September. And this month, Night Idea collaborated with RVATrack to put out a live music video for their jazzy song “Let Me Out”.

For both Burton and Johnstone, there are a few songs on Riverless that hold a special place.

Although Night Idea toured earlier this year to promote the album and again last month, they will hit the road again Oct. 21 for about a week for a tour down south.

“I love being on the road and it was rewarding meeting a lot of cool nice people. It’s always reaffirming meeting welcoming new communities while traveling,” said Johnstone.

The band is releasing vinyls of Riverless through Gigantic Noise Records, and cassettes through Citrus City. They will also have CDs and the album is available on Spotify, Apple Music, and Bandcamp.

Be sure to catch Night Idea at their album release party this Fri., Oct. 20 at The Broadberry. Magnus Lush, Antiphons   , Navi, and Eric Slick will also be performing. $8 ADV $10 DOOR. Grab your tickets here.

“It’s going to be a banger. We’ve got a whole slew of friends and surprises!” Johnstone said.

Last time RVA Mag sat down for an in-depth interview with local indie/prog band Night Idea back in 2015, the four-piece were working on their debut LP, Breathing Cold which was released last March.

Since then, the band hasn’t wasted any time getting back in the studio and getting back out on the road. Night Idea just announced tour dates for this spring and plans to release a followup album, Riverless, this summer.

The tour kicked off March 3 in Charlottesvile which will run through May 6 taking the band heavily up and down the East Coast and all over the rest of the country. Check the full schedule below. Peep the Richmond dates this week and May 6 when they return home! 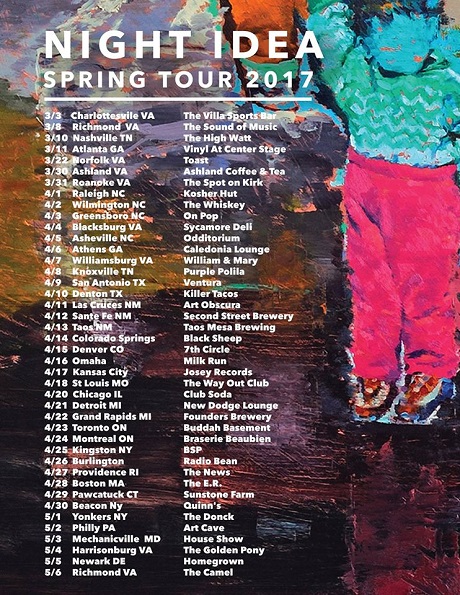 Keep an eye out on RVA Mag for a story on the band’s latest project!

I’ve had two guitar heroes for a little over five years. Before that period, I only had one: John McLaughlin.
END_OF_DOCUMENT_TOKEN_TO_BE_REPLACED

For instrumental prog metal group Animals As Leaders, both Weightless and The Joy of Motion were each steps up in terms of developing the band’s sound with progressive guitar techniques from the albums that came before.
END_OF_DOCUMENT_TOKEN_TO_BE_REPLACED

Temple Kelly, Greyson Gene, Jonathan Hale and Mike Caporuscio members make up the fun, laid back and tight-knit group Suneater that has been cranking out desert rock tunes for a few years now.