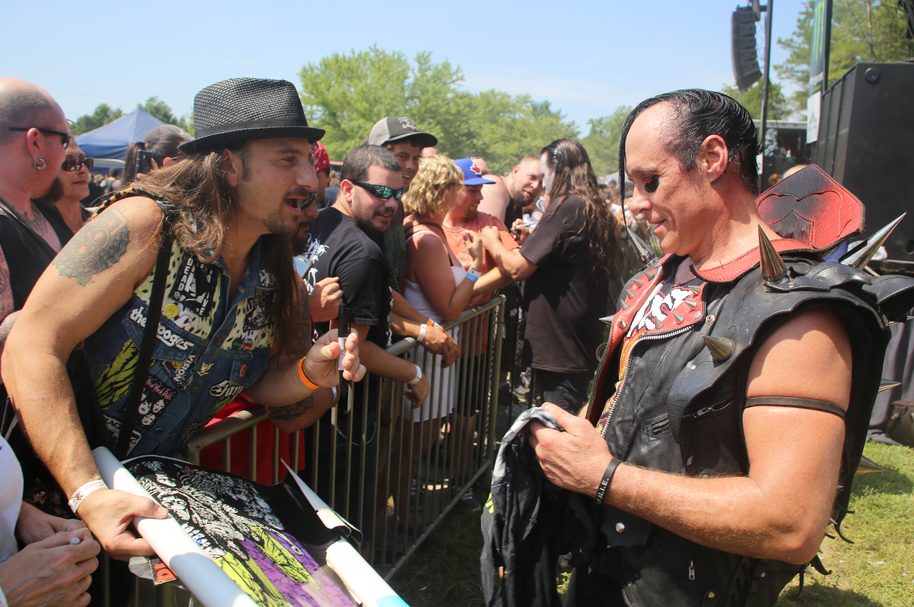 Jerry Only, the last core member of the horror-core creators The Misfits, might be the nicest man in punk rock.

Jerry Only, the last core member of the horror-core creators The Misfits, might be the nicest man in punk rock.

When we caught up with him after his GWAR-B-Q 2014 show, he was meeting fans waiting after his set. He signed autographs, took selfies, and spoke with almost every person who wanted to meet the legend.

Despite the heat, Only (at 55) was fully clad in leather and makeup. For a man who fronts a band which sings about murder, rape, and being an outcast, you almost never see him frown.

Have a look at a bit of their GWAR-B-Q set below:

Below is the transcript (and video!) of our brief interview with Only. With his family back stage, we didn’t want to take too much of his time, but he shared some neat insight into the future of The Misfits, and what really matters to him these days: family.

How’d You guys feel about your set?

Jerry Only: It was smooth, my little girl was crying waiting for her sister, so I was more focused on that. Sometimes it helps not to be too ‘on it,’ but I had a good time.

Do you always bring your family on tour with you?

Yea, my nephew is my drum tech. My son plays guitar up there next to me. That’s my literal girl, and that’s my grand daughter and my son-in-law.

Yea they were on their way to NC for a vacation for a week, and we’re down here hang with the guys and to show support – Dave was a good friend of mine and it was sad. We want to the band to keep going. We had problems with our band back in the days, so hopefully everyone’s having a good time.

Good energy during the show

I thought it was good, What did you think?

It was great – everyone loves you here in Richmond

It’s really nice – we try and be positive energy for the kids. We try and work out, we’re straight edge, we’re keeping things good. We got jobs at home. We don’t think we’re rock stars. People think in the beginning ‘oh, i wanna be a rock star!’ but when you are one, you go “I just wanna be normal”… like my mom says “why can’t you just be normal?!”

You guys connect really well with the crowd. Do you find a lot of joy just meeting the fans?

Yea, all the time… I’m gonna go hang out with everybody here and watch the GWAR show and kick back.

You were close with Dave Brockie, got a good Dave story?

Well, Dave was out of his mind – that was the main thing about him. He was very creative and very constructive, thus destroying everything around him when he got it together. Dave’s people are really good friends, and they’re the hardest working band I ever saw – we toured with them lil 3 times – we’d pull up to a venue at 6 AM and start cleaning their gear and bleaching their outfits. I was real impressed with that. We had guys who were sleeping till noon, and I said, this is the kind of band you gotta be – You gotta hit the ground running. And that;s how we are now. We’re bringing new blood in, and got my son on stage with me. We’re trying to keep growing – we’re shooting for 50 years, and we’ll see. We hope we’re the first band to shoot for 100… it’s a good band, its good energy.