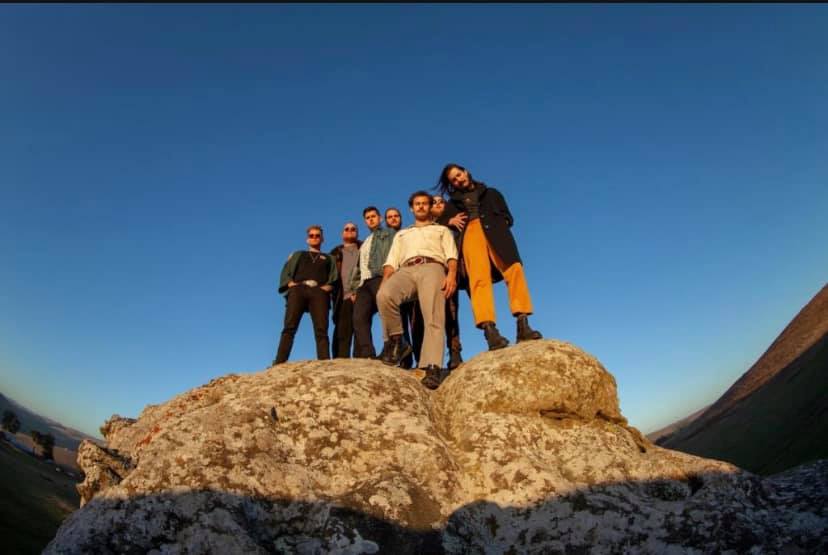 Brooklyn’s EVOLFO come to The Camel on Wednesday, September 8 with a heavy dose of psych for the Richmond music heads. To whet your appetite for the musical festivities, Kieran Cleary gives us a guided tour of their new album, Site Out Of Mind.

Artistic Brooklyn rockers EVOLFO make a return to the Camel this Wednesday night. EVOLFO formed in Boston in 2011, bringing together members from the East and West coasts, as well as the Midwest. These days, they are based in Brooklyn and play “garage soul with the force of a devil’s belly-laugh” under the leadership of Matt Gibbs, the founder, guitarist and vocalist. Their name derives from Shakespeare, but it’s not actually a word, so that it’s meaning can constantly be redefined by it’s participants. Their live shows have been called raucous bacchanalia. If you’ve been through the desert on a horse with no name, you might enjoy a play-through of Site Out of Mind, the 7-piece band’s sophomore album, released in June through New York-based label Royal Potato Family.

Track 1, “Give Me Time,” is richly layered with tinny reverb vocals, the jangle of gypsy folk, roundabout trance melodies of a sun-kissed variety of psych rock, and even a little jazz. Shake it all up in the tin can amplifier, close your eyes and roll imaginary credits of a grainy surf movie, then turn the lights up on a wilderness beach in India. After several evolutions, the rhythm draws layers of sound down to a simple stamp stamp, and I find myself trotting exhaustedly down the silk road amidst a visual overload of colorful fabrics and jangling medallions, dodging the feet of a herd of stamping… CAMELS? An inspiring coincidence. I don’t want to miss what could be a very special melding of music and atmosphere.

Texture, improvisation, mixing, looking at death as an inspiration, and the paranormal are the strong points and inspirations for Site Out of Mind. Material developed in live performances, tiny attic studio sessions, and extra-tour-estrial field trips forms this work, and with many references to sleeplessness and failures, the music expresses exhaustion through the stifling reverb.

Track 2, “Strange Lights,” picks up the pace with a distinctively British pop-punk flavor. The lyrics are straightforward and repetitive, the story a little indecipherable and obscure — like a song about Jimmy Jazz or whoever. But over all this, the band’s signature sound is kind of oppressive and heavy, crossing my signals. The Punji-like horns make me think of mirages, and sometimes sound like urban sirens. The band is proud of their work in their tiny attic because the close quarters helped them interact, but perhaps it mirrored the feeling their music evokes.

Track 3, “Zuma Loop,” sounds blasé and kind of forcibly even-keeled. Ascending arpeggios level off and hold. “Tides rise, so be at ease,” the singer’s voice wavers over a forming rhythm.

With a touch of blues and soul, the acoustic notes now shine with the same tinny feel of the vocals, leaving me thinking of Mac DeMarco. Track 4, “Blossom in Void,” takes a turn, and then keeps turning, fluid and transformative. I practice letting things go as the band moves evenly through several musical themes.

My favorite song, Track 5, “Drying Out Your Eyes,” sends a hint of Appalachia in its guitar intro, which quickly picks up into a rousing classic riff like CCR would do. But it quickly departs as the strange vocals have all the manner of a classic CCR song in the rhythm and delivery, and would-be Jethro Tull sound, slashed by a piercing bass line, a truly paranormal element and such strong vocal distortion even cut into its melody, melting its peaks. Simultaneous distortions don’t stop the song from settling into a jam rhythm. I really enjoyed this one!

The following tracks depart from this point to a much more rock-and-roll place. They sound like the B side. They are a little lighter in texture, and more distant. On the journey of the album, they have departed a little. I think critics are right to make connections between EVOLFO’s sound and, like, Rush. But then again, on the next song, “Let Go,” they return to a very indie, modern sound and touch on velvety lounge and luxury. Back to the gritty, pre-metal, story rock, and then, the album makes a quick but much quieter, lighter return to sirens, to India, to jazz, on Track 11, “White Foam.”

EVOLFO comes to The Camel tonight, Wednesday September 8, from summer performances in Portland — where I think one might find some roots of their sound — and Queens. Now, like cooler temperatures, the band will sweep through our region with a 3-day run that also brings them to Raleigh’s Pour House and Norfolk’s LAVA mini-fest. But the best place for Richmond music fans to see them is at The Camel tonight, so grab tickets, which are $8, at The Camel’s website. Bring a mask and your vax card (or a recent negative COVID test)!