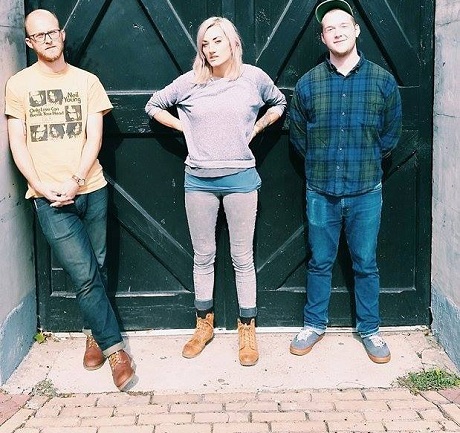 Although just forming this year, the trio is no stranger to the punk rock scene here. Lead singer and guitarist Adrienne Shurte melted faces in her former band Fire Bison before it went on hiatus in 2012.

Her pure rock sound with that punk edge, plus two females at the helm of Fire Bison made for an epic mix. She was also the only female in local rock band First Creature.

Since Fire Bison’s disbanding, Shurte took a little time off, but for the last year, has toiled away writing material for Magnus Lush’s new five-track demo which they just released via their bandcamp.

The band recorded it with longtime sound engineer Bryan Walthall and it’s a perfect blend of post-punk and rock. A little bit of that fuzzy 90s garage sound we love is thrown in there as well.

“Sometimes I don’t realize how throw-backy it is, I don’t know what im writing I just write these parts and Im like, ‘ok these things make sense’,” said Shurte. “I’d say it’s definitely post-punk, definitely got that rock and roll stuff, they’re more elements of grunginess than I would have ever intended, but they’re there, I can’t help it.”

The ’90s vibe really influenced her music obviously, but Shurte also takes cues from the likes of the one and only Patti Smith.

“She’s at my heart all the time,” Shurte said.

The punk singer has also been into Nick Cave for the past 10 or 15 years which she said influenced her writing.

Shurte has been playing with drummer Christian Monroe, whom she met through a friend, since April and bassist Kyle Pederson just joined in September after he and Shurte struck up a conversation at a bar. The trio have been practicing consistently ever since.

Speaking of bars, that’s where most of Shurte’s inspiration for writing songs has spawned. She gets ideas from one of the greatest past times, especially for certain parts of RVA: people watching.

“I am guilty of watching people and watching body language and assuming stories about people when I go out,” she said. “I like to go bars and like, hang back and watch people’s interactions, I think there’s a lot of to be said about the way people interact with each other…these like untold stories…”

The song “Flannels” off the demo, a short very grunge heavy ’90s feel jam, is a prime example of that.

“I’d been drinking a little bit…I go to this show and I saw this girl and she was standing by herself and she looked so miserable and this person came up and started talking to her and you could tell that both of them were not interested in the conversation they were just doing the thing they have to do to socialize,” she said. “The guy walked away, you could tell he was never interested…there was something about her that was really awesome.”

Shurte’s voice is haunting in a way, but still packs a punch. It slices through you and gets your blood flowing. Her skills on the guitar make you give the band a second listen and she’s got the songwriting chops to back it up.

Songs like “The Flow” and “Dark Star” are two of my favorites off the demo. I can’t wait to hear more from this young band.

And fans of their new music don’t have to wait to hear them in action, because Magnus Lush will play their first show at Gallery5 tonight, Nov. 6 alongside Shmu, Meth Dad and Imaginary Sons.

Shurte said the band also has a couple of house shows lined up in the near future, a show on Paul Ivey’s WRIR show “Time is Tight” on Nov. 20, and Banditos on Jan. 3.