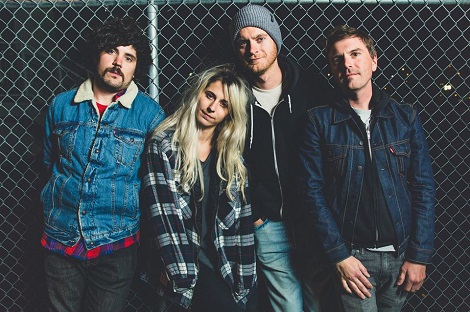 For fans of the late 80’s/early 90’s alt-rock scene, the past two years has been especially kind to you with band after band debuting their own take on that now classic sound.

For fans of the late 80’s/early 90’s alt-rock scene, the past two years has been especially kind to you with band after band debuting their own take on that now classic sound.

Nashville’s Bully is just one of the hundreds of bands popping up and strengthened by their 2014 self-titled EP and debut album this year, they’ve firmly established themselves as one of the leading bands in the alternative revival currently underway. It’s not just the lapsed 120 Minutes fanbase that’s latching on to Bully either–the band is resonating with people across the musical spectrum due to the sheer magnitude of their simple compositions featuring explosive instrumentation, biting lyrics, and mesmerizing vocals.

Feels Like is the name of Bully’s debut record and it surely feels like it was unearthed in a time capsule from the year 1992 and then polished off with 2015 production. To make such a gritty record simultaneously feel modern and classic, you need someone who has a deep and earnest appreciation of the genre, but is also equipped with enough knowledge to truly make it fit into 2015’s sonic landscape. Bully’s mastermind Alicia Bognanno is just that: an intelligent audiophile who will talk your ear off about recording techniques before seamlessly switching to gushing over Kim Deal. Before forming Bully in 2013, Bognanno cut her teeth in the music industry behind the scenes as an audio engineer where she learned about the ins and outs of making a record and got her first chance to really enter the fast-paced industry.

“When I first got introduced to audio engineering my last couple of years in high school, one of the reasons I really grabbed onto it was because it seemed like my first opportunity to get involved,” she explained. Before that, she had found herself involved heavily in choir while also trying to start bands at every turn. At the time, Bognanno hadn’t quite fell in love with the alt-rock scene that would come to influence her so greatly. As she put it, “I didn’t have a cool, older brother to pass me down indie records” and she admits she remembered liking whatever was on the radio from Ace Of Base to Celine Dion. While she had been exposed to some music on the opposite side of the musical spectrum, Bognanno didn’t fully immerse herself in the scene until she arrived at college in Tennessee and it was there that she began to really fall in love with what music could offer.

From there, Bognanno’s love only grew as she discovered bands like The Replacements, Butthole Surfers, Silkworm, and naturally The Breeders. “I can still turn them on now and not be sick of them despite listening to them over and over,” she gushed. Jumping from band to band at the time, Bognanno found her voice, though it wouldn’t years later until she was giving a chance to fully showcase it. When the chance finally arose though, what came out was not a choir girl’s take on rock and roll, instead a vocal onslaught that tries it’s hardest to one-up the vocal snark of female grunge singers.

Listening to Feels Like, it’s this singing style that gives you first glimpse of Bully’s greatness as the bombastic track “I Remember” rings in with Bognanno’s melodic shrieking. It’s a trait that wasn’t evident as much on their previous EP and acclaimed single “Milkman,” but one that’s giving Bully an identity this year and allowed fans to make even bolder comparisons to the 90s rock scene.

“[The screaming] just kind of evolved with Bully songs because on the earlier stuff like first EP we put out, there’s not a lot of it. It just kind of happened with the songwriting. It first happened with ‘Trying’ and then I just really liked it. Being able to just scream and let loose – it carried on from there. I’m not a conventionally great singer by any means. A Christina Aguilera song, I couldn’t nail it at all. My voice doesn’t sing well in that style so I had to find something else. It came pretty natural to me, but there’s days when it doesn’t. Days when it just doesn’t click and I just have to work through it so I’m still learning.”

“I definitely had things on my list that I knew I needed to do beforehand, before even coming into the studio. If I didn’t, it would have only been more stressful much like some sessions I’ve seen before. For the most part, I wanted to have everything written out and have an idea of how I wanted it to sound in the mix. I had planned out the microphones I was going to use on everything, all my preamps and EQ and stuff like that too. It was all things I took away from other sessions in order to make ours smoother. It was really beneficial. When you’re sitting in and watching bands make a record, everybody does it differently, but it’s nice to see what could help you when it’s your turn.”

Having that game plan was invaluable to Bognanno even if she admits it was hard to stick to at times. “I Remember,” for instance, saw Bognanno finishing while in the studio, something she had tried her best to avoid in order to truly maximize their time in the studio. What made it even harder to stick to her game plan was just her attempts to stay levelheaded while being offered the opportunity to record in a studio, let alone Chicago’s Electrical Audio. With the humble process of their first EP, it was something that really left Bognanno awestruck from the moment they stepped in until the moment they left.

“The whole thing is almost hard to grasp because I felt like we were so lucky to even have that opportunity to record somewhere like Electrical Audio. It was really surreal the whole time we were there. I remember the last day, we were there and cleaning up and I was thinking over and over, ‘This is crazy – no way this happened.’ It was just really awesome and a great learning experience and it’s always great to work with new gear that you don’t normally have access to and record at a place that allows you to track them as you want to. When we don’t have a budget, it’s kind of just me throwing it together and mixing it on Pro Tools on my computer and it’s not my favorite way to do it. I just don’t work that way so it was really helped to get to do it at Electrical Audio. It was just amazing.”

All of this makes Feels Like a completely unique album, even if is a take on a familiar sound. With a calculated and educated approach to recording, Bully’s able to show true veneration the 90s alternative sound like no one else has even come close to. It’s this package that makes their debut so notable and one of the year’s best and it’s exactly why more and more fans are coming around to Bognanno’s own attempt to make alternative rock as vibrant and infectious as it was two decades ago.

Bully descends on Richmond this Friday night at Strange Matter for an early show with Heat and Dead Soft opening. For more information on the show and where to buy tickets, click here.