Hardcore Makes A Welcome Return At The Camel

On a Tuesday night in September, North Carolina straight edge band Magnitude joined with a few Virginia bands to stir up some of that good old-fashioned HC energy. Hardcore novice Kieran Cleary was on hand to check out the scene and enjoy the overdue return of all genres of live music.

On September 21, Magnitude, a North Carolina straightedge hardcore band, headlined at Broad Street’s The Camel on a previously quiet Tuesday night, along with Virginia bands Fanfare, Reckoning Force, and another straightedge group, No Other Way. I drove down the strip, and with the sidewalks empty and the lit-up food places glowing, I could almost feel grit flaking off the curbs into the cool evening breezes that have recently arrived, bringing with them a promise of browning leaves. As new seasons refreshed and transformed the city, I was the escapist nerd venturing up the sleeping sidewalk.

Sometimes when I drive by, the Camel is the only place along Broad Street with a congregating crowd. It jumps out of the darkness, and the sudden movement startles and compels me. On September 21, I joined the crowd. The people were decidedly clad in black, while I was fresh (IRL grunging) from planet folk. Once I presented my vaccine card and funds at the gate, I walked up the hallway entrance to the venue and emerged into The Camel, no longer feeling out of place for a moment amid the mix of friendly patrons.

I arrived in time to hear the second of four groups of the night — VA Beach hardcore group Reckoning Force, a trio of musicians fronted by a lead screamer. They played great music and do have a particularly shreddy lead guitar. Then, from back in the bar area, I watched the occupants of every table stand up and head to the stage room for RVA pop punk group Fanfare. The youngest band of the three I saw, they stole my heart with a Jimmy Eat World cover. Where their original songs were concerned, I loved the lead singer’s vocals. There was a little of that abandon, calling-out, edge-of-screamo tone like in Paramore, but also a rumbly toughness from the music that fit the band nicely in between the hardcore acts. For their closing piece, Fanfare played a single, “Pulling Punches.” And when I checked out their Bandcamp discography afterwards, I also enjoyed the lyrics of acoustic tune “Cross My Fingers.”

The final act, Magnitude, included the lead singer from Fanfare on guitar. I heard a hint of a melody, almost, in one of their songs. At this performance, they dedicated one song to their choice to stay independent as a musical group, turning a cold shoulder to the commercial industry. I was fascinated, standing on a bench watching the skanking dancers. They cleared out the area in front of the stage for a bit, furiously windmilling their arms and flying up into a wall of people on the bench across from me like… Beyblades! in an arena. Thinking back to a nice-looking middle-aged couple I saw by the bar, I wondered for a moment if this dance is the modern version of the sprinkler.

Between songs, Magnitude thanked their audience, saying that hardcore music is the center of their lives and that they are glad to be back at live shows after a year and a half. Several t-shirts in the audience showed straight-edge solidarity. I watched one straight edge person clasp a bandmember’s hand in sincere thanks and thought to myself, “Even though this music is new to me, I’m just as grateful as they are to be back at a show.” All in all, I enjoyed the hardcore music of Magnitude best when I bowed my head and let the furiously changing rhythms roll right off my back.

If, last century’s 20s were the roaring twenties, today I was thinking maybe these 20s are the uncertain ones. Between sets, and even between songs, I felt a subdued atmosphere in this well-established bar. Maybe it was just comfort. Between sets, I ate sausage dip in little wonton wraps (with sriracha, obviously, but it was drawn on my plate like a spider web!), watched the end of Beetlejuice thanks to closed captions, and gazed as the bartenders emptied cases of PBR cans into bar coolers. All night long, I did not tire under the gaze of a small display of awesomely strange paintings that stared (or bared their teeth!) from their hangings on the acoustic sound panels.

I noticed the waves of people arriving for each different band and then leaving afterwards, wondering who the nice-looking middle-aged people were and then realizing, when they whipped out their cameras. How many youthful shows have I been to where the parents are in the crowd? Or some caring adult? Every single one. Meanwhile, I gloated because I basically wore pajamas. Me? In the pants? I’m unofficially covering the event! Beyond any journalistic duties, though, I was genuinely excited to be at my first hardcore show since supporting friends at AlleyKatz on the Shockoe Bottom cobblestones back in high school days. Here’s to many more. 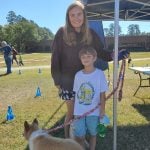