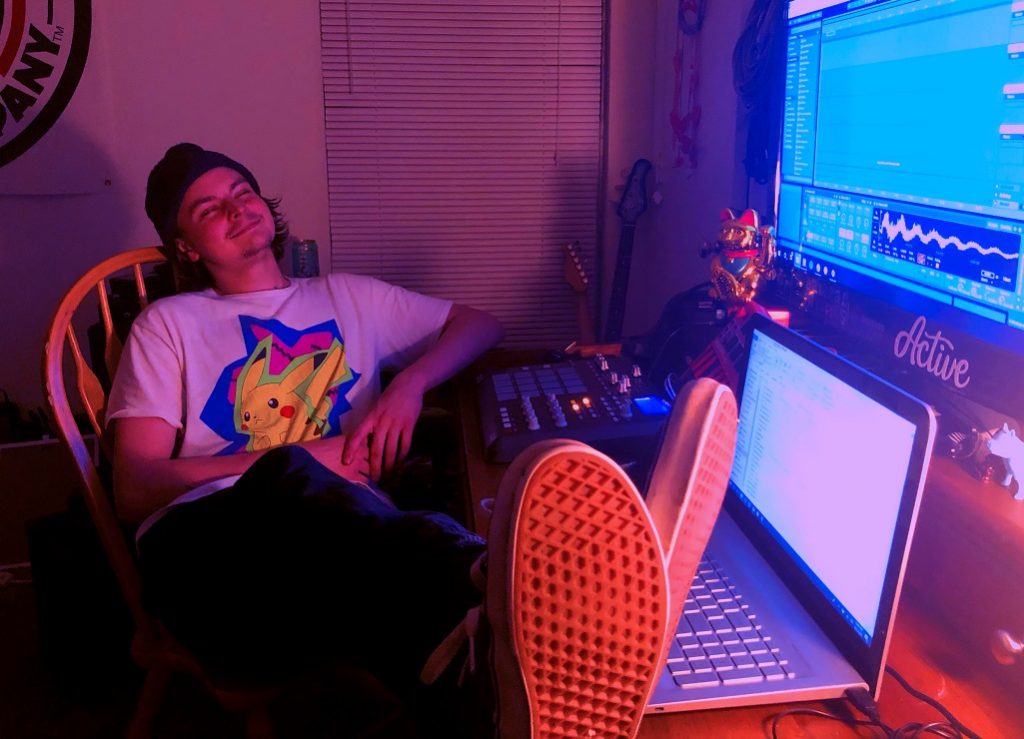 It’s no secret that Richmond has a prolific crop of hip-hop artists working to build on and expand elements of the genre – from scene stalwart McKinley Dixon’s full band jazz-rap, to Alfred’s sample-heavy, forthcoming Topshelf Records debut. The hard work and influence of these local heavyweights hasn’t just raken Richmond by storm, but seemingly the whole state – one need only travel an hour north on I-95 to Fredericksburg to see how this cultural movement is spreading.

Hidden Sound Collective is a new hip-hop collective based in Fredericksburg, named after the ninja villages of Naruto, which recently started hosting shows as well as releasing music under their own imprint.

“We found ourselves all hanging out all the time, making music together. Ya know?” said Kyle Guerra, beatmaker and core member of the collective. “We were all talking about how Kwamé [Pope], and his brother OC, have been a part of multiple groups and nothing ever really worked out. And nobody was actually productive… It all kinda started with me bein’ like, ‘Y’all don’t do anything, let’s do something. We can start like this.’”

“The whole thing was to really make a group that was truly for the culture of hip hop,” said rapper and Hidden Sound collaborator Dominique “Kwamé” Pope (who goes by Kwallah, the God when performing). “Just based around more local artists and local talent having a light to break and shine through [with].”

The collective recently put out its first official release, Kwallah, the God’s debut album $TRE$$ – a combination of classic hip-hop instrumentation with dark samples and contemporary sensibilities and flows. “The process for recording it was blood, sweat, tears and a lot of pain,” said Pope of the recording and production process. “It’s about going through a lot of transitional states and changes in my life. The only way I’ve really been able to think about things is through music. That’s how $TRE$$ was created, — just the personal problems of a young kid trying to figure stuff out.”

Pope’s been putting this one together for quite a while. “Believe it or not, the project is almost two years old,” he said. “I started working on [it] in almost 2017, and it’s just now coming out. So it took me a while to get through – but I had two years worth of stress.” The tape is almost entirely self-produced by Pope, adding to the level of self-sufficiency shown by the collective.

“It’s been very broken,” said Pope of the hip-hop scene in Fredericksburg. “There’s like 90 groups out here secretly, and out of the 90, maybe seven of them are actually doing something. It’s been a very fragile, broken piece of glass, and I guess Hidden Sound Collective is trying to it put back together.”

To Pope and Guerra, the problem is that people see making music as a competition to reach the best possible position. “Everybody wants to be on top,” said Pope. “Everyone thinks that there’s only one seat at the top, when in reality, ‘the top’ is an endless metaphor. It’s not straight up, it’s on a flat plane.”

Guerra concurred, mentioning that the collective’s members “would keep talking about how the other people trying to do hip-hop just weren’t doing it right, and how it was all just their internet presence. Everything looked really fake, and just for money.”

For Hidden Sound Collective, it is definitely not about money. “We make music because we have to, because it helps us through things,” Guerra said. “We’re not trying to get paid off of it.”

For Guerra, coming from a background in the DIY hardcore/punk scene — he plays bass in Fredericksburg screamo band Infant Island — the weirdest part of the hip hop scene was the lack of community support and encouragement between its members. “Nobody’s actually helping each other out,” Guerra reflected. “There’s no community.”

Guerra sees the lack of community reflected in the way a lot of Fredericksburg hip hop shows are organized. “These shows aren’t even fun to go to. They have the façade of being poppin’ shows, but they have like 12 performers a show, and every performer has to pay to play. They [each] get on stage, play like two songs, and then it’s the next person.”

Pope doesn’t even think anyone involved with the scene is happy with the situation — it’s just all they know. “Everyone’s hating, everyone’s upset. You get a show and don’t put someone on the ticket, and it’s a problem,” he said. “That’s what we try and avoid, by just doing it with the people that we want to do it with, because they’re friends and family – and they have the vision of doing it more for the culture, rather than for the clout or money or any of that.”

Hidden Sounds Collective hope their work can present the Fredericksburg hip hop scene with a viable alternative. “I’m trying to actually help people put their shit out, show the community what they’re doing, and help that flourish, instead of making money off those people,” said Guerra. “That’s just detrimental to the artists, if you ask them to pay money to be able to [play a show]. Then you’re just leeching off of your community – we’re trying to do the exact opposite of that.”

Hidden Sound Collective has multiple releases planned for 2019, as well as a variety of other projects and shows. “We’ve got about four different projects that will be done before the end of the year,” said Pope.

Guerra proceeded to rattle off a list of upcoming planned releases — a new mixtape featuring Pope’s rapping and Guerra’s production, a mixtape by collaborator Phwaygo Dharma, a beat tape of his own that he plans to surprise everyone with, and a whole bunch of shows, including a winter tour. It’s clear that these guys are staying productive. But for them, it’s just business as usual.

“We’re just going to keep trying to book shows and bring outside people to Fredericksburg,” Guerra said. “Those are the plans for this year — just trying to learn how to run a label better.”